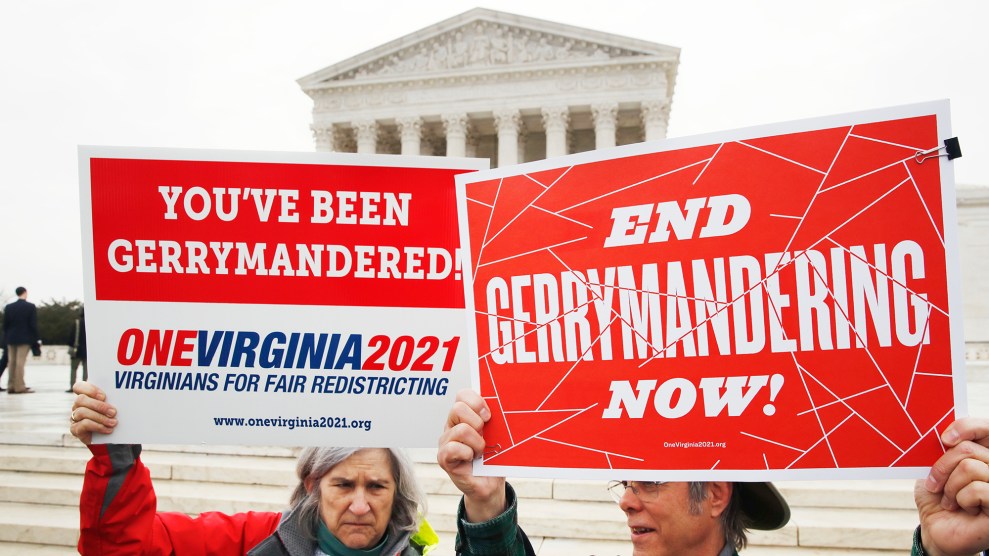 The Supreme Court on Monday opted not to rule on one of the most politically fraught issues it faced, instead sending two major gerrymandering cases back to lower courts on procedural grounds.

The cases, out of Wisconsin and Maryland, had the potential to reshape political maps across the country by sanctioning or restricting states’ ability to draw districts for one party’s political advantage. Now, any ruling on the constitutionality of extreme political gerrymanders will have to wait, and the contested maps will remain in place for the time being.

One case concerned Wisconsin’s heavily gerrymandered state legislative districts, drawn in 2011 to give Republicans a majority for the entire decade. In 2012, Democratic legislative candidates won more than 51 percent of the vote statewide, but Republicans won 60 of 99 seats in the state assembly. Democratic voters sued, arguing that the map violated their rights by preventing them from electing the representatives of their choice.

But Chief Justice John Roberts remanded the case to the district court over the question of the plaintiffs’ standing—whether they had a right to bring the case at all. The plaintiffs, he wrote, will now have the opportunity to buttress their argument that they were in fact hurt by the statewide map, a necessary precondition for them to sue. The court ruled that the voters challenging the map had failed to prove an individual injury to themselves and instead focused on a broad injury to Democrats.

The chief justice wrote for a unanimous court, except for Justices Clarence Thomas and Neil Gorsuch, who declined to join only one section of the ruling.

In the Maryland case, the court unanimously decided to stick to the technical details of the case: whether Maryland’s current map can stay in place while it is being challenged on First Amendment grounds. A federal district court had allowed the current map to remain in place as it deliberated, and the Supreme Court upheld that decision. But the Supreme Court opted not to address the tougher question concerning the constitutionality of gerrymandering for political gain, instead sending the matter back to the district court in Maryland to rule on it.

The case, argued in March, featured a different novel argument against partisan gerrymandering. Unlike in Wisconsin, it was Democrats who had rejiggered district lines to turn a solidly Republican congressional district into a reliably Democratic one. In 2011, Democrats shifted district lines so that Maryland’s 6th District—previously rural and Republican-leaning—now included heavily Democratic suburbs of Washington, DC.

Republicans in the district sued, arguing that the new map violated their First Amendment protection against retaliation on the basis of their political beliefs. The argument was tailored to appeal to Justice Anthony Kennedy, considered the swing vote on this issue. In 2004, Kennedy hinted that he might be willing to limit partisan gerrymandering under the First Amendment. But on Monday, neither Kennedy nor the other justices appeared ready to tackle the big constitutional questions at the heart of the gerrymandering issue.

The justices struggled over the past year with the question of political gerrymandering in these two cases. The cases appeared to offer the justices an opportunity to strike down gerrymandering without favoring one political party, since the Wisconsin maps were drawn by Republicans and the Maryland ones by Democrats. During a hearing in the Maryland case this spring, a majority of the justices appeared to agree that extreme gerrymandering that entrenches a party in power is a problem in modern politics. But there was no consensus on how to fix the problem or whether there was a constitutional principle at stake that justified the court’s intervention in map drawing, which has traditionally been left to the states.

The Supreme Court has long protected racial minorities from discrimination in gerrymandering, but it has never before restricted gerrymandering on the basis of partisan affiliation or past voting behavior. In the absence of court intervention, extreme political gerrymandering has become an increasingly pervasive facet of American politics in the last decade. Armed with ever-advancing technology that allows map drawers to assess the political leanings of districts down to the city-block level, legislatures across the country drew maps for Congress and statehouses that protected the majorities of those in power. Now that the court has declined to step in, continued advances in data analytics threaten to make partisan gerrymandering even more extreme in 2021, when the next round of redistricting takes place following the 2020 census.

Though the problem isn’t limited to one party, Republicans—who controlled more statehouses during the last redistricting period in 2011—enacted the most extreme gerrymanders in the country’s history. In purple states such as Ohio, North Carolina, and Michigan, Republicans managed to lock Democrats out of power and sent majority-Republican delegations to Congress for what is likely to be the entire decade. Because the court declined to resolve this issue, extreme gerrymanders will remain in place for at least one more election cycle, if not for the next decade.