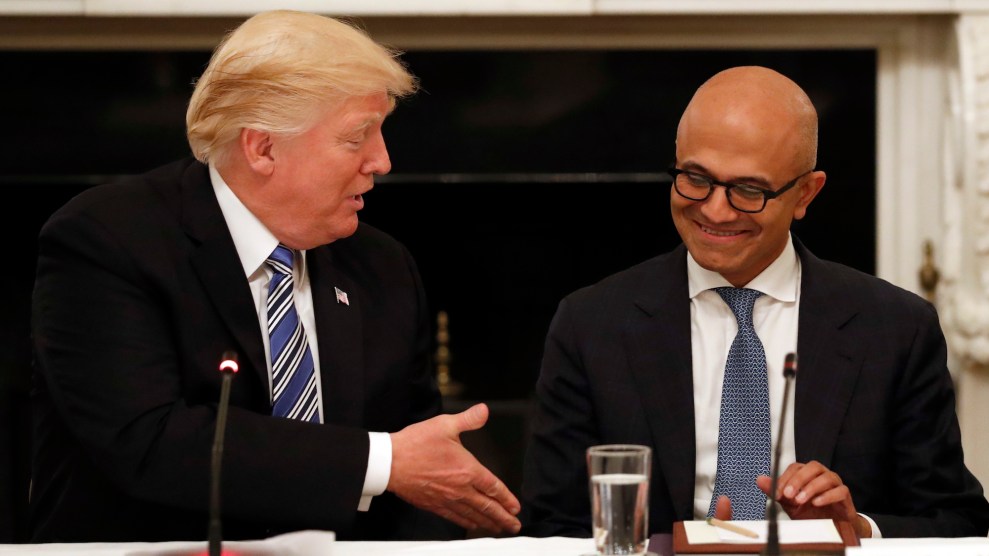 The problem? In March, Beinoff’s company signed a contract with US Customs and Border Patrol (CBP) to provide cloud services in order to boost the agency’s hiring efforts, something that CBP has long struggled with. And at Microsoft, employees have organized to demand that Microsoft cancel its $19.4 million contract with Immigration and Customs Enforcement (ICE) for data processing and, potentially, facial recognition software.

An NBC investigation also identified active contracts between ICE and a host of prominent tech companies—Hewlett Packard Enterprise, Thomson Reuters, Motorola Solutions, and Palantir—each worth tens of millions. Dell also has contracts with ICE, the Verge reports — including for licensing of Microsoft products. Many of these contracts go as far back as 2003, according to records available at USAspending.gov. Tech companies have long vied for lucrative military and police contracts which historically leaned towards technical support, but now involve more sophisticated offerings like artificial intelligence and surveillance technologies.

“We are not working with US Customs and Border Protection regarding the separation of families at the border,” a Salesforce spokesperson wrote to Mother Jones in an email. “And we are not aware of any Salesforce services being used by CBP for this purpose.”

Tech’s courting of the agency responsible for implementing the Trump administration’s border policies is just the latest flashpoint in an ongoing struggle between workers and advocates pushing against inequalities proliferated by industry, and tech giants trying to secure lucrative government contracts. The two sides have disagreed when it comes to defining ethical boundaries for services that could have negative or unintended consequences for the most vulnerable Americans.

Back in January, Microsoft announced in a blog post that the company would offer Azure, its cloud computing software, to ICE. “ICE’s decision to accelerate IT modernization using Azure Government will help them innovate faster while reducing the burden of legacy IT,” the Microsoft release said. “The agency is currently implementing transformative technologies for homeland security and public safety, and we’re proud to support this work with our mission-critical cloud.”

Microsoft briefly removed the language on Monday before reinserting it, telling Wired that the action was a “mistake.” By Tuesday night, CEO Satya Nadella had sent an all-staff email to employees stating that he was “appalled at the abhorrent policy of separating immigrant children from their families at the southern border of the US,” but reinforced that Microsoft’s work with ICE was not related to that policy.

The response, which did not explicitly mention Azure’s facial recognition software, didn’t satisfy employees. In an open letter published to an internal message board and then released by the New York Times, over 100 employees demanded that Microsoft immediately cancel it’s $19.4 million Azure contract with ICE. The Tech Workers Coalition, a labor and organizing coalition for tech workers and advocates based in the Bay Area, is also calling for Microsoft to the end the contract.

“We stand in solidarity with Microsoft workers who commit to never ‘just follow orders,'” a Tech Workers Coalition spokesperson wrote to Mother Jones, “but to hold ourselves, each other, and the industry accountable. Microsoft should abandon its Azure Government project with ICE.”

One employee, who spoke with Vanity Fair, likened to the situation to “IBM’s work during the Holocaust,” referring to the company’s alleged work with Nazis during World War II.

The Microsoft protests come just weeks after employee protests at Google prompted the company’s to not renew its contract to provide the Pentagon with artificial intelligence to analyze drone footage.

The ACLU is also questioning the close ties between tech and the police state. In late May, the organization broke the news that Amazon was selling facial recognition technology to police. On Monday, the ACLU delivered a petition of 150,000 signatures and a letter from a coalition of 70 organizations asking the company to cease sales.

Shankar Narayan, director of the Technology and Liberty Project at ACLU of Washington, says that the same things they’re asking of Amazon goes to other vendors, including Microsoft. Narayan pointed to Microsoft’s failure to outline what exactly would cause it to prohibit a company from using Azure’s facial recognition software. (The company claims to have cut off access to its surveillance services to other partners in the past but did not specify a reason).

“Any engagement with any government has been and will be guided by our ethics and principles,” Nadella wrote in his letter to employees. “We will continue to have this dialogue both within our company and with our stakeholders.”

Increasingly, the ACLU has turned to highlighting the experiences of communities impacted by these technologies as a way to put a face to the conversation. “I live and breathe this stuff and I was actually moved by [the community advocates we’ve had speak] because I don’t think it’s a perspective you hear every day,” says Narayan.

In response to fiasco around Project Maven, Google’s CEO Sundar Pichai published a blog post outlining the companies principles for ethical use of AI. The post said that Google would not pursue “technologies that gather or use information for surveillance violating internationally accepted norms,” something that activists have pointed out are still far from defined. Such guidelines also don’t protect from the actions of allegedly rogue employees, such as seen in case of data-mining provided by Palantir to Cambridge Analytica.

A representative for Microsoft referred Mother Jones back to Nadella’s letter and declined to comment any further.