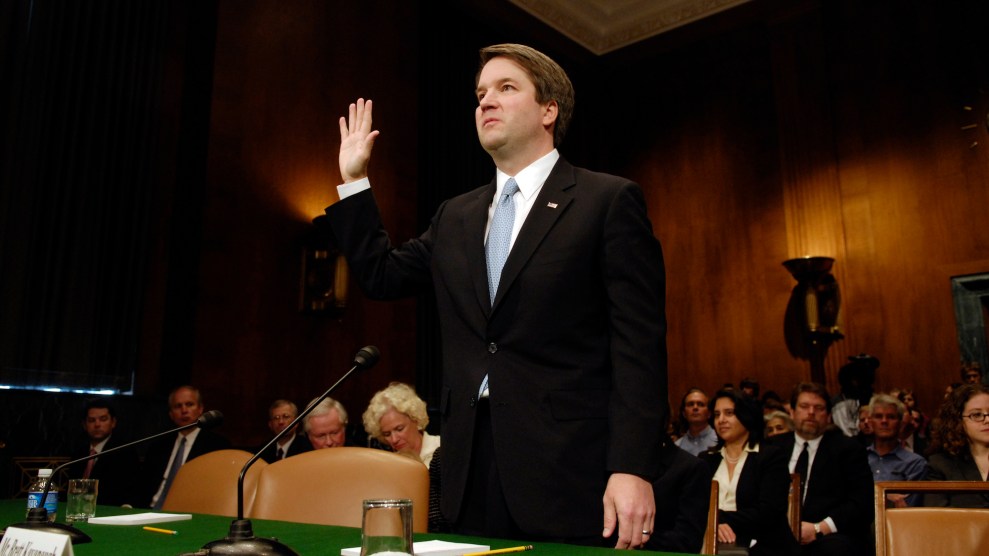 Brett Kavanaugh is sworn in at the Senate confirmation hearing on his nomination to the DC Circuit Court of Appeals in 2006.CQ Roll Call/AP

As soon as Supreme Court Justice Anthony Kennedy announced his retirement Wednesday, people started taking bets on whom President Donald Trump would nominate to replace him—sometimes literally. Online betting isn’t legal in the United States, but an Australian online bookmaker, sportsbet.com.au, posted its odds for the leading Supreme Court candidates, and the site—like the Washington chattering class—pegs Brett Kavanaugh as the favorite.

So who is Kavanaugh? The 53-year-old currently sits on the US Court of Appeals for the DC Circuit. Elevating him to the Supreme Court wouldn’t add much diversity to the high court, but it would add a reliably conservative vote.

Kavanaugh was born and raised in the Beltway—in Washington, DC, and the tony suburb of Bethesda, Maryland, respectively. He would be the fourth sitting justice to have graduated from Yale Law School and the sixth Catholic on the current bench. A former Kennedy clerk, he is a longtime active member of the Federalist Society, the conservative legal outfit that has played a key role in Trump’s judicial appointments.

Kavanaugh first emerged as a rising GOP star in 1994, when he joined the legal team of independent counsel Kenneth Starr, a former solicitor general for whom he’d worked during the George H. W. Bush administration. Starr’s investigation into an Arkansas real estate deal by Bill and Hillary Clinton morphed into a prurient examination of the former president’s affair with intern Monica Lewinsky. Kavanaugh led the investigation into the suicide of Deputy White House Counsel Vince Foster, which gave birth to conspiracy theories that the Clintons killed him. Kavanaugh was later a primary author of the Starr Report, which read like a steamy romance novel with lines like, “On all nine of those occasions, the President fondled and kissed her bare breasts.”

In those heady days, Kavanaugh traveled in a circle of budding GOP legal eagles, including Fox News host Laura Ingraham, current Health and Human Services Secretary Alex Azar, and clerks for conservative Supreme Court justices Antonin Scalia and Clarence Thomas. Kavanaugh’s presence in right-wing political circles landed him a cameo in Blinded by the Right, a book by conservative operative turned Democratic fundraiser David Brock. Brock wrote that during the Whitewater investigation into the Clinton Arkansas real estate deal, he once attended an event at Ingraham’s house to watch one of Clinton’s State of the Union addresses. When the cameras panned to first lady Hillary Clinton during the speech, Brock said he witnessed Kavanaugh mouth the word “bitch.”

In an interview, Brock says Kavanaugh in those days “was a very recognizable type in Washington: a young Federalist Society lawyer on the make in the conservative movement. He thought his ticket was helping bring down the Clintons.”

Kavanaugh so frequently inserted himself into high-profile political battles that during his confirmation hearing for his DC Circuit seat, Sen. Dick Durbin (D-Ill.) called him the “Forrest Gump of Republican politics.”

In 1999, Kavanaugh represented two members of Congress who filed a brief in a Supreme Court case supporting a New Mexico school district’s effort to maintain student-led prayers at football games. (The court found the prayers unconstitutional.) The following year, he got involved in the case of Elián González, the young Cuban boy who came to the United States after his mother drowned trying to bring him to the country, prompting an epic custody fight between his father in Cuba and his relatives in Miami. Kavanaugh worked pro bono for González’s Miami relatives in their vain appeals to keep the boy in the United States.

That same year, Kavanaugh represented former Florida Gov. Jeb Bush in his fight to overcome constitutional hurdles to his controversial school voucher program that would direct public money to private religious schools. And when the 2000 election came down to some hanging chads in Florida and a contentious recount, Kavanaugh was there, too, working on George W. Bush’s legal team.

After the Supreme Court ruled in Bush’s favor, essentially awarding him the presidency, Kavanaugh landed a coveted spot in the White House counsel’s office, where he helped Bush select judicial nominees. Eventually, he became one of them. In 2003, Bush nominated Kavanaugh to a seat on the influential DC Circuit, often considered a stepping stone to the Supreme Court. Three current justices have served there, as does Merrick Garland, former President Barack Obama’s nominee for the high court whose confirmation was blocked by Senate Republicans.

Elevating Kavanaugh to the Supreme Court wouldn’t add much diversity to the high court, but it would add a reliably conservative vote.

Democrats aggressively opposed Kavanaugh’s nomination, in part because of his political résumé, but also because he had never tried a case and had very little experience with criminal law. Durbin observed during Kavanaugh’s confirmation hearing that he was nominated with “less legal experience than virtually any Republican or Democratic nominee in more than 30 years. Of the 54 judges appointed to this court in 111 years, only one—Kenneth Starr—had less legal experience. That is a fact.”

The American Bar Association, which initially rated Kavanaugh “well qualified,” downgraded that assessment to “qualified” after interviewing people who had worked with him. In its report, the ABA noted, “One judge who witnessed the nominee’s oral presentation in court commented that the nominee was ‘less than adequate’ before the court, had been ‘sanctimonious,’ and demonstrated ‘experience on the level of an associate.’” His nomination stalled for three years before he was finally confirmed in 2006.

Lawyer and court watcher Adam Feldman recently wrote on his blog Empirical SCOTUS that in his 12 years on the DC Circuit, Kavanaugh has penned opinions “almost entirely in favor of big businesses, employers in employment disputes, and against defendants in criminal cases.” Kavanaugh made a name for himself as a staunch opponent of the Obama administration’s environmental agenda. His dissents in cases involving the Environmental Protection Agency often seemed to sway the Supreme Court.

He has supported the Trump administration’s efforts to prevent a pregnant immigrant girl from obtaining an abortion, supported the use of military commissions to keep Guantanamo Bay prisoners out of federal courts, and attacked Sen. Elizabeth Warren’s pet project, the Consumer Financial Protection Bureau. In 2016, he wrote a 101-page majority opinion for a three-judge panel decrying the agency’s “massive, unchecked” power and predicting that the Supreme Court would ultimately find its existence unconstitutional. The decision struck down the part of the law requiring that the president have cause before removing the agency’s director and that would have allowed the president to fire the director at will. But the decision was overturned a year later by the full DC Circuit. In a dissent in that case, Kavanaugh made an impassioned argument for protecting the rights of financial services providers, an argument dismissed by the majority as an “unmoored liberty analysis” that failed to take into account the individual liberty of the victims of those financial services corporations.

The future Supreme Court docket may have special relevance to Trump, and that could work in Kavanaugh’s favor. Trump, after all, has suggested that he has the power to pardon himself, a theory that’s never been tested but one that might become less theoretical should special counsel Robert Muller’s investigation into Russia’s meddling in the 2016 election ensnare Trump in a criminal case. The Supreme Court could ultimately decide whether Trump is right about the extent of his pardon power.

Trump is likely to make his Supreme Court pick in the coming weeks, and Senate Republicans have promised a vote on the nomination by the fall, before the midterm elections.