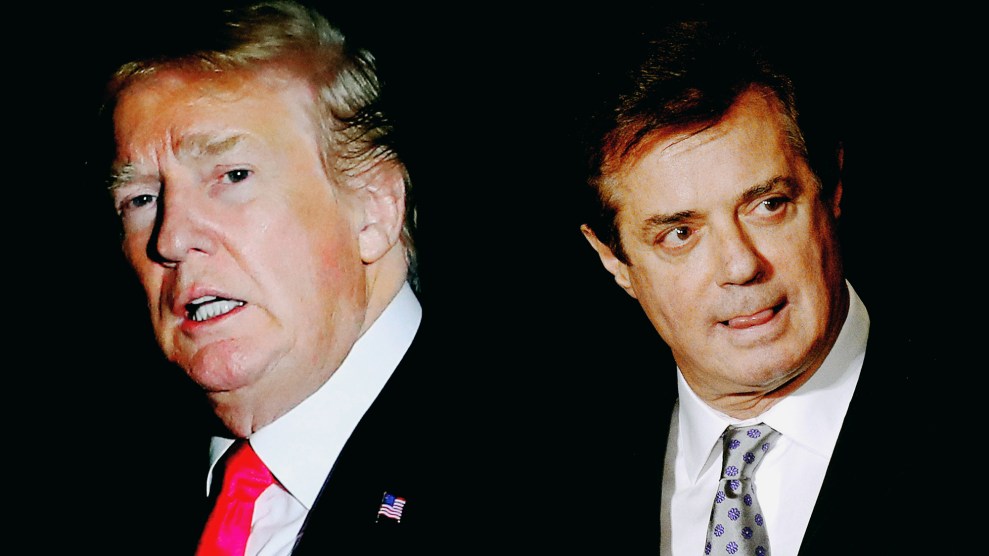 “We’ve seen a series of boneheaded moves throughout the scandal from the very beginning” of the Russia scandal, David told Mother Jones Senior Editor Aaron Wiener on this week’s episode of the Mother Jones Podcast.

“He has two GPS ankle bracelets—not one, but two!—and his travel is highly, highly restricted,” David said. And yet Manafort has managed, yet again, to put himself in the special counsel’s cross-hairs. “Not too bright.”

As David explains this week for Mother Jones in more detail:

To recap this curious episode: Just two months after Mueller slammed Manafort for scheming with Kilimnick, a former Russian operative, to get around the gag order, Manafort—who was under close watch by Mueller’s crew—again allegedly recruited Kilimnick for a criminal plot to encourage perjury…  it’s hard to imagine that when Mueller and his team of prosecutors discovered Manafort’s latest scheme with Kilimnik, they weren’t shaking their heads in wonder and disbelief.

Also on this week’s show, extraordinary stories of living in limbo: You’ll hear from Mother Jones readers who have had their lives upended by Trump’s travel ban and are now awaiting a fateful Supreme Court decision on the policy—coming any day now.

In January, Mother Jones asked readers to share their stories about how the ban has affected them. That’s how Anthony found us and shared the Kafkaesque nightmare of being separated from his boyfriend, Reza, an Iranian refugee who fled his home because the police found out he was gay. Podcast producer Ashley Dejean published Anthony’s story in March, and it was so powerful, we wanted you to hear from him directly on the podcast.

“We just try to have faith that love will find a way and then eventually we’ll be together,” Anthony told podcast host Jamilah King. “But we’re still hanging in there, and we’re still trying to find a way.” (We’re withholding his last name to protect his privacy.)

And of course, as always, you’ll also hear from reporter David Beard with his weekly dose of uplifting news from the Recharge newsletter. Sign up for more here.