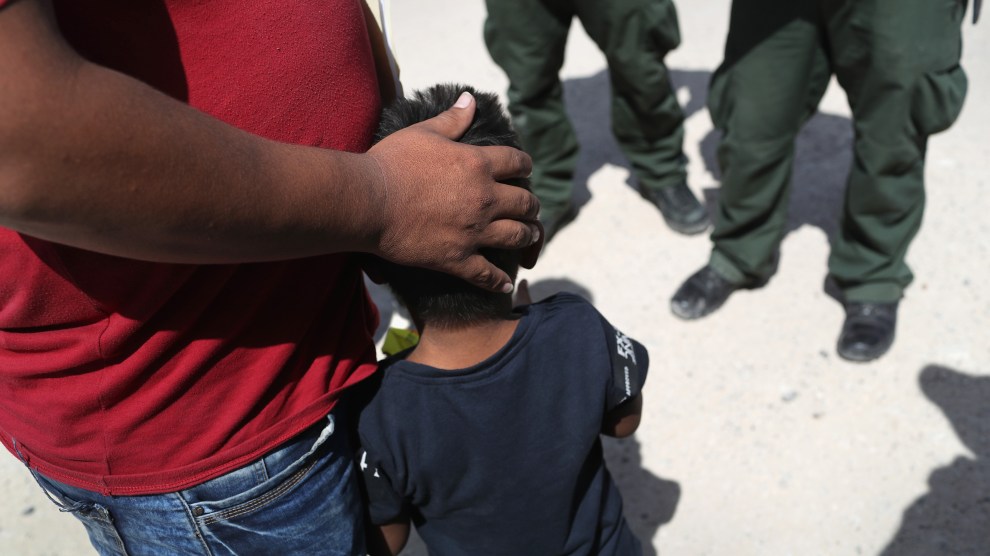 U.S. Border Patrol agents take a father and son from Honduras into custody near the US-Mexico border on June 12, 2018.John Moore/Getty Images

Two immigrant children who were separated from their parents at the southern border have had their constitutional rights violated, a federal judge in Connecticut ruled late last week in yet another blow to the Trump administration’s draconian immigration agenda. Judge Victor Bolden also ordered on Friday that the federal government produce the children’s parents in court this week and present a plan for addressing how to treat the children’s post-traumatic stress disorder brought on by the separation.

Connecticut Legal Services, who represented the children alongside the Worker and Immigrant Rights Advocacy Clinic at Yale Law School, said it was the first case in the county brought on behalf of separated children, rather than parents, to challenge the Trump administration’s policy on forcible family separation. Judge Bolden’s decision is also believed to be the first to find that the government’s policy violates the constitutional rights specifically of the separated children, not just the parents. While the ruling applies only to the two children named in the lawsuit, experts say it could be used as a template for other actions on behalf of separated children, or for judges facing similar legal challenges across the country.

“The government failed to provide the children with notice or a hearing, instead taking their parents, while distracting the children.”

On Friday, Bolden said the court concurred that the children’s constitutional rights had been violated, ruling that “[t]he government failed to provide the children with notice or a hearing, instead taking their parents, while distracting the children.” Bolden also noted that “[e]ven now, the government has not established a compelling reason for depriving the children of their family integrity.”

Bolden’s decision follows a ruling by Judge Dana Sabraw in California on June 26, which found that parents’ constitutional rights were violated when they were separated from their children after crossing the US southern border. As a class-action lawsuit, that decision has affected thousands of  children who must now be reunited with their parents by July 26, though it’s still unclear if the government will meet the deadline.

Geoffrey Hoffman, director of the University of Houston Law Center Immigration Clinic, said the government’s concession to violating the children’s constitutional rights was “striking.” In contrast, during the California case, the government argued that “separation of plaintiffs [the immigrant parents] from their children does not violate the Fifth Amendment.” This time it appears the government has not contested that claim.

While the Connecticut ruling officially affects only the two children, identified in court documents as “J.S.R” and “V.F.B.,” Hoffman says it has the potential to inspire more groups to file challenges on behalf of children—and provide a template for other judges to get children the constitutional protections and care they think they need. “I’ve seen it here in Houston, and I’m sure in other cities attorneys are getting together and considering these types of individual actions,” he said.

Nonetheless, lawyers warned that litigating for individual families’ reunification would not solve the broader problem. A case like this, Aseem Mehta, a law student intern with the Yale clinic, said, is “not going to be the avenue through which all those who are affected are going to get what they are due.” He added, “We need to see actual policy changes and action by the government, not just to respond to our petition in releasing these two families, but the demand that every single family be treated like our clients.”

This is particularly urgent, as many of the children currently held in US custody hold similar stories to those of J.S.R and V.F.B. Both children fled their countries after witnessing violence and were quickly separated from their respective parents after crossing the border.

According to court documents, J.S.R, a nine-year-old boy, escaped Honduras after experiencing gang violence and witnessing the mutilated body of his grandmother. He fled with his father following repeated threats toward his family from gang members. Court documents say that after arriving in the US, J.S.R. described being held in an “ice box” or “freezer” before being transferred to a detention center. There, the boy was told his father was going to sign some paperwork and that he would be right back. He never returned. J.S.R. was kept “in a windowless cage” with other young children for approximately four days. His father remained in a Texas detention center, while the boy was transferred to Connecticut.

One day, V.F.B. went to take a shower. When she returned, her mother was gone.

V.F.B., 14, fled El Salvador with her mother after her step-father was killed by a gang. They crossed into Texas in mid-May, where they were held “in freezing conditions.” One day, V.F.B. went to take a shower. When she returned, her mother was gone. Like J.S.R, the teenager was taken to Connecticut while her mother remained in detention in Texas.

In addition to ruling that the separation violated the children’s constitutional rights, a crucial and unusual component of Bolden’s decision was an order for the children to receive treatment for the psychological trauma they have suffered. Child psychiatrist Andrés Martin testified that both children were suffering from post-traumatic stress disorder brought on by the separation from their parents. In both cases, he said the journey to the United States had not been “especially traumatic” for the children, but that being separated had had a severe effect on their mental health. “J.S.R. does not sleep well, does not trust adults, and is depressed and tearful,” Martin stated in the ruling. Meanwhile, V.F.B. was so distressed during her interview with Martin’s team that she could not answer their questions coherently.

The lawsuit also sought to immediately reunite the children with their parents. While Bolden turned down the request because of the previous reunification ruling by Judge Sabraw in California, on Monday the government filed a notice in federal court promising to reunite the two children with their parents and release the families on parole. That afternoon, the families were reunited.

Yet despite J.S.R and V.F.B.’s reunion, and Sabraw’s California ruling, thousands of children remain separated from their parents—a situation identified in Bolden’s ruling as the cause of “significant and ongoing trauma.” In Connecticut, lawyers are scheduled to go back to court Wednesday July 17 to present treatment plans to address J.S.R and V.F.B’s psychological injuries.

“We’re celebrating, but with a little bit of caution,” Joanne Lewis, head of Connecticut Legal Services’ immigration unit, said. Although the two families face an ongoing legal battle to stay in the US, “at least they’re together, and they know they’re going to be together. They have some time to plan and to heal.”