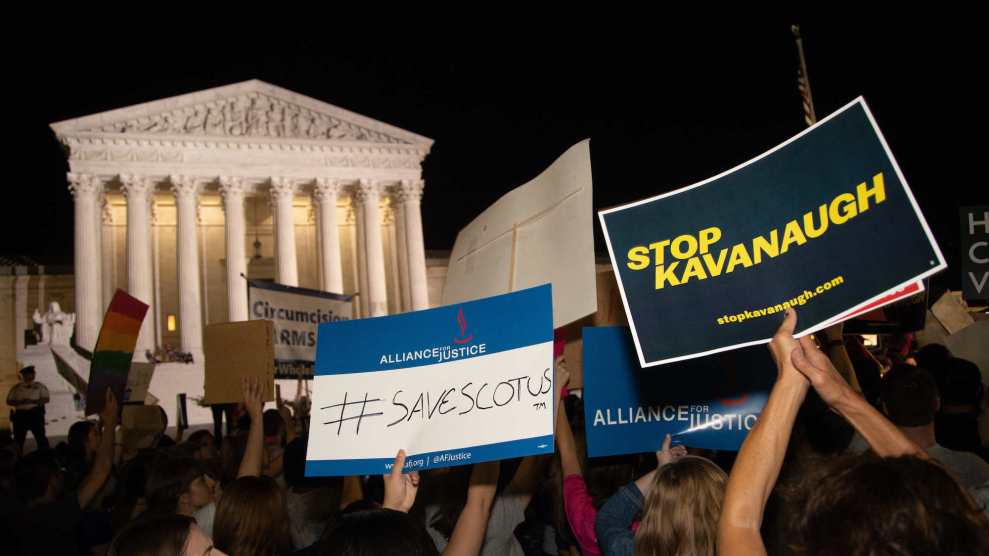 When Donald Trump announced his selection of Brett Kavanaugh to the Supreme Court, gun rights’ groups were quick to celebrate the president’s pick. “President Trump has made another outstanding choice in nominating Brett Kavanaugh for the Supreme Court,” Chris Cox, the executive director of the National Rifle Association’s lobbying arm, said in a statement following Trump’s announcement on Monday night. “He has an impressive record that demonstrates his strong support for the Second Amendment.”

#ScotusPick “On behalf of our six million members, the NRA strongly supports Judge Brett Kavanaugh’s confirmation to the U.S. Supreme Court. We will be activating our members and tens of millions of supporters throughout the country in support of Judge Kavanaugh." – @ChrisCoxNRA pic.twitter.com/SeC3bcjXVK

Kavanaugh’s record on guns aligns well with the NRA’s priorities. In a 2011 legal challenge to DC’s assault weapons ban, Kavanaugh issued a dissenting opinion that asserted assault weapons are within the scope of the Second Amendment, a move that breaks with Supreme Court precedent. And the Trump administration, too, has been a good ally to the NRA—President Trump received over $30 million in campaign support from the group, met with the NRA’s Cox at the White House in March—weeks after the February school shooting in Parkland, Florida, that left 17 dead—and spoke at the NRA’s annual convention in Dallas earlier this year.

Everytown for Gun Safety, the gun safety organization founded by billionaire and former New York City Mayor Michael Bloomberg, wants to see how deep those aligned interests go. The group tells Mother Jones that they have filed Freedom of Information Act inquiries with the offices of the Attorney General, the Deputy Attorney General, Public Affairs and Legal Policy to locate any record of communication between Justice Department employees and the NRA surrounding Kavanaugh’s nomination or the retirement of Justice Anthony Kennedy, whose vacancy made way for Kavanaugh’s nod.

“President Trump promised NRA leaders he would never let them down, and by nominating Judge Brett Kavanaugh to the Supreme Court he made good on that promise,” Nick Suplina, managing director for law and policy at Everytown, said in a statement. “Kavanaugh’s judicial record demonstrates a dangerous view of the Second Amendment that elevates gun rights above public safety. The American people deserve to know whether the NRA played a role in his selection.”

What the FOIA inquiries will reveal, and that information’s impact on Kavanaugh’s confirmation, remains to be seen. Freedom of Information Act inquiries can take weeks, months, or even years to return, and there’s no certainty that any communication regarding the NRA and Trump’s SCOTUS pick will be discovered. Gun safety group’s past attempts to retrieve information about the connection between the President Trump’s judicial nominations and the NRA have been met with resistance. In 2017, Giffords—the organization founded by former Arizona congresswoman and gun violence survivor Gabby Giffords—sued the Department of Justice for failing to respond to a similar request for communications between the NRA and the Trump administration during the selection of Supreme Court Justice Neil Gorsuch.

Everytown’s FOIA request is one of many tactics national gun safety groups are employing to stymy Kavanaugh’s confirmation. The Brady Campaign to Prevent Gun Violence told Mother Jones that the group is authoring a list of questions they would like Judge Kavanaugh to answer during his confirmation hearing. That list, which is still being finalized, will be shared with members of the Senate Judiciary committee, which is responsible for holding confirmation hearings and sending the nomination onto the entire Senate for a vote. The group has already setup conversations about those questions with the committee’s Democratic members. Giffords, meanwhile, has launched a digital campaign across social media that encourages voters to call their senators and ask them to vote against Kavanaugh’s confirmation, and has written a script to help them do so. The group has also implemented a phone service that automatically connects callers to their senators’ offices.

SPEAK UP: Judge Kavanaugh gives the NRA’s extremist views a seat on the Court — we must block his nomination. Call your senators and tell them to vote NO on Kavanaugh. https://t.co/MhePFCud98