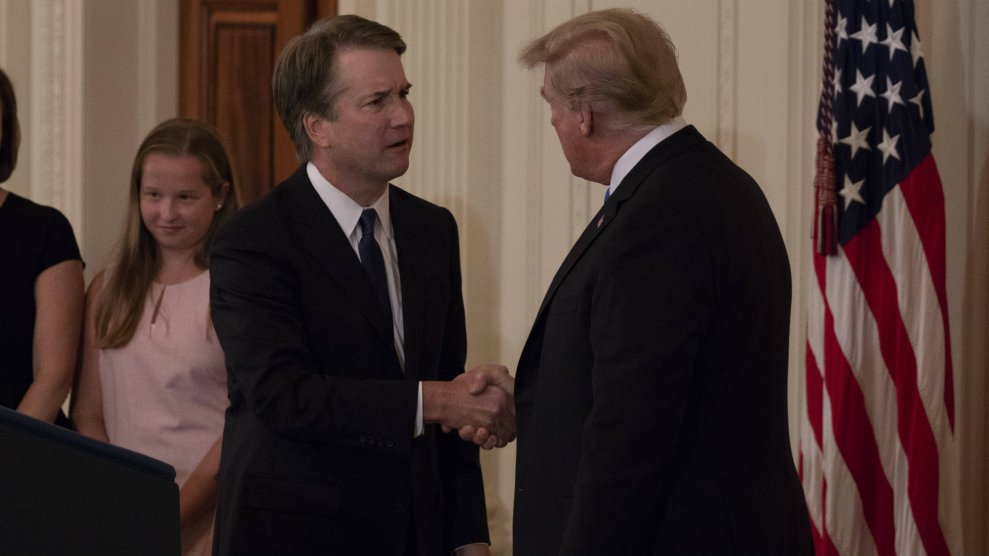 Brett Kavanaugh’s acceptance speech Monday night contained all the trappings one would expect from a nominee to the US Supreme Court. He thanked President Trump, introduced his wife and daughters, and nodded to the influence of Anthony Kennedy, the retiring Supreme Court justice he once clerked for and hopes to eventually replace.

But, notably, Kavanaugh’s speech diverged from his predecessors in one key aspect: extensive reference to his Catholic faith, including a special shout-out to one of Washington, DC’s most beloved religious leaders, Monsignor John Enzler.

Justice Neil Gorsuch, who attended the same Jesuit high school as Kavanaugh, vaguely thanked “my family, my friends and my faith” but failed to mention his Catholic upbringing when he accepted Trump’s nomination last year. Neither did Chief Justice John Roberts, Justice Sonia Sotomayor, or Justice Clarence Thomas in their first remarks as nominees. Not even the late Justice Antonin Scalia, a proudly devout Catholic who counted a priest among his sons, mentioned religion during his swearing-in ceremony.

Kavanaugh brought up Catholicism at several points in his 857-word speech, but reserved special attention for John Enzler, known as “Father John,” a legend in DC Catholic circles. Kavanaugh said:

I am part of the vibrant Catholic community in the DC area. The members of that community disagree about many things, but we are united by a commitment to serve. Father John Enzler is here. Forty years ago, I was an altar boy for Father John. These days, I help him serve meals to the homeless at Catholic charities.

As CEO of the Archdiocese of Washington’s branch of Catholic Charities, Enzler leads relief efforts for an organization that operates 58 programs in the DC area and supplies nearly 80 percent of the beds for the city’s homeless. Catholic Charities has fans from across the political spectrum, but like many other religious institutions, it opposed the Affordable Care Act’s mandate that contraception coverage be included in health care plans for employees. In 2012, Enzler’s organization joined hundreds of other Catholic groups to sue the Department of Health and Human Services over the provision. After Trump took office, HHS settled and allowed an exception to the mandate.

Enzler, who has deep roots in the District and formerly served as pastor of the Shrine of the Most Blessed Sacrament church in the city’s wealthy upper northwest corridor, attended the White House event on behalf of Catholic Charities.

Critics made much ado of one of Trump’s other finalists to the Court, Judge Amy Coney Barrett, a former law professor at Notre Dame whose appellate confirmation hearing included an exchange about “dogma” that rocketed her to fame in the right-wing Christian world. Kavanaugh had been widely seen as a less favorable selection for social conservatives, given his positions in cases involving abortion and health care that conservatives have argued were not strong enough.

Trump has said he did not ask Kavanaugh about the Court’s ruling in Roe v. Wade that upheld a constitutional right to an abortion, a decision many conservatives hope will be overturned. And, as even the Vatican’s own statements have suggested, a Catholic’s allegiance to the faith is no sure sign of their allegiance to the Church’s written doctrine.

But, as Kavanaugh now heads to the Senate, controlled by a threadbare majority of Republicans, he will need to assure social conservatives that he is not a candidate to be feared. His first remarks certainly did not work against that goal.