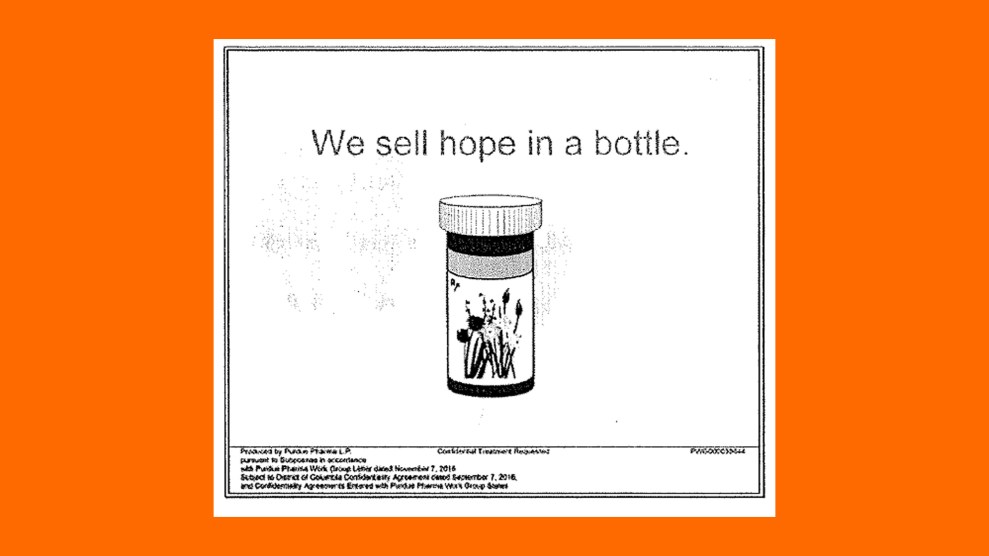 Purdue Pharma marketed opioids as "hope in a bottle," according to a guide for incoming marketing employees.Tennessee Attorney General's Office

In 2007, a sales representative for Purdue Pharma visited a family doctor in Kingston, Tennessee, to urge the physician to prescribe more OxyContin. The doctor was interested in pain management, but didn’t prescribe the opioid painkiller because he’d heard that it was often resold on the street. “Asked him why it mattered if thought was going to end on street?” read notes that the rep wrote after the visit. “Point well received.”

That’s according to a 278-page lawsuit filed in May by the state of Tennessee against Purdue Pharma and made public earlier this month after the company dropped its effort to keep the suit sealed. The opioid maker is facing dozens of lawsuits alleging that it helped plant the seeds of today’s spiraling overdose epidemic, but this appears to be the only complaint that relies heavily on notes that company sales representatives jotted down after each visit with a prescriber or clinic. (It’s not alone in the lawsuits: opioid manufacturers and distributors across the country are facing litigation, including this recent whistleblower case against prescription fentanyl maker Insys.)

Here are the highlights from the unsealed case in Tennessee:

In the decade following the Kingston doctor’s visit, Purdue’s 87 sales reps made nearly 300,000 prescriber visits. Like other opioid manufacturers, Purdue allegedly focused its efforts on high-volume prescribers—dubbed “super core” clinicians—and encouraged sales reps to “identify & engage next tier of ‘rising stars’ to expand roster,” according to a 2012 marketing PowerPoint. Reps were trained to underplay opioids’ addictive effects and encourage long-term use of the drugs at high doses—despite no evidence that the drugs are effective for chronic pain.

“[Provider] said he preffered to not use OxyContin first line because he feels once a [patient] is put on Oxycontin they never will try anything else becuase they like the drug,” wrote a sales rep in 2007 after visiting a Knoxville-area pain specialist. “I asked if that was a bad thing.”

“Pharmacy tech was riding me about oxycontin being a bad drug,” wrote a another rep after visiting a pharmacy in 2008. “Corrected her by saying good drug, bad people abusing it.”

The sales visits in Tennessee peaked in 2016. “Notably, Purdue increased its primary marketing tool in recent years in Tennessee even after receiving civil investigative demands and subpoenas from Tennessee and other Attorneys General, being sued in litigation across the country, and as the devastating effects of the opioid epidemic became better known,” the complaint alleges.

(Purdue announced in February that it was cutting its sales staff by more than half, and that remaining sales reps would no longer call on prescribers to market opioids.)

Purdue’s strategy for selling opioids was allegedly summed up with the tagline, “We sell hope in a bottle.” According to notes that sales reps took during training, the marketers were also taught to “follow the money,” “never give someone more info than they need to act,” “expand the physician’s definition of ‘appropriate patient,”‘ and “ABC”—”Always Be Closing,” a reference to movie Glengarry Glen Ross, about a real estate salesman who uses deceptive tactics to sell properties at inflated prices. Sales reps competed to be in the “Topper’s Club,” a group of top-selling reps who would win trips and money.

Purdue reps focused their efforts on general practitioners, internal medicine physicians, and other prescribers without pain management expertise, the suit alleges. Physician assistants and nurse practitioners, who Purdue found to be the fastest-growing group of opioid prescribers, were deemed to be “critical to our success; contributing to both volume and growth,” according to a 2015-2016 brand strategy training. “NPs and PAs desperately seek information, typically from sales representatives,” read a 2013 marketing plan.

Theoretically, if a sales rep was concerned that a doctor was running a pill mill, Purdue would investigate the doctor and, in some cases, put them on “cease calling status.” Yet the lawsuit documents numerous cases of sales reps continuing to call on high-volume prescribers long after noting shady practices indicative of pill mills, like long lines of patients waiting to see the doctor, armed guards in the waiting rooms, choreographed urine screenings, and patients paying with cash—signs, the suit alleges, that the pills were being re-sold on the street. Purdue allegedly called on two prescribers 48 times after the company had been told “directly by law enforcement officials that the pair was responsible for significant interstate diversion of OxyContin,” according to the complaint.

One of the state’s top prescribers was a family doctor named Michael Rhodes, who would prescribe more than 300,000 OxyContin pills between 2006 and 2015. Notes from a visit in 2008 indicate that Rhodes was running a pill mill—and the sales rep was concerned about it:

Had lunch today and went over the new savings cards…as I was sitting in his office, there were two patients in a knife fight outside the office’s front door, I overheard one of the patients saying he wanted his ID. Many patients were [loitering in] the office as they have the past two times I was in there. Concerned the doctor is being taken advantage of by some drug seekers. Dr. Rhodes said he does urine drug screens but tells the patient when he will do the next drug screen. Said he was trying to get the pain management forms together. Said he has many patients saying that their doctors are referring patients to him because they can’t write any narcotics but he can, he asked me why they cannot write it. Said his patient load that morning was 40 people for the morning that someone overbooked him.

Over the following years, there were more red flags. In 2009, a patient of Dr. Rhodes died of an OxyContin overdose. The same year, Tennessee’s Board of Medical Examiners fined Rhodes for prescribing medications without “performing adequate physical examinations.” In 2013, it placed the doctor’s license on 5-year probation; Rhodes admitted to “prescribing narcotics and other medications and controlled substances in amounts and/or for durations not medically necessary, advisable, or justified for a diagnosed condition.” All the while, Purdue’s law department had investigated Rhodes and determined that reps could keep calling on Rhodes—which they did, 31 times after his license was placed on probation.

In October of 2015, Tennessee revoked Rhodes’ license for repeatedly violating the terms of his probation. Six weeks later, according to the complaint, Purdue “finally placed him in cease calling status and instructed sales representatives that they ‘should not call on’ him.” (Rhodes’ license continues to be revoked, according to the state’s health department website. Attempts to reach Rhodes at numerous phone numbers were unsuccessful.)

Purdue marketed OxyContin—and opioids in general—via publications and online support groups for pain patients, the suit alleges. Exit Wounds, for example, was a publication for veterans, who were told that opioids are the “gold standard” treatment for chronic pain but that they are “often underused” due to fear of addiction. “Long experience with opioids shows that people who are not predisposed to addiction are unlikely to become addicted to opioid pain medications.”

In a statement, Purdue said it “vigorously denies” the state’s allegations. “The Attorney General claims Purdue acted improperly by communicating with prescribers about scientific and medical information that FDA has expressly considered and continues to approve,” it read. “We share the Attorney General’s concern about the opioid crisis. We are disappointed, however, that in the midst of good faith negotiations with many states, Tennessee has decided to pursue a costly and protracted litigation process. While our opioid medicines account for less than 2% of total prescriptions, we will continue to work collaboratively with the states toward bringing meaningful solutions to address this public health challenge.”