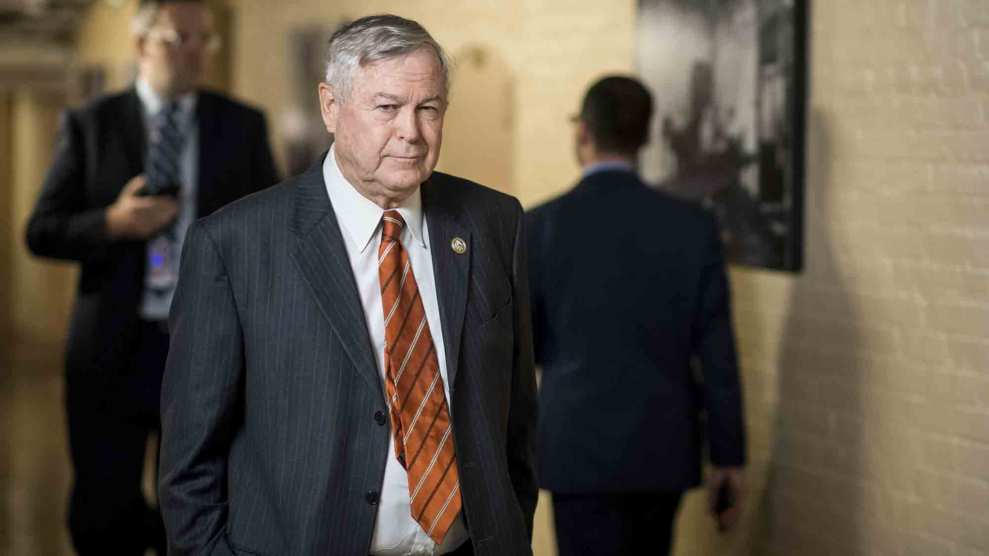 On Capitol Hill on Friday evening, I ran into Rep. Dana Rohrabacher (R-Calif.), who has earned the moniker “Putin’s favorite congressman.”  In recent days, he has been linked in news reports to Maria Butina, the 29-year-old Russian woman who had spent years cozying up to the National Rifle Association and other conservative outfits and who has been accused by federal prosecutors of being a spy for Moscow. “Some week, eh?” I said to him. He shot me a quizzical look. “Why?” he asked.

I thought it was obvious, and noted that his connection to Butina had made the headlines. ABC News reported that Rohrabacher was at a dinner in 2017 in Washington that Butina attended and that two years earlier, Butina had set up a meeting in St. Petersburg for him with Alexander Torshin, a Kremlin-connected banker and senior member of Vladimir Putin’s political party.

If Cohen’s account is accurate, I asked, doesn’t this show Trump colluded with a Putin-ordered operation to attack a US election? How is that nothing? “There’s not a person in this town who would not take a meeting to get material like that,” Rohrabacher shot back. He suggested he would.

Oh, he scoffed, that’s all nothing. He insisted he had no contact with Butina at the dinner: “She was at the other end of a table of 30 people and now they say I ‘dined’ with her.” Rohrabacher asserted he had never met with Butina, but did acknowledge she was present when he met with Torshin. (Torshin has been accused of money laundering related to Russian organized crime; he has denied the charge.)

Rohrabacher went further and dismissed the entire Butina case. “This is fake news,” he said with a snort. “The charges are BS. She was just a gofer.” The US government, though, has alleged she was part of a Russian influence operation directed by Torshin. The two had sought connections with the Republican Party and conservative organizations, and during the 2016 election they had used these ties to try to set up a meeting between Donald Trump and Putin. But Rohrabacher said the indictment was all bunk.

Sensing that I was not going to get anything but derision from Rohrabacher on the Butina front, I shifted subjects and asked him about the latest Trump-Russia bombshell: the news that Michael Cohen, Trump’s longtime fixer, was prepared to tell special counsel Robert Mueller that Trump had advance knowledge of and approved the notorious Trump Tower meeting of June 2016, during which Donald Trump Jr., Jared Kushner, and Paul Manafort met with a Russian emissary to get dirt on Hillary Clinton as part of what they were told was a secret Russian plot to help Trump. This revelation seemed to be a possible game-changer—evidence that Trump did collude with a Kremlin operation and another indication that Trump’s denials of Russian intervention in the 2016 election were purposeful lies.

So what do you think of this Cohen story? I queried. “Zero,” Rohrabacher replied. I waited for more. “It’s a big zero,” he said. If Cohen’s account is accurate, I asked, doesn’t this show Trump colluded with a Putin-ordered operation to attack a US election? How is that nothing? “There’s not a person in this town who would not take a meeting to get material like that,” Rohrabacher shot back. He suggested he would.

Would you huddle with a mobster to get opposition research on an opponent? I inquired. They didn’t meet with a mobster, he responded. No, I noted, just a representative of a foreign adversary that was engaged in a clandestine operation to skew the election in Trump’s favor. “But did they know that?” Rohrabacher replied.

That was an interesting response. It has been widely reported, I reminded him, that the emails setting up the meeting—which were sent to Trump Jr., Kushner, and Manafort—stated that it was related to a covert Kremlin operation to assist Trump. Rohrabacher shrugged. He didn’t seem interested. That wasn’t so odd; Rohrabacher was practically the only Republican on Capitol Hill who defended Trump’s recent press conference with Putin. (Coincidentally or not, as the New York Times reported last year, “the FBI warned [Rohrabacher] in 2012 that Russia regarded him as an intelligence source worthy of a Kremlin code name.”)

The congressman and an aide then tried to point me in the direction of another story. They said Butina had appeared at an anti-Putin rally in 2011, as if that signaled she could not be a Moscow agent. How did they know this? It had been reported on a Belgian website…they thought.

Time to go, I said to myself. But first, I asked Rohrabacher about his reelection campaign. He had survived a tough Republican primary battle and was now facing Democrat Harley Rouda, a local real estate executive, and Rohrabacher’s pro-Moscow stance had become a campaign issue. I knew Rohrabacher, like any candidate, would predict victory. So I asked how much he expected to win by. “Five to ten percent,” he said. Really? I countered. That seemed optimistic. (A longtime incumbent, he did win by more than 16 points two years ago, yet Clinton captured the district by nearly 2 points that year.) Rohrabacher added that such a victory would only be possible if the national Republican Party rallied to his cause. It is, he conceded, a “competitive” contest.