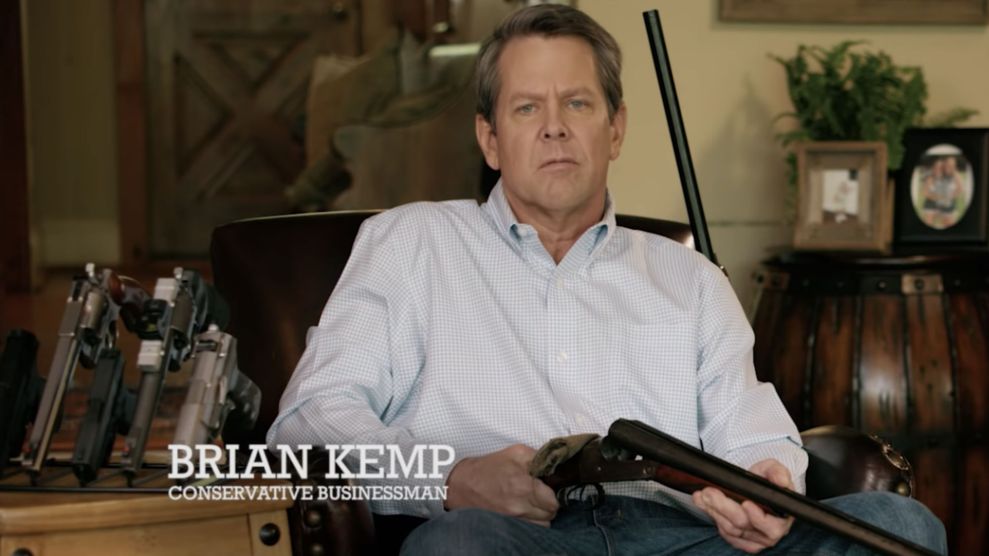 If you want to see just how politically polarized America is right now, take a look at Georgia. Stacey Abrams, a black woman who has earned endorsements from Sens. Bernie Sanders and Kamala Harris, won the Democratic primary for governor—and in November she’ll face whichever Republican wins a runoff for the GOP nomination Tuesday night, ending one of the wildest, most openly racist and xenophobic primaries in years.

Casey Cagle, the state’s lieutenant governor, has been running neck-and-neck with Brian Kemp, Georgia’s secretary of state, and the race has had all the makings of a modern political drama—or, if we’re being honest, a bonkers reality show. Here’s a snapshot of the runoff’s wildest moments:

The most important things to know about Brian Kemp, according to Brian Kemp: (1) He loves the Second Amendment and he has lots of guns. (2) He hates immigrants and is not above using his own pickup truck to round them up for illegally crossing the border.

Also, (3): He’s a Good Dad, which is to say, a Tough Dad, who forces his daughter’s suitors to recite his policy platforms at gunpoint and on camera.

Not to be outdone, Cagle has unleashed some ridiculous ads of his own, like this one, which pokes fun at Kemp’s ads and not-so-slyly takes a shot at InKEMPetence—get it?

Yes, tapes! Secret recordings, to be exact. Throughout the race, Cagle has been haunted by the slow and steady leak of secretly recorded audio. Are they sex tapes? Definitely not. Because this is Trump’s America, and the only thing more damning than a sex tape is one in which you confess sympathy for the poor, as Cagle did in this one.

“I literally have a goal—a personal goal. I want to cut poverty in half. And I believe that I can do it,” Cagle says in one that was released by the Atlanta Journal-Constitution a week before the runoff election.

When asked about the recording by the Atlanta Journal-Constitution, Brian Goodgame, an aide for one of Cagle’s Republican rivals, said it proves that Cagle is not in line with contemporary Republican dogma. Real conservatives, he emailed a reporter, “know that churches and private charities do a far better job in helping the impoverished reach prosperity than big government welfare programs.”

Other tapes capture Cagle, who has an A+ rating from the National Rifle Association, leveling mild criticism against gun owners and seeming annoyed that the Republican race for governor seems to have devolved into which candidate owns the biggest truck—which led the Times Free Press to ask if Cagle’s trustworthy.

And the other tapes.

Yes, those. Sorta. One week before the runoff, Robert Farturechi, a reporter at ProPublica, tweeted about watching a 2016 presidential debate with Kemp. At one point, the Georgia secretary of state, apparently not realizing that there was a reporter in the room, joked, “Trump should have gone over there and groped her!”

I watched the post-Access Hollywood presidential debate with Brian Kemp at a Kansas hunting lodge. (He didn't realize I was a reporter.) He joked "Trump should have gone over there and groped her!" to a room of corporate donors and other secretaries of state. https://t.co/yKA0WFPBz7

Kemp vehemently denies the account, but that hasn’t stopped Cagle from seizing on the story and calling it inexcusable. “Beyond the fact that these comments are incredibly offensive,” Cagle tweeted, “Brian has staked his campaign on the fact that he does the right thing ‘when no one is looking.'”

Inexcusable statement. These disgusting remarks are far below the standard we should set. Beyond the fact that these comments are incredibly offensive, Brian has staked his campaign on the fact that he does the right thing “when no one is looking.” https://t.co/hsd2TnVE1x

And, of course, a Trump endorsement!

Donald Trump recently waded into the race and offered an 11th hour endorsement of Kemp less than a week before voters head to the polls. Even Kemp seemed surprised by the move, according to the Atlanta Journal-Constitution:

The president’s tweet Wednesday afternoon came as the secretary of state was in the middle of a press conference with Clay Tippins, the former GOP candidate who stirred up the race with his secret recording of the lieutenant governor.

Kemp said when he looked up to see ecstatic aides eyeing their cellphones and “jumping up and down,” he knew something was up.

But the endorsement makes sense—Kemp was ahead in the polls as the race neared the finish line and the president loves a winner. But Kemp also may have benefited from having strong allies in the right places. Former Georgia Governor Sonny Perdue, who’s now agriculture secretary in Washington, made Kemp secretary of state in 2010, and Senator David Perdue, the agriculture secretary’s cousin, has been an outspoken ally of Trump.

But, really, maybe Kemp shouldn’t have been that excited. As my colleague Tim Murphy points out, all of Trump’s Twitter endorsements are essentially the exact same—including the one for Kemp.