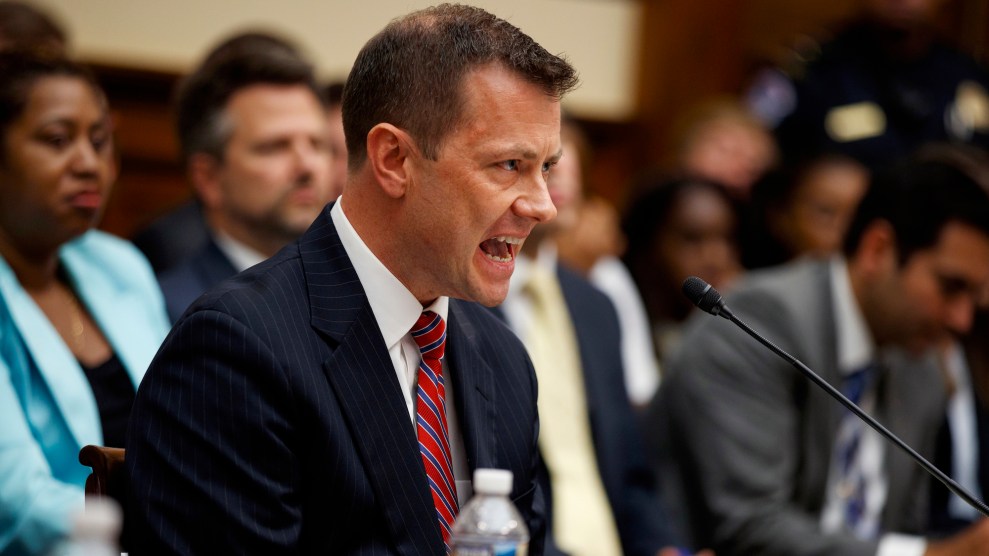 Republicans finally got their chance Thursday to publicly question senior FBI agent Peter Strzok about his politically charged text messages with Lisa Page, a former FBI attorney he was personally involved with. It did not go exactly as the lawmakers hoped.

If the House GOP’s goal in grilling Strzok at length was to distract from the ongoing investigation of Trump campaign ties to Russia and the president’s conspicuously pro-Kremlin behavior—including his recent suggestions that the US might withdraw from NATO—then Thursday’s hearing was a success. But the showdown also cost Republicans: They were forced to let Strzok openly defend himself for the first time. And their own eagerness to continue a purely partisan attack on special counsel Robert Mueller’s investigation was on glaring display.

At the joint hearing of the House Judiciary and the Oversight and Government Reform committees, GOP members mostly spent their time leveling accusations of extreme bias against Strzok, who played a key role in the bureau’s investigations into Hillary Clinton’s use of a email and allegations that the Trump campaign conspired with Russia. They read aloud Strzok’s text messages to Page, and forced him to read some aloud too. But those texts have long been public and widely discussed in the media. What was new Wednesday was that Strzok had the chance to explain them, and he made the most of it.

Strzok was able to explain why he sent the famous text in which he told Page that “we’ll stop” Trump from becoming president. He said the text was a response to events that included “Trump insulting the immigrant family of a fallen war hero, and my presumption based on that horrible, disgusting behavior that the American people would not elect someone demonstrating that behavior to be president of the United States.” (Strzok was referring to Trump’s attacks on Khizr Khan, who famously criticized Trump at the Democratic National Convention in 2016; his son, Captain Humayun Khan, was killed in Iraq in 2004.)

Strzok continued: “I can assure you, Mr. Chairman, that at no time in any of these texts did those personal beliefs ever enter into the realm of any action I took. He added that the committee did not need to rely on his word, due the multiple layers agents involved in investigative decisions. “They would not tolerate any improper behavior in me any more than I would tolerate it in them,” he said. “That is who we are as the FBI.”

Strozk also told the panels that the “we” he’d referred to in the text about “stopping” Trump was not the FBI, as Republicans have asserted, but American voters. His forceful remarks did not appease his critics, but they served to deflate the anti-Trump partisan narrative about him that his critics constructed over months while he remained silent. His statement in defense of himself and the FBI drew applause from some hearing attendees.

Strzok had used his opening statement at the hearing to make an obvious but overlooked point: If he wanted to “stop” Trump’s election, he could have leaked information on the Trump campaign’s extensive contacts with Russia. But “the thought of exposing that information never crossed my mind,” Strzok said. That made for an interesting contrast: As Democratic lawmakers noted, senior FBI officials in 2016 believed that agents in the FBI’s New York bureau were leaking information intended to damage Hillary Clinton’s campaign. The Justice Department’s Inspector General concluded this year that concerns about leaks from that FBI field office influenced former FBI Director James Comey’s  possibly fateful decision to make public that the FBI had reopened its investigation of Hillary Clinton’s emails just ahead of Election Day.

Strzok, citing advice from FBI lawyers, declined to detail his work on the Trump-Russia investigation. But he managed to highlight the significance of the Trump campaign’s alleged actions. “If there were people within the campaign who were colluding or working with the government of Russia, then there is very little that is more important for … the FBI [to] get to the bottom of,” he said. Strozk also expressed concern that Russia succeeded in influencing the outcome of the 2016 election by  “putting their finger on the scale” of American public opinion.

Democrats used the hearing to highlight Republican efforts to hinder the investigation into Trump. When Republicans threatened to hold Strzok in contempt of Congress for failing to answer some questions about the Russia probe, Democrats responded by forcing a joint committee vote aimed at subpoenaing former White House advisor Steve Bannon, who earlier this year refused to comply with a subpoena from the House Intelligence Committee. Republicans voted down that effort. Notably, Rep. Trey Gowdy (R-SC) appeared less than eager on this front: He said “pass” during the roll call vote.

Democrats also used the hearing to point out that House Judiciary Committee Chairman Robert Goodlatte and Gowdy previously justified their refusal to look into Trump’s ties to Russia by asserting they wanted to avoid interfering with Mueller’s investigation.

Rep. Jerry Nadler (D-NY), the ranking member of the Judiciary Committee, noted that Goodlatte said last year that “until Mr. Mueller’s investigation is complete, it is redundant for the House of Representatives to engage in fact-gathering on many of the same issues.” Goodlatte has also claimed that his committee “would never intrude on an active criminal investigation,” Nadler pointed out. But Nadler said that was belied by the fact that the Republicans, during an 11-hour private interview earlier in the week, asked Strzok more than 200 questions about the special counsel’s investigation, including about the FBI’s use of confidential sources.

“Are we no longer going to wait until special counsel Mueller concludes his work, Mr. Chairman?” Nadler asked, adding: “Or perhaps the rules of this joint investigation, such as they are, operate differently now that we are approaching the midterm elections and special counsel Mueller is closing in on the President’s close associates.”