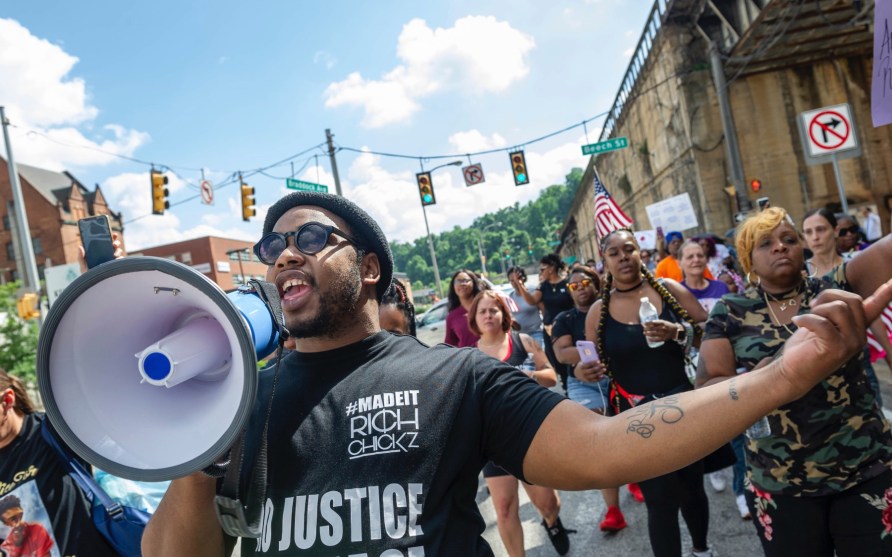 A protest over the police killing of Antwon Rose in East Pittsburgh, Pennsylvania on June 28, 2018.Michael M. Santiago/Pittsburgh Post-Gazette/AP

A civil lawsuit filed Monday against Michael Rosfeld—the East Pittsburgh police officer charged last week in the fatal shooting of unarmed 17-year-old Antwon Rose—accuses him of violating the civil rights of three men arrested during Rosefeld’s prior stint as a cop at the University of Pittsburgh.

On December 9, 2017, Rosfeld responded to a fellow officer’s call for assistance at the Garage Door Saloon, a bar near campus where Rosfeld ended up arresting the men (one black, two white) on charges including assault and trespassing. (A fourth ran away and was not arrested.) In his arrest reports, Rosfeld parroted the bar owner’s account: He wrote that the men, who were at the bar celebrating one of their birthdays, were thrown out after picking a fight with other patrons. They had to be physically removed, the owner claimed, and one of them kicked and shattered a glass door in retaliation. The men, Rosfeld also wrote, assaulted an employee who tried to get them to leave. He claimed he watched surveillance footage from the bar’s security cameras that verified the owner’s story.

The lawsuit filed on Monday notes that the Allegheny County DA’s Office dismissed the charges against the men after determining that the surveillance footage “did not support” and, in fact, “contradicted,” Rosfeld’s reports. The owner had ejected the friends unprovoked, the suit claims, and the second officer on the scene was there only because one of the three men flagged him down for assistance.

According to the suit, Rosfeld “failed to review exculpatory evidence” that would have proved the men’s innocence, and he arrested the men at the behest of the owner, with whom he had a prior relationship. The suit also accuses Rosfeld of battery, claiming he “immediately” resorted to force upon arrival at the bar: “As a result of Officer Rosfeld’s willful police misconduct,” the plaintiffs “were deprived of their civil rights and were unjustly detained and incarcerated.” The men spent a night in jail and had to hire separate lawyers to help clear their records of Rosfeld’s drummed up charges, a lawyer representing two of the men said at a press conference on Monday.

“It makes me sick that he was able to still be a cop after how they treated us.”

Media reports indicated that Rosfeld left the campus police department after prosecutors found discrepancies between his police reports and the evidence they reviewed. The civil suit—which also names the University of Pittsburgh, police chief James Loftus, the Garage Door Saloon, the bar owner, and the bar’s parent company—asserts that the bar incident led to Rosfeld’s suspension and ultimate firing. It further accuses the officer of false arrest, false imprisonment, and malicious prosecution. (A university spokesman would not comment on pending litigation, and attempts to reach the other parties were unsuccessful.)

Rosfeld was hired by the East Pittsburgh Police in May. Last Monday, he was charged with criminal homicide in the killing of Antwon Rose, a charge that enables a jury to consider anything from involuntary manslaughter to first-degree murder. Lee Merritt, an attorney for Rose’s family, told Mother Jones he confirmed some of the civil suit’s allegations while looking into Rosfeld’s background.

Merritt points to the bar incident as evidence that Rosfeld has a history of questionable police work. Rosfeld should never have been re-hired, he says. “It makes me sick that he was able to still be a cop after how they treated us,” Timothy Riley, one of the men arrested in December, told the Pittsburgh Post-Gazette.

Robert Pierce, the lawyer representing Riley in the civil suit, says numerous others have contacted him to talk about charges filed against them and later dismissed after Rosfeld had arrested them. Pierce’s office is in the process of verifying the stories, he says.

According to the criminal complaint filed last week, Rosfeld changed his account of his encounter with Rose three times: First he told investigators Rose had “turned his hand toward” him, holding something he thought was a gun, as the teen fled from a traffic stop. Later, the officer said he did not see a gun. Pressed about the discrepancy, according to the complaint, Rosfeld said he saw something in Rose’s hand but wasn’t sure what it was. “In addition,” investigators wrote, the officer said he wasn’t certain whether Rose had been pointing anything at him at the time he fired his weapon. In fact, Rose was unarmed, the complaint says. Three bullets struck him from behind.

Read the civil lawsuit filed against Rosfeld below.