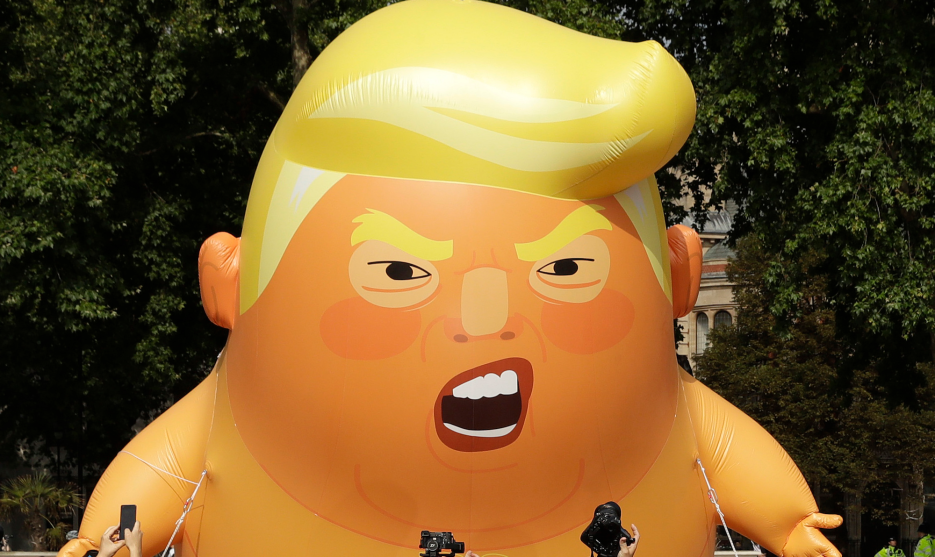 Tens of thousands of people marched across the streets of London Friday to protest President Donald Trump’s first official visit to the United Kingdom, with many demonstrators carrying signs condemning Trump’s policies both at home and abroad. Others mocked the president’s intelligence.

The massive display came as Trump worked to clean up an explosive interview with a British tabloid this week during which he criticized British Prime Minister Theresa May’s approach to leaving the European Union. The interview was published Thursday, just hours after May had hosted a black-tie dinner in honor of Trump’ highly contentious visit.

Earlier in the week, Trump repeatedly threw the NATO summit in Brussels into chaos with divisive remarks toward European allies and demands that they increase their defense spending to the alliance. As the summit concluded and Trump prepared to make his way to the United Kingdom, the president dismissed the upcoming protests planned for London. “I think they really like me in the UK,” he told reporters.

The scene on Friday, of course, did not affirm Trump’s thinking:

Huge #TrumpProtest in Portland Place. Can’t see how it will move south down Regent St as thousands are still heading north from Oxford Circus, being corralled round onto Mortimer St then Gt Portland St to join rear.. which is now up near the park. pic.twitter.com/FIah4lToX2

There are some great banners on the Trump protest march today, courtesy of our reporter on the spot John Dunne pic.twitter.com/1BjH8eVVtp

Some of the signs from George Square Trump Protest. pic.twitter.com/2Tp6UqKXMV

Aerial view shows mass of protesters gathered in London demonstrating against Pres. Trump's UK visit, which has included a joint presser with Prime Minister May and a meeting with Queen Elizabeth. https://t.co/lcmV1MWLoy pic.twitter.com/3xQvorlPKB