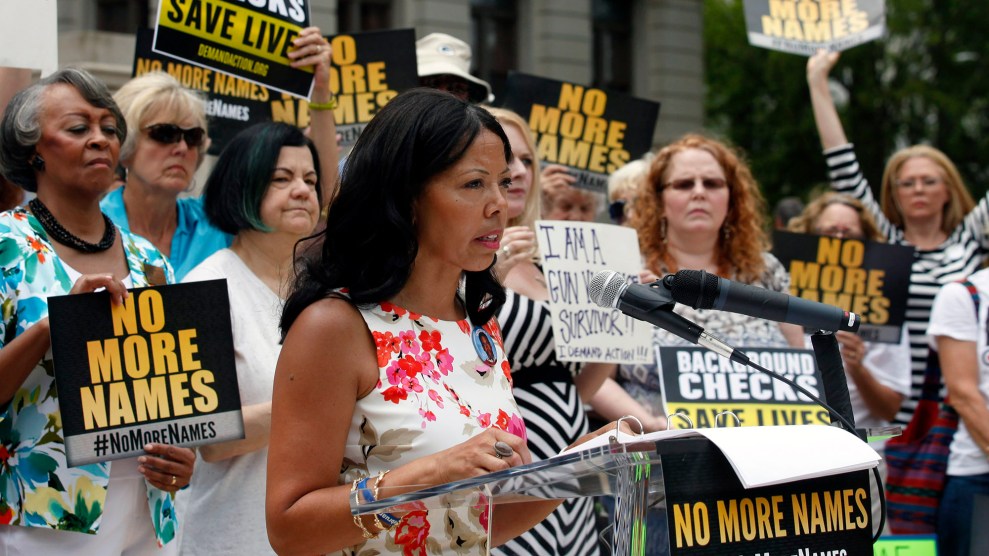 By nearly every measure, Lucy McBath wasn’t supposed to get this far in the Democratic race for Congress in Georgia’s 6th Congressional District. She’s a mom who became a national advocate against gun violence after her only son, Jordan Davis, was shot and killed by a white man at a Florida gas station. She spent three decades as a flight attendant for Delta. And she had never run for public office before last year, when she jumped into the race for Georgia’s Statehouse. Then she decided to switch things up and launched an even more ambitious run for the US Congress. In May, she won 36 percent of the vote in a crowded Democratic primary—enough for her to advance to a runoff. On Tuesday, she defeated Kevin Abel, a small businessman who immigrated from South Africa.

Along the way, McBath picked up a slew of prominent endorsements, including one last week from Rep. John Lewis (D), the civil rights leader who has represented the neighboring 5th District for the past three decades. Politically, the endorsement was a big deal because of Lewis’ outsize moral significance in the Democratic Party. But it also resonated personally with McBath. “He is such an icon and probably someone I have admired all of my life with a civil rights background,” McBath told Mother Jones. “So I’m very honored and humbled to have that endorsement.”

McBath’s run in the 6th District came roughly a year after another historic race. Jon Ossoff, a young Democrat, narrowly lost a special election in 2017 to Rep. Karen Handel in what was once considered a safe district for Republicans. Now, McBath will face off against Handel in November’s general election.

McBath came to national prominence after her son’s murder in 2012. The shooting became a flashpoint for advocates working to end gun violence and police and vigilante violence against black communities. McBath became one of the most recognizable advocates, testifying before Congress, sharing her story in two documentary films, and eventually stumping for Hillary Clinton during the 2016 presidential campaign.

When I profiled McBath at the start of her state House campaign—before she’d decided to run for Congress instead—she said that her goal was to find a way to use her tragic story to help inspire others to act. “The work was calling me,” she said. “I wanted to be speaking about violence prevention. I wanted to be challenging our legislators and our civil leaders.”

I am incredibly honored to have the endorsement of one of my personal heroes, @repjohnlewis. I cannot wait to work side-by-side with my friend Representative Lewis to create "good trouble" for the people of our great state and country. #GA06 #gapol pic.twitter.com/mHGsuB8pAl

Instead of simply challenging legislators, she decided she wanted to become one.

“At the forefront of my mind has always been, ‘I just want to make a difference,'” McBath said recently. Part of making that difference is upending the conventional wisdom of which voters matter in Georgia. She hoped to shape “that narrative that this is a diverse and inclusive district and that the person who represents this district should have the heart to serve the people in this district.”

It’s path that’s becoming more common for people in the gun safety movement, even in traditionally red, gun-happy states like Georgia. Shannon Watts, the co-founder of Moms Demand Action, a gun violence prevention group started in the aftermath of the 2012 Sandy Hook massacre, has been one of McBath’s closest allies.

“Our volunteers go to statehouses to stop bad bills or support good bills, and what they realize very quickly is that state representatives aren’t rocket scientists,” Watts told me in May. “There’s no secret sauce to doing this. It just takes being intelligent and strategic.”

The two have worked together since 2013, traveling the country to speak at town halls and statehouses and to members of Congress about the need for stronger gun laws. Moms Demand Action has trained dozens of advocates to run for office, coaching them in the fundamentals of public speaking and fundraising. Gun control activists have also pumped plenty of money in McBath’s direction: The Everytown for Gun Safety Action group—Moms Demand Action merged with billionaire Michael Bloomberg’s Everytown for Gun Safety in 2013—spent more than $500,000 on ads for McBath during the primary.

“I’m not someone who’s spent my entire life trying to figure out how to be a politician,” McBath says. “But an ordinary person like myself, coming from very extraordinary circumstances and tragedies in my life, [gives] me a vision that’s based on my experiences.”

In reflecting on her experience running for office, McBath notes the power that has come from seeing her individual story as part of a much broader context. “When you’re just one person, you have this idea of the kind of world that you want to live in, and what you want for the people that live in that world with you,” she says. “And to have others come along the way and help build that vision and sow some good seed into that vision that’s inclusive and diverse, [that] has probably been the most amazing part of running for this seat.”