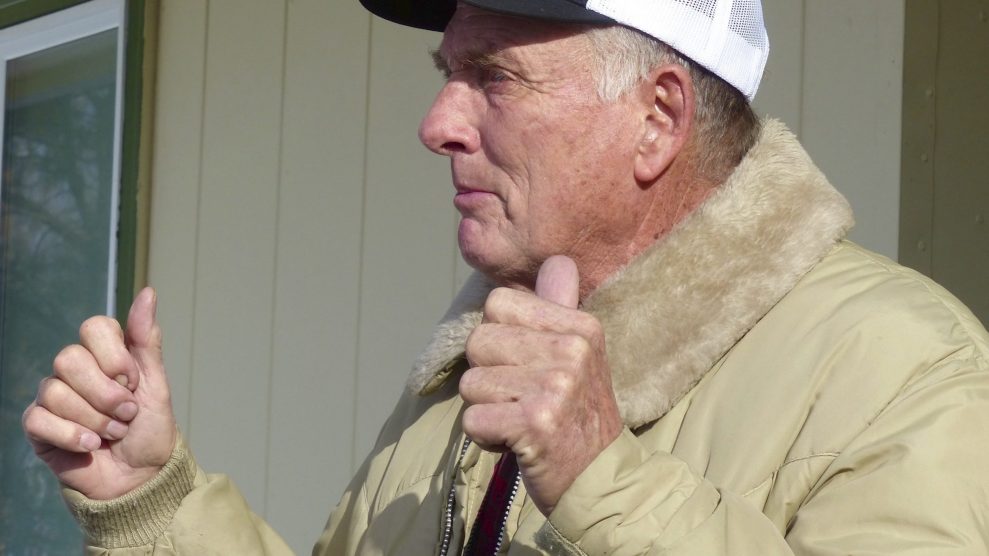 In this Jan. 2, 2016, file photo, rancher Dwight Hammond Jr. greets protesters outside his home in Burns, Ore. President Donald Trump has pardoned Dwight and Steven Hammond, two ranchers whose case sparked the armed occupation of a national wildlife refuge in Oregon. The Hammonds were convicted in 2012 of intentionally and maliciously setting fires on public lands. Les Zaitz/The Oregonian via AP

Last year, Western land activists and other conservatives had been lobbying President Donald Trump to pardon rancher Cliven Bundy, who in 2014 had engaged in an armed standoff with federal officials trying to confiscate his cattle that were trespassing on public property. But earlier this year, a federal judge dropped all the charges against Bundy thanks to misconduct by prosecutors, and there was no longer any need for Trump to pardon him. So Trump last week did the next best thing: He pardoned Oregon rancher Dwight Hammond Jr. and his son Steven, whose 2012 convictions for arson on federal land had inspired Bundy’s son Ammon to lead the armed takeover of the Malheur National Wildlife Refuge in Oregon in 2016.

“I have had the opportunity to have a lot of time resting and relaxing while I’m being sheltered and fed to realize that a lot of my life has been misdirected,” said Hammond.

The takeover ultimately resulted in the death of one of the occupiers, LaVoy Finicum, who was shot by an FBI agent while fleeing the site, and it turned the Hammonds into a cause célèbre for activists in the West who believe federal land should be returned to the states. The Hammonds had battled the feds over a variety of land infractions for two decades before they were finally prosecuted for setting a fire that spread to federal land.

The Hammonds negotiated a short prison term for the arson charges and served just a few months. But in 2015, prosecutors succeeded in convincing a judge that the original sentence had failed to follow federal guidelines, and they were resentenced to five-year terms, a decision that helped set off the wildlife refuge takeover. The Bundys pressured the Hammonds not to report to prison, but they ignored the requests and turned themselves in as required.

The Hammonds’ pardon was procured, in part, with help from Forrest Lucas, an Indiana oil magnate with ties to Vice President Mike Pence, who’d lobbied for clemency. In order to capitalize on the national attention generated by the Bundys, Lucas, along with his nonprofit group Protect the Harvest, has sponsored “range rights” conferences supporting opposition to federal land management policies.

But if Lucas and other supporters thought the Hammonds were going to come out of prison to take to the range rights lecture circuit along with the Bundys, they may be disappointed. In his first interview after coming out of prison, Dwight Hammond put some distance between himself and the Bundys and their followers. He told the Oregonian‘s Maxine Bernstein that he had opposed the wildlife refuge takeover, and that he’d “tried to do the right thing.”

Hammond said that his time in prison has convinced him that all those years of battling the feds over grazing rights and land management were misplaced. Now, the 76-year-old rancher intends to start lobbying on what he thinks is the real problem in America: the disappearance of God from the public schools.

“I have had the opportunity to have a lot of time resting and relaxing while I’m being sheltered and fed to realize that a lot of my life has been misdirected,” he told Bernstein.

The Supreme Court, invoking the Constitution’s Establishment Clause requiring the separation of church and state, has put up strict barriers between prayers in public school and the teaching of religion. Nonetheless, Hammond told Bernstein, “We don’t stand a snowball’s chance on a slow roll through hell of getting out of this situation until we are willing to let God lead us.”