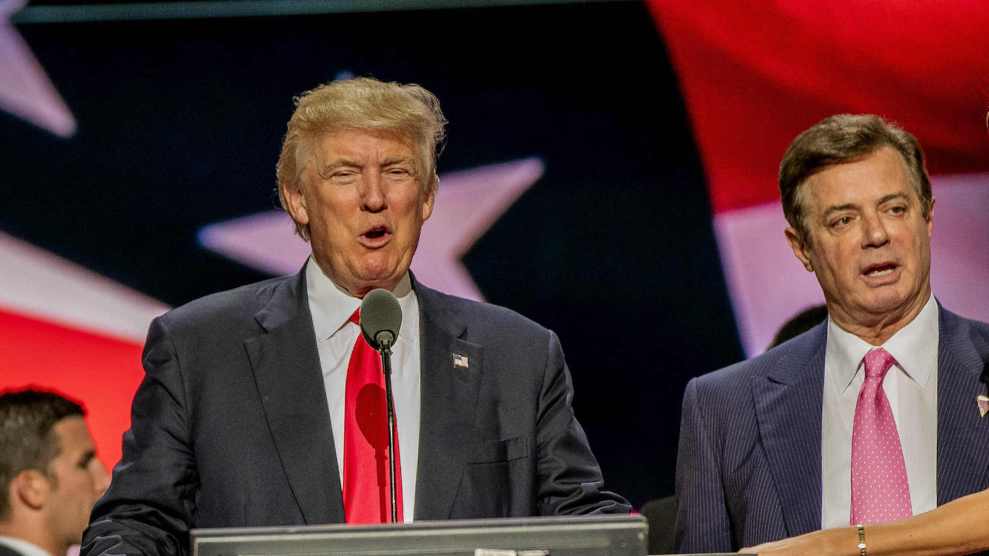 Paul Manafort is set to go on trial Tuesday, but it won’t be for conspiring with Russians to help elect President Donald Trump. In a hearing last week in US District Court in Alexandria, Virginia, Greg Andres, a top prosecutor under Special Counsel Robert Mueller, said that prosecutors “don’t intend to mention alleged collusion with the Russians” during the trial of Donald Trump’s former campaign chairman on tax evasion and bank fraud charges.

Nor have prosecutors accused Manafort of conspiring with Moscow as part of a separate case in Washington, DC, scheduled to go to trial in September, in which Manafort faces charges that include money laundering, fraud, illegal lobbying, and obstruction of justice.

Trump and some of his defenders contend that Mueller’s prosecution of Manafort on charges unrelated to collaboration with Russia during the 2016 election means such evidence does not exist. But that is a flawed assumption. The special counsel has constructed cases that offer the best chance of convicting Manafort, building on investigations that began years before the 2016 race. If Manafort is convicted, prosecutors may hope to use what could essentially amount to a life sentence to push him to cooperate with their broader investigation into Russian interference in the 2016 campaign.

Mueller also has reason to avoid charging Manafort now with crimes that might involve conspiracy with Russians. (Though “collusion” is not a crime, prosecutors could bring conspiracy charges against Americans involved in disseminating emails or data stolen from Democrats.) Doing so would require Mueller to publicly share evidence for those charges, which would mean exposing information important to his ongoing investigation.

Yet as they lay out a case against Manafort, prosecutors have released tidbits that seem to hint at Manafort coordinating with Russia. These details, combined with media reports, bolster a case—albeit a circumstantial one—that Manafort may have conspired with Russia in 2016. Here’s what we know:

Manafort was uniquely positioned to collude. A longtime lobbyist and Republican operative, his key clients in recent years have included Russian aluminum magnate Oleg Deripaska, who is a close ally of Russian President Vladimir Putin, and Ukraine’s former pro-Russian President Viktor Yanukovych. In the spring of 2016, Russians began contacting the Trump campaign through multiple channels, in at least two cases offering damaging information on Hillary Clinton. Manafort, who joined the campaign in March, had the contacts that gave him the means to reach out to Moscow.

Mueller has reason to avoid charging Manafort now with crimes that might involve conspiracy with Russians. Doing so would require him to publicly share evidence for those charges, which would mean exposing information important to his ongoing investigation.

Did he? CNN reported last year that US intelligence agencies monitored communications in which Russian operatives described conversations in which Manafort was “encouraging help from the Russians” in obtaining “information that could damage Hillary Clinton’s election prospects.” One of the memos of raw intelligence that former British intelligence officer Christopher Steele provided to the FBI cited claims that Manafort managed the US end of a conspiracy of cooperation between the Trump campaign and Russian leaders.

Prosecutors have alleged in court filings that Manafort’s longtime business associate in Ukraine, Konstantin Kilimnik, has ties to Russian intelligence that were active in 2016. Prosecutors have also alleged that Manafort’s longtime businessman partner Rick Gates, who has pleaded guilty and is cooperating with Mueller’s probe, told an associate that Kilimnik “was a former Russian Intelligence Officer with GRU.” Mueller and US intelligence agencies have accused the GRU, Russia’s military intelligence agency, of hacking the Democratic National Committee, Hillary Clinton’s campaign chairman, and other Democrats as part of an effort to help Trump win the election. (Kilimnik denies having ties to Russian intelligence.)

Kilimnik and Manafort exchanged emails during the summer of 2016, and they met in Manhattan on August 2 of that year at the Grand Havana Club, a Manhattan cigar club, emails reported by the Atlantic show. The purpose of the sitdown, according to emails Kilimnik sent Manafort, was for Kilimnik to convey “several important messages” from a person who is referenced cryptically in their correspondence, but who seems to be Deripaska. “It has to do about the future of his country, and is quite interesting,” Kilimnik wrote. Kilimnik told the Washington Post that their meeting concerned “unpaid bills” and “current news” but maintained they did not discuss the presidential campaign.

A few days after that meeting, Deripaska held a secretive meeting aboard his yacht with a top Russian foreign policy official, Deputy Prime Minister Sergey Prikhodko. The meeting was publicized by a Russian opposition activist who charged that Deripaska passed information to the Kremlin through Prikhodko. The meeting was documented on social media by Deripaska’s alleged mistress, an escort named Nastya Rybka. She is currently jailed in Thailand for attending an unlicensed “sex seminar” and has sought asylum from the United States in exchange for sharing what she asserts is evidence of collusion between Russia and Trump’s campaign. Deripaska, whose representatives did not respond to inquiries from Mother Jones this week, denies Rybka’s claims, and has said he he did not communicate with Manafort in 2016. Yet Kilimnik, who had connections to Deripaska, may have offered Manafort a means to communicate with both Russian intelligence and the Kremlin.

Manafort was ousted from the Trump campaign on August 19, 2016, but he reportedly continued to advise Trump informally through the election and into 2017. In addition, Gates, Manafort’s righthand man, not only retained a senior campaign position, but also was in contact with Kilimnik in the fall of 2016, according to a February 20 court filing by Mueller’s team.

There is also reason to believe that Manafort may have had secret communications related to Russia that have not been disclosed publicly. In a June hearing, prosecutors flagged Manafort’s use of encrypted applications, such as WhatsApp, and a technique Andres called “foldering.” That entails giving multiple people access to a single email account so they can communicate through draft emails. Since the messages are not sent, they can’t be intercepted and are easily deleted. Andres described the tactic as evidence of Manafort’s deceitfulness while successfully arguing for revocation of Manafort’s bond. But the prosecutor did not say who Manafort allegedly used the draft emails to communicate with, when Manafort would have done this, or why.

Federal filings connected to a search of Manafort’s property last year have also revealed that he may have had a major motive to help Russia: He allegedly owed millions to Deripaska. Manafort and his wife owed the oligarch $10 million for a loan Deripaska made to a company they established, according to an FBI agent’s July 2017 affidavit. That loan appears to be separate from an additional debt of at least $7.8 million Manafort reportedly owed Deripaska at the end of 2015.

In April, in announcing sanctions against Deripaska, the Treasury Department’s Office of Foreign Assets Control noted the oligarch is suspected of “threatening the lives of business rivals…taking part in extortion and racketeering”; maintaining “links to a Russian organized crime group”; and ordering “the murder of a businessman.” Deripaska has long contested these allegations.

Manafort seems to have been worried about Deripaska. In an April 2016 email to Kilimnik that was first reported by the Washington Post, Manafort, citing news coverage that he had joined the Trump campaign, asked: “How do we use to get whole?” A Manafort spokesman has claimed, without evidence, that this referenced money Deripaska owed Manafort. But a more plausible read is that Manafort was motivated to placate Deripaska.

Manafort knew helping Russian interests was valuable to the oligarch. In a 2005 pitch that helped him land a $10 million contract from Deripaska, Manafort offered advocacy that he said would “greatly benefit the Putin Government,” the Associated Press reported last year. (Deripaska unsuccessfully sued the AP over the report, alleging in part that it falsely implied that he paid Manafort for work aimed at advancing the goals of the Russian government.) In sanctioning Deripaska, the Treasury Department also noted the oligarch has said he “does not separate himself from the Russian state.” Manafort’s July 2016 offer to provide Deripaska with a private briefing on the 2016 campaign suggests that Manafort believed Deripaska valued political intelligence. And a person who seems to be Deripaska, according to Kilimnik’s cryptic email arranging their August 2016 meeting, sought help regarding the “future of his country.”

Manafort was reportedly in dire financial straights when he joined the Trump campaign, with unpaid credit card bills and an expensive lifestyle that he lacked the cash flow to support. He nevertheless took a job with Trump for free. This has prompted speculation that he hoped to leverage the work to win larger payoffs after the election.

There is no proof Manafort colluded with Russia. But given what we know about him, a good question might be: Why wouldn’t he?

There’s more that connects Manafort to possible Russian collusion. He attended the infamous June 2016 Trump Tower meeting where a Russian emissary was supposed to supply dirt on Hillary Clinton provided by the Russian government. The meeting recently gained new attention based on a reported claim by President Trump’s former personal lawyer, Michael Cohen, that Trump knew of the meeting beforehand. Manafort also knew of efforts by a Trump campaign aide, George Papadopolous, to arrange contacts between the campaign and the Kremlin, seemingly okaying the outreach in an email that urged using “someone low level in the campaign” to handle contacts with Moscow.

Prosecutors have accused Manafort of committing crime upon crime. They allege that he evaded taxes by steering secret Ukrainian payments through offshore accounts, some of which he used to buy real estate, and then lied to banks to improve his interest rates when he borrowed against the properties. Prosecutors say Manafort lied to his own accountants and lawyers, as well as to the Justice Department.

Since his initial indictment last fall, prosecutors have repeatedly accused Manafort of scheming to undermine their efforts. Last fall, they accused him of defying a gag order by ghostwriting an op-ed regarding his political work for Ukraine. US District Court Judge Amy Berman Jackson, who is overseeing the DC case, last month revoked Manafort’s bail based on evidence that Manafort, with help from Kilimnik, tried to coach witnesses in his case to align their accounts of pro-Ukrainian lobbying efforts with his. Prosecutors paint him as an incorrigible schemer who couldn’t stop scamming and breaking rules even when he knew they were watching.

Combine that picture with the political and financial incentives that Manafort had to help Russia help Trump. He had the means, motive, and opportunity to collude. Manafort has pleaded not guilty and disputes the government’s charges. A Manafort spokesman declined to comment for this article but has previously denied Manafort colluded with Russia. There is no proof Manafort did. But given what we know about him, a good question might be: Why wouldn’t he?