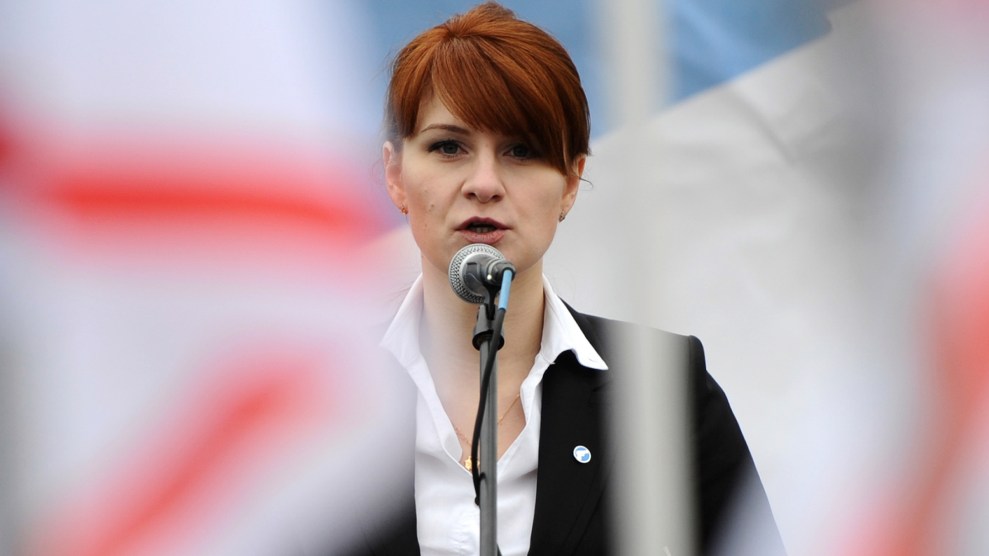 Maria Butina speaks at a guns rights rally in Moscow on April 21, 2013. AP

A group of Democratic senators are demanding answers from members of a National Rifle Association-linked delegation that traveled to Russia in 2015 with accused Russian spy Maria Butina. While in Russia, the group, which included former Milwaukee County Sheriff David Clarke and top NRA donors and executives, met with Dmitry Rogozin, the deputy prime minister, who had been sanctioned by the Obama administration after Russia’s invasion of Crimea. The delegation also visited the Orsis gun factory, which manufactures a high-end sniper rifle used by Russian troops that the Pentagon has expressed concerns about.

In letters sent to members of the delegation, the senators—Ron Wyden, Elizabeth Warren, Sheldon Whitehouse, and Richard Blumenthal—ask them to explain what they know about how the trip was funded, the extent that the NRA was involved with organizing the trip, and whether the gun group provided any financial backing for it. Butina, who was arrested last week and charged with operating as an unregistered foreign agent, had claimed that a Russian gun rights organization she ran, the Right to Bear Arms, had covered some of the costs for the trip, and on an ethics disclosure Clarke reported accepting $6,000 in meals, lodging, and travel from Butina’s group for the trip. (Clarke now works with a pro-Trump super-PAC.) Butina, according to federal prosecutors, has worked closely with Alexander Torshin, a Russian politician and Putin ally, as part of a “years-long conspiracy to work covertly in the United States as an undeclared agent of the Russian Federation in order to advance the interest of her home country.”

The letters also ask members of the delegation to detail the extent of their interactions with Butina, Torshin, and Rogozin—and anyone who might have been on the US sanctions list—before and during the trip. The letter was sent to Clarke; David Keene, a former NRA president, who had helped Butina’s Russian group; Pete Brownell, who at the time was an NRA vice president and who recently ended a term as the president; two top NRA donors; and the president of the Outdoor Channel television network.

Wyden has sent previous letters to the NRA regarding the gun rights group’s connections with Russia during the 2016 election, focusing on whether the group received any financial support from the Russian government. The NRA has refused to answer his queries.