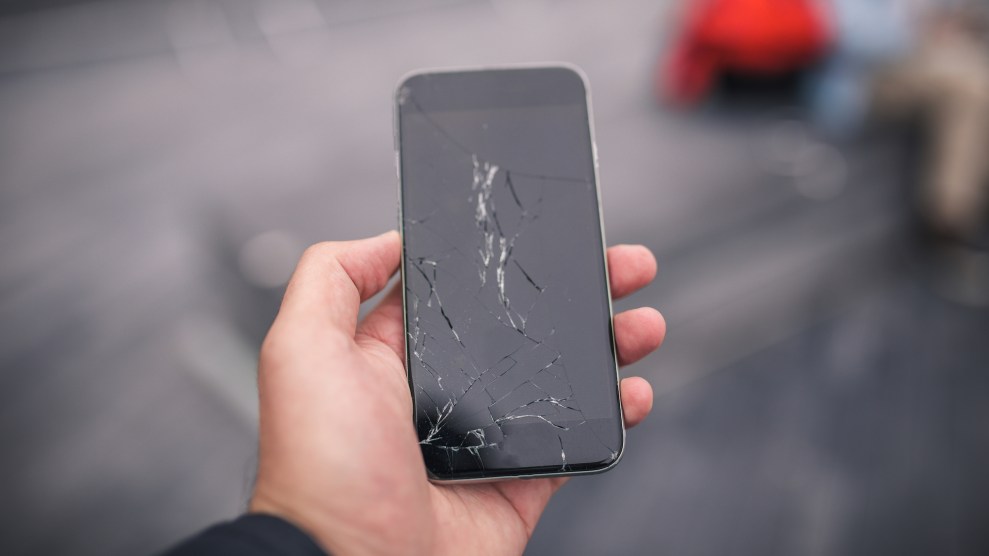 House of Ruth, a social services center for women and their children in Washington, DC, has served thousands of women since it was founded in 1976. And while the reasons why women need its services, namely homelessness and domestic abuse, haven’t changed much in the past 42 years, the needs of those women have as technology has changed.

“It’s just impossible today to operate without some sort of cellular device,” says Sandra Jackson, executive director of House of Ruth. “I just can’t say enough about it. It’s key.”

While organizations like House of Ruth used to see cases of abusers literally ripping phones out of the wall, now they’re more likely to work with women whose abusive partner either destroyed their cellphone or otherwise financially damaged the victim, such as ruining their credit score, so that they’re unable to buy a new phone. In order to meet the needs of these women, organizations like House of Ruth rely on donated phones, their own funds, and maybe most essentially, a federal program founded in 1985, the Lifeline Assistance program.

But now, the Republican-dominated Federal Communications Commission is seeking to make heavy cuts to the program and put domestic violence victims—as well as the homeless, veterans, and citizens of Puerto Rico—all at increased risk.

“If Lifeline has devastating cuts, it will absolutely impact victims.”

Republicans have argued that Lifeline is a waste of taxpayer dollars and rampant with fraud. In a 2017 Government Accountability Office report, auditors were unable to verify the eligibility of 36 percent of the program’s participants through either income or participation in other qualifying programs, such as Medicaid. While advocates say these numbers are the result of the FCC’s own poor reporting system and fraud by carriers, not users, in November, the FCC voted 3-2 along party lines to initiate a series of reforms intended to cut back on program waste.

One proposed change is to only offer subsidies to carriers with their own networks, like AT&T and Verizon, which would strip eligibility from prepaid phone service “resellers” (like TracFone and Boomerang) that more than 70 percent of the program’s participants currently use. Other reforms proposed by the Republicans at the FCC include enacting a hard budget cap for the program. The move, alongside a proposed cap on access to the program after a currently undefined amount of time, could eliminate or decrease subsidies for existing recipients as well shut out millions of more eligible Americans. The FCC has already rolled back its expansion of providers under the previous administration and cut additional subsidies for tribal lands.

There are no stats on exactly how many Lifeline users fall under the category of domestic violence victims, but according to the National Network to End Domestic Violence there are roughly 10 million Americans annually who experience domestic violence. And while domestic violence is not limited to any one economic group, it is highly correlative with loss in financial security. “The reality of domestic violence victims [is even] with Lifeline they’re still barely able to keep the lights on and rent paid and reach employers,” says Cindy Southworth, executive vice president at the National Network to End Domestic Violence. “If Lifeline has devastating cuts, it will absolutely impact victims.”

According to the Center for Financial Security, 99 percent of domestic violence victims endure some form of financial abuse. It’s such an extensive problem that House of Ruth has its own designated funds to help victims pay off damaging credit debts. If cuts to subsidies alone didn’t render Lifeline useless to domestic violence victims, the proposed ban of prepaid carriers that don’t require good credit would make it useless to women whose abusers have ruined their finances.

“For anyone who has experienced domestic abuse, their phone is so much more than a simple device; it’s truly a lifeline. It’s a connection to safety and support.”

“Most of the time they have been entirely separated from families to keep them in a controlled environment,” says Jackson. “Many of them are in the process of trying to rebuild relationships. They need to have some access to call services and regain normalcy in their lives.”

According to a 2016 NNEDV survey, 77 percent of domestic violence programs surveyed gave out cellphones, but only 33 of the 287 responding agencies said they could also provide prepaid minutes for the phone, an essential benefit of Lifeline. Programs also give out more than 30 percent more nonactivated phones as prepaid ones. While a donated, deactivated phone (NSI) can still make 911 calls, the batteries often have preexisting damage that can render them unreliable. Without Lifeline phones, the number of NSI phones would likely increase. “In this game of life, we do not want victims to be given nonreliable service phones. If someone is relying on that phone they could be in serious danger,” says Southworth. Alienating victims is an important element of the abuser playbook, says Southworth. “Part of that power and control dynamics is to remove the very technology that would allow the victim to reach out to help,” she says. “It’s about, ‘You will not have contact with anybody but me.’”

Pat Brown, the executive director of the Women’s Resource Center of the New River Valley in Radford, Virginia, says roughly a third of the women that her organization serves come without any cellphone of their own. Providing them with a new one gives victims a chance to start over safely. “The greatest thing [for the women] is that it’s not a number that the abuser knows,” says Brown. “That’s really the greatest thing—the secrecy.”

“Many of them are in the process of trying to rebuild relationships. They need to have some access to call services and regain normalcy in their lives.”

Both Brown and Jackson estimated that at least one-third of the women their organizations serve require assistance in procuring new phones.

Cuts to Lifeline would follow another blow to domestic violence advocates: In February, Verizon announced it would end its Hopeline program, which donated phones to domestic violence survivors. Mary O’Doherty, deputy director at the Kentucky Coalition Against Domestic Violence, said the end of the program came as a surprise to her organization. Her organization was one of 200 that signed a letter to FCC Chairman Ajit Pai asking the agency to save Lifeline. “We’re always going to be in favor of putting more communications resources in the hands of domestic violence survivors,” says O’Doherty.

“For anyone who has experienced domestic abuse, their phone is so much more than a simple device; it’s truly a lifeline. It’s a connection to safety and support—connect with authority and connect with families’ support and reach out,” FCC Commissioner Jessica Rosenworcel, the FCC’s sole Democrat, tells Mother Jones. “It would be beyond cruel for this agency to undermine their work and something we can’t let stand.”

And while the Republican majority on the committee appears inclined to roll back the program, it’s been eight months since the initial notice of proposed rule was passed by the commission and no final vote has been scheduled.

The rest of the proposal hasn’t gained much support from traditional allies. Providers, including Verizon and Sprint, have rebuked Pai’s claims that banning resellers would encourage them to build out better networks, and even the conservative American Enterprise Institute came out against the plan.

On July 11, a group of 44 domestic violence advocacy groups, including the National Network to End Domestic Violence, filed a letter to the Federal Communications Commission, expressing their opposition to the agency’s attempt to eliminate key elements of its phone assistance program for low-income Americans, namely reducing subsidies and banning resale providers that don’t require a deposit or credit check.  “A cell phone—which can be used anywhere—enables vulnerable individuals to contact emergency services, family members, health care and social service providers, and, in short, make them feel less alone and make them safer,” the groups stated in the letter.

But advocates aren’t holding their breath for the FCC, which recently rejected a petition to reverse its decision to scrap extra subsidies for Tribal Lands, to rule in their favor. Jackson says that House of Ruth will have to increase its fundraising efforts to make sure that increased demands from their flexible funding don’t detract from other important services they offer.

“I don’t even want to think about not being able to provide a service,” says Jackson. “You have to have these services to have these women and children move forward.”