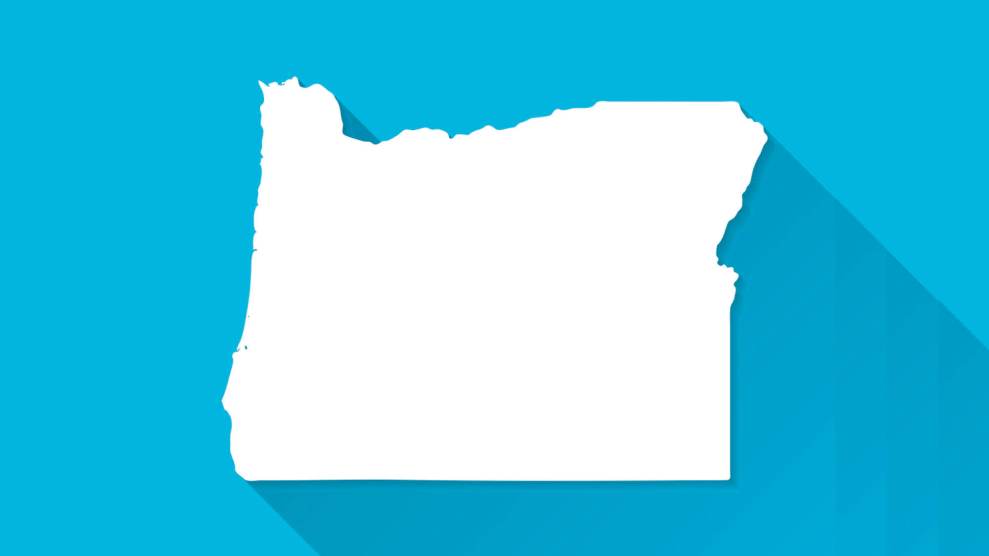 One of the country’s most pro-choice states has joined Alabama and West Virginia in adding a measure to the November ballot that would restrict abortion access.

An initiative that would prohibit state funding for abortion eked its way onto the Oregon ballot last Friday, gathering 221 more signatures than needed to qualify, according to the secretary of state’s office. The announcement follows more than six years of grassroots campaigning by anti-abortion activists led by chief sponsor Jeff Jimerson, who failed to qualify similar ballot initiatives in the last three election cycles. Jimerson, the executive director of Oregon Life United, told Oregon Public Broadcasting that the effort had been “truly monumental.”

The ballot measure closely mirrors a ban on federal funding for abortion that was passed in 1976, three years after the Supreme Court’s Roe v. Wade decision. That law, known as the Hyde Amendment, blocks federal funds from being spent on abortion except in cases of rape, incest, or life-endangering pregnancies. Oregon’s Measure 106, as the initiative is expected to be called, decrees, “The state shall not spend public funds for any abortion, except when medically necessary or as may be required by federal law” and lists the same exceptions as the Hyde Amendment.

NARAL Pro-Choice Oregon has stopped similar ballot initiatives in the past through court fights. Misleading wording in the initiatives’ proposed text repeatedly led to their disqualification, the Portland Mercury reports. This time, though, the initiative’s text is crystal clear, says NARAL Pro-Choice Oregon executive director Grayson Dempsey. “It’s a good thing that it’s transparent, and people know what they’re voting on,” Dempsey says. “The bad thing is they were able to move forward in their signature gathering.” She notes that Oregon is widely considered one of the most pro-choice states in the nation and is the only state that does not have any laws restricting abortion.

Measure 106 is one of three anti-abortion measures that will be put to voters in November. Last April, Alabama state legislators decided to send a constitutional amendment to voters that would codify “the sanctity of unborn life and the rights of unborn children, including the right to life.” If it passes this fall, it would prohibit the state constitution from providing the right to an abortion or requiring funding of abortions.

The amendment’s sponsor, Republican state Rep. Matt Fridy, told AL.com that the amendment is based on Tennessee Amendment 1, a 2014 ballot initiative that added similar language to Tennessee’s constitution. It also empowered state legislators to “enact, amend, or repeal statutes regarding abortion.” Shortly after that amendment was approved by voters, eight Tennesseans sued, alleging that the state used an unconstitutional method to count election results for Amendment 1. In January, a federal appeals court upheld the amendment.

In West Virginia, a similar fight is brewing at the ballot box. State legislators decided in March to put the “No Constitutional Right to Abortion Amendment” on the ballot. It would amend the state constitution with exactly the same sentence that appeared in the 2014 Tennessee amendment. The reproductive justice organization WV Free and the American Civil Liberties Union of West Virginia have said they plan public-education campaigns opposing the amendment. The anti-abortion group West Virginians for Life has raised more than $8,000 and developed a campaign supporting the measure.

Since Supreme Court Justice Anthony Kennedy announced his retirement in June, reproductive rights advocates at the national and state levels have been on edge. If a case challenging the standard set by Roe v. Wade goes in front of a Supreme Court that is hostile to abortion, the 1973 ruling could be overturned, sending the question back to the states. Currently, nine states have laws that would immediately ban abortion; other state statutes would make self-induced abortions illegal or criminalize abortions after 24 weeks.

In Oregon, Dempsey is working with No Cuts to Care, a campaign that aims to educate voters about Measure 106’s potential impact on health care access for low-income Oregonians and public employees. Oregonians on public health insurance would not be able to use it toward abortions if the measure passes. The group is also collecting pledges to vote “no” on the ballot initiative. Dempsey says about 1,000 people signed the pledge in the first 24 hours. “I want to make sure it doesn’t seem like we are taking anything for granted—or that we can take anything for granted,” Dempsey says. “The reality is, seeing these kinds of threats is a reminder that we need to mobilize and get people out there.”