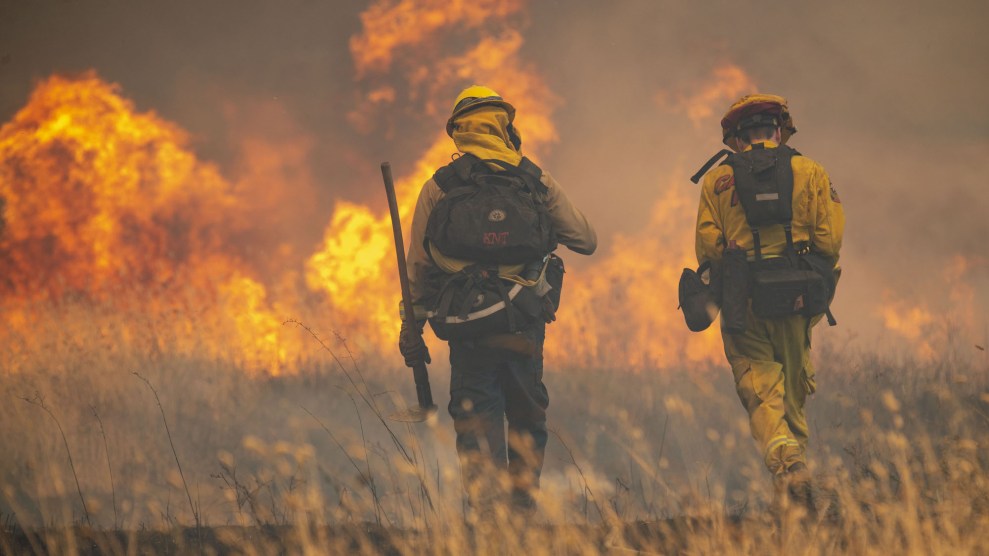 In July, while Santa Clara County firefighters were battling the Mendocino Complex Fire, now the largest wildfire in California history, Verizon slowed data service to one of their emergency response vehicles. The telecom then allegedly refused to restore bandwidth until the department bought a new plan that cost more than twice its original one.

That’s according to documents filed as part of a lawsuit against the Federal Communications Commission, which recently decided to rescind net neutrality rules. “In light of our experience, County Fire believes it is likely that Verizon will continue to use the exigent nature of public safety emergencies and catastrophic events to coerce public agencies into higher cost plans ultimately paying significantly more for mission critical service-even if that means risking harm to public safety during negotiations,” Santa Clara County Fire Chief Anthony Bowden wrote in a declaration filed in federal court in Washington, DC.

The suit was filed on Monday by 22 state attorneys general and other state agencies, including the Santa Clara County Central Fire Protection District, that seek to overturn the FCC’s recent repeal of net neutrality rules. Net neutrality rules implemented under President Barack Obama had prohibited internet providers from slowing down or “throttling” their users’ bandwidth.

Describing how his unit’s internet service had been throttled, Santa Clara County Fire Captain Justin Stockman wrote that a “device that can normally act like a modern broadband internet connection is slowed to the point of acting more like an AOL dial up modem from 1995.” His firefighters first began experiencing problems with internet speeds in the fire department’s command and control vehicle when battling the Pawnee Fire in late June. At the time, according to emails between Verizon and Santa Clara County Fire filed in court, a Verizon representative said the department would need to pay an additional $2 per month to restore the vehicle’s data to its normal speed. “Public safety should never be gated down because of our critical infrastructure need for these devices,” Deputy Chief Steve Prziborowski wrote to Verizon.

In the emails, Verizon confirmed the throttling but would not budge on waiving the price increase. Meanwhile, the vehicle was moved from the Pawnee Fire to the Mendocino Complex Fire, where firefighters continued to experience slow internet speeds. Some began to use their personal devices to send and receive crucial information. As Bowden noted in his declaration, the unit relies on specialized software and Google Sheets to do “near-real-time resource tracking.”

“Dated or stale information regarding the availability or need for resources can slow response times and render them far less effective,” Bowden wrote. “Resources could be deployed to the wrong fire, the wrong part of a fire, or fail to be deployed at all. Even small delays in response translate into devastating effects, including loss of property, and, in some cases, loss of life.”

In his final email to Santa Clara County Fire on July 30, the Verizon representative suggested that the department subscribe to a new data plan that cost more than twice as much as the one it had been using. Only after the fire department bought the plan did the company end the data throttling, Bowden wrote.

Verizon responded in a statement that the refusal to lift the throttle was “a customer support mistake” and that the data service should have been restored to full speed, in keeping with the company’s standard practice in emergency situations. “This situation has nothing to do with net neutrality or the current proceeding in court,” the company wrote.