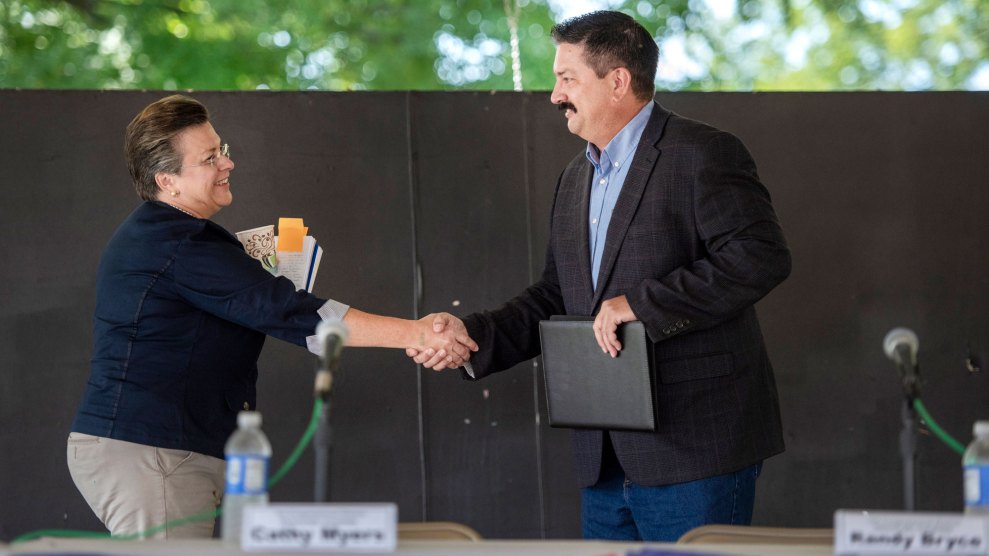 When Randy Bryce, a union ironworker, entered the Democratic primary for Wisconsin’s 1st Congressional District last June, the effect was immediate. Buoyed by a viral announcement video in which he invited his prospective Republican opponent, House Speaker Paul Ryan, to switch jobs with him—”you can come work the iron and I’ll go to DC”—he raised nearly half a million dollars in two weeks and became a fixture on cable news. Bryce’s story, as a working-class candidate fighting for the issues that would make a difference in his own life, resonated with a Democratic Party scrambling for an identity. As I reported in a profile of Bryce last fall, his video became required viewing among Democrats on Capitol Hill, and he picked up support from progressive heavyweights such as NARAL Pro-Choice America, the Working Families Party, and Vermont Sen. Bernie Sanders (who has visited the district twice so far to campaign with Bryce). His campaign has now raised more money than almost any other House challenger in America. And after Ryan announced his retirement this spring, the underdog became a real contender.

But Bryce wasn’t the only Democrat in the race. Just four days after his video debuted, Cathy Myers, a public school English teacher and member of the school board in Ryan’s hometown of Janesville, jumped into the race. Myers rides a Harley and is active in her local union, but no one talked about her as if she’d been conjured out of Bruce Springsteen lyrics. She didn’t make it on Pod Save America, and her endorsement list is still devoid of the kinds of big names that have flocked to Bryce.

But Myers is trying to make a race of it nonetheless, in part by using her opponent’s fame against him. Bryce has “mustache memes” and a catchy Twitter handle, she says, but she has everything else. Myers says she’s tired of being asked to “take a backseat to less qualified men.” After the Democratic Congressional Campaign Committee added Bryce to its “Red to Blue” list last March—a designation the DCCC uses for its preferred candidates in the most competitive races—she “re-released” her first campaign ad in response. In it, a diverse cast of women march together saying, “We will not be ignored.” The message was ostensibly directed at President Donald Trump. But it could have also described her campaign.

“People don’t like machine-type politics,” Myers says. “They want an honest-to-goodness authentic primary where voters get to decide the candidate.”

Myers’ story is a familiar one in 2018, where record numbers of candidates have flooded primary fields in places that have often gone years without a real race. Candidates who might have cleared the field in years past have struggled just to be heard. That’s led to a lot bad blood—and allegations that party leaders and progressive organizations have been too heavy-handed in their roles as gatekeepers. In turn, jilted Democratic candidates from New York to Texas have sought to channel that backlash into insurgent campaigns.

“People don’t like machine-type politics,” Myers says. “They want an honest-to-goodness authentic primary where voters get to decide the candidate.”

Whether it’s working remains to be seen. When the Congressional Leadership Fund (CLF), a super-PAC affiliated with the now-retiring Ryan, dropped a poll of the race last month, it showed Myers and Bryce tied. Myers pounced on the news from the Republican group, which matched internal tracking numbers her campaign shared with Mother Jones. But the CLF is hardly a disinterested party, and would like nothing better than to sow discord about a popular Democrat. Bryce’s own internal polling gives him a commanding lead. There have been no independent surveys of the race.

While the NARAL endorsement of Bryce stings, she has picked up the support of the National Organization for Women and Forward Kenosha, a leading Indivisible-style group in the district whose leadership is entirely women. “They’re both known, they’re both activists in the community, and I think there’s no dislike for either,” says Terrance Warthen, co-chair of Our Wisconsin Revolution, the local affiliate of Our Revolution, the political organization launched by Sanders following his 2016 campaign. “They’re both great progressives, and I think everyone’s looking forward to supporting the primary winner in the fall.” One sign that Myers has made at least some headway came in July, when Our Wisconsin Revolution declined to back a candidate in the primary even though Sanders already did. A survey found that 54 percent of the group’s members supported Myers. (The threshold for a formal endorsement was 60 percent.)

Myers, like Bryce, entered the race after years toiling at the grassroots level of politics. After dabbling as a local news producer in Iowa, where she grew up, she moved to Illinois to teach and eventually found a home just across the state line in Janesville. During campaign season she would open up her house—at the time, just down the street from Ryan’s—to young volunteers who needed a place to crash (it’s how she met her current campaign manager). Myers entered the race, she told me, because she was furious with Ryan’s proposal to roll back the Affordable Care Act and upset about Education Secretary Betsy DeVos’ support of school vouchers.

The policy differences between Myers and Bryce are comparatively small. In a district that Trump won handily, both are running on Medicare-for-all and a $15 per hour minimum wage. Bryce wants to abolish the Immigration and Customs Enforcement agency; Myers wants ICE to be moved to the Department of Justice and calls its agents “thugs.” Though Myers voted for Clinton in the 2016 primary, both support large portions of Sanders’ agenda (he carried all but one county in the state in the 2016 Democratic primary) and are active members of labor unions.

But as the race has tightened, the primary has gotten increasingly bitter. Myers has seized on a trickle of stories about Bryce’s personal finances, campaign spending, and legal trouble to make the case that she’s the best prepared for a general election that, with the sudden departure of Ryan in April, now looks more enticing than ever.

In July, Myers’ campaign said it was filing a complaint with the Federal Election Commission alleging that Bryce had used campaign funds last year to pay off a 15-year-old personal debt to an ex-girlfriend who had loaned him money to buy a car. The check came from a law firm, the campaign noted, not from Bryce—and the same law firm had been paid by Bryce’s campaign. “That money is intended to go toward your campaign,” Myers says, “not to alleviate anything that you owe other people. It’s not your money.”

Bryce’s campaign, though, says it has yet to receive any formal complaint, and the law firm has denied that there was anything untoward about how the debt was paid off. “Our campaign is solely focused on talking to voters about the issues in Southeast Wisconsin, and we hope all the candidates in the race for the First Congressional District do the same,” Bryce spokeswoman Julia Savel said in a statement. “We are in construction, not demolition.”

Last November, the Milwaukee Journal-Sentinel reported that Bryce had paid off a years-old $1,257 debt for unpaid child support two months after he entered the congressional race. Bryce at the time blamed the “Republican attack machine.” His campaign, as it has done in response to previous inquiries, passed along a statement from Bryce’s ex-wife, Faye Boudreaux, defending Bryce and casting the debt in political terms as a manifestation of the struggles of the working man. “When he did fall a little behind on child support, he reached out to me and we worked things out among ourselves, just like millions of other families do,” she said. “But most families don’t have to deal with the details of their personal struggles being in the public eye—to be judged when truly the facts are not known.”

Since the story though, Myers has taken to talking about her own personal struggle as a single mother whose ex-husband also fell behind on child support. “I took a second job literally shoveling shit at a horse farm so I could make sure I had a little bit of grocery money until things changed, just to tide me over,” Myers says. “And I did it for a couple of months and he was able to get caught up. And I think the difference here is he knew he had to get caught up.”

These issues came to a head at the candidates’ first debate in July. Just two days before their showdown in Lake Geneva, CNN reported that Bryce had been arrested for a DUI in 1998—one of nine arrests on his record. (Several of those arrests were at protests, including most recently on March 5, when both he and Myers were booked at a protest against Trump’s immigration policies.) While flogging Bryce’s personal troubles, Myers sought to use his national celebrity against him. “We’re not going to hold Trump accountable with viral tweets and poll-tested one-liners,” she said.

A few weeks later, her campaign released a digital ad highlighting both issues. As news clips about Bryce’s arrests and delinquent child support flash across the screen, the narrator, a young single mother, says, “We need someone who’s looking out for us.”

Bryce has declined to wade into the fight with Myers, but after her ad dropped, one of his top surrogates, Wisconsin Rep. Mark Pocan, argued that the race’s negative turn was playing into Republicans’ hands:

@CathyMyersWI negative campaign against @IronStache in @SpeakerRyan district only works to serve Republicans in the Fall. Too bad she wouldn’t sign the @WisDems clean campaign pledge or run positively on her own.

The increasingly heated contest—with most of the fire coming from Myers’ end—reflects the changing dynamics of the race and the Democratic Party since the primary began. Both candidates have raised significant sums of money—Bryce’s $6.2 million haul is the highest of any Democratic congressional challenger who hasn’t self-funded; Myers has raised $1.3 million—with the expectation they’d take on Ryan and his bottomless campaign war chest.

But what started as a symbolic struggle against Ryan, the consummate icon of Republican power in a state that Democrats let slip away, is now an open seat race like any other. It may be a much more winnable one, too: Whoever survives the August 14 primary will likely face Republican Bryan Steil, a corporate lawyer and former Ryan staffer. In a sign of the new landscape, University of Virginia elections analyst Larry Sabato recently changed his rating of the race to “toss-up.”

Bryce entered the campaign on a promise to repeal and replace Paul Ryan. It turns out that was the easy part.