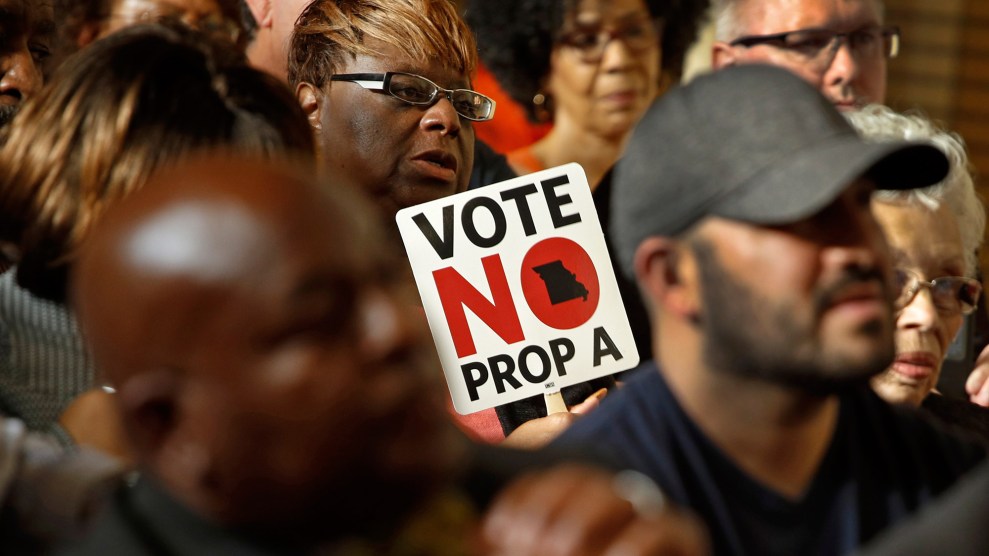 An anti-Proposition A rally in Kansas City, Mo., in July. Charlie Riedel/AP

On Tuesday, Missouri voters sent a message to the Republican-controlled state Legislature: The state must protect unions. It is the first state since 2012 to overturn a right-to-work law that aimed to weaken unions by severely restricting their cash flow.

The initiative voters considered Tuesday, known as Proposition A, determined whether to put into effect the right-to-work bill signed into law last year by then-Gov. Eric Greitens.

The legislation, known as Senate Bill 19, would have prevented public and private sector workers from being required to join unions as a condition of their employment, and would also have protected non-union members from paying so-called “fair share” fees to cover the costs of union representation. Opponents of right-to-work laws argue that workers could choose not to join a union or pay dues but still reap the benefits of its collective bargaining with employers. Last year, Missouri joined a handful of other states—such as Wisconsin, West Virginia, and Michigan—in passing right-to-work legislation.

But last year, after Greitens, a Republican, signed the measure, labor groups managed to get enough signatures to put the bill up for a public vote this year. In the meantime, the law did not take effect. Initially, the vote was scheduled to take place in November 2018, when Democratic Sen. Claire McCaskill will face a tough reelection fight. Then in May, Republican state lawmakers opted to move the vote’s date up to August, leading Democrats to worry about union turnout during the general election.

Tuesday’s vote in Missouri serves as the first test of the right-to-work movement’s momentum since a crucial Supreme Court decision in June dealt a blow to unions nationally. In Janus v. American Federation of State, County, and Municipal Employees, Council 31, the court ruled that public-sector unions could no longer require fees for representation from non-union members, overturning years of precedent and effectively making right-to-work the standard in public-sector unions. Since the decision, public-sector unions in Pennsylvania, New York, and elsewhere have lost millions of dollars in fees, hitting unions’ pockets and forcing them to trim budgets and cut staff, the Wall Street Journal reported.

The Supreme Court’s June decision, though, didn’t directly impact private-sector unions, which make up just 6.5 percent of the national workforce. Mark Mix, president of the National Right to Work Committee, told the Associated Press this month that he saw Missouri’s right-to-work legislation, which would impact both public- and private-sector unions, as “the next battle, if you will, in this ongoing fight to end compulsory unionism in America.”

Conservative groups have, over the years, helped steer anti-union provisions through state legislatures and backed legal challenges against unions, particularly in labor strongholds like Michigan and Indiana. And last year, House Republicans unsuccessfully tried to advance a national right-to-work bill that would have devastated both private- and public-sector unions across the country. Pro-business, right-to-work supporters argue that these laws would spur economic growth and give workers the freedom to choose whether to join a union. Researchers challenge those claims, noting that the laws may have no effect on state economies and could actually lead to lower worker wages.

In July, the Economic Policy Institute, a Washington-based think tank that opposes right-to-work policies, estimated that if the Missouri bill went into effect, 60,000 fewer of the state’s workers would be covered by union contracts. Union members made up nearly 9 percent of Missouri’s workforce last year. Opponents of the state’s right-to-work bill, including the labor-backed campaign We Are Missouri, spent at least $15 million on the Proposition A campaign—five times more money than was raised by the bill’s supporters, including the National Right to Work Committee. The Missouri chapter of the Koch-backed Americans for Prosperity sent mailers to try to sway voters to support the bill.

Ahead of the vote, Heidi Shierholz, policy director at Economic Policy Institute and former chief economist in President Barack Obama’s Labor Department, told Mother Jones that if right-to-work went into effect in Missouri, private-sector unions would be weakened and see a reduction of membership and that the law could lower workers’ wages, particularly for women and people of color. “It hurts workers and helps corporate managers,” Shierholz said.

Instead, voters on Tuesday decided that private-sector unions should maintain the same rights they had before, giving the groups a respite for now while blunting the right-to-work movement. AFL-CIO President Richard Trumka predicted as much, telling reporters last week, “We’re going to win because it’s what workers want and because making our voices heard is what we do best.”