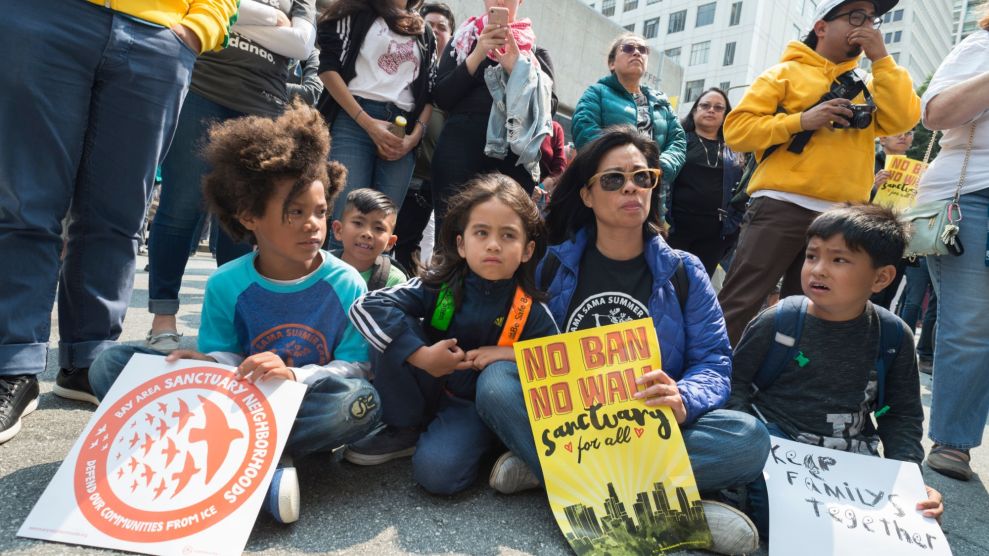 The Department of Homeland Security is planning to dramatically expand its power to deny legal status to millions of immigrants who use public benefits like health insurance subsidies or food stamps, according to a draft rule reported on Tuesday by NBC News. NBC is the latest news outlet to confirm the contents of a proposal that President Donald Trump’s administration has been floating for months and that could make it much more difficult for legal immigrants to become citizens.

As NBC reports, the number of immigrants granted green cards is already declining. The Trump administration’s proposal could push that number down even more by making it easier to deny a green card or change of status to immigrants who use almost any of the public benefits to which they’re entitled.

That’s because the proposal would greatly increase the number of people who could be denied legal status because the government considers them a “public charge.” The term “public charge” has been used in U.S. immigration law for more than a century, but since 1999 it has applied only to immigrants who are primarily dependent on cash benefits like the Temporary Assistance for Needy Family Program or who’ve been institutionalized long-term on the government’s dime. The rule change would vastly broaden that definition to include immigrants who use non-cash benefits likeMedicaid, the Child Health Insurance Program, the Supplemental Nutrition Assistance Program, and many others.

The proposal could affect as many as 47 percent of noncitizens currently in the U.S., according to an analysis by the Migration Policy Institute of an earlier leaked draft of the rule change. (In contrast, only 3 percent of noncitizens are affected by the rule as it currently stands.) That’s partly because the proposal would also allow DHS to consider benefits received by a person’s dependents. For example, immigrants could be penalized if they have children who use food stamps—even if those children are U.S. citizens.

About 10.3 million noncitizens live in families in which at least one member receives some kind of public benefit, according to the MPI report. A draft of the rule published earlier this year by the Washington Post said the administration also plans to penalize people who have medical conditions and can’t show that they’re able to pay for treatment with unsubsidized insurance.

Another report, released by the Center on Budget and Policy Priorities, noted that the changes could have particularly damaging effects on pregnant women and children, since the rule applies to programs that provide crucial nutrition and health services for these populations. For instance, the rule would penalize immigrants for using the Special Supplemental Nutrition Program for Women, Infants, and Children, which provides healthy food, breastfeeding support, and nutrition education to low-income mothers and their kids.

The rule could affect immigrants who are in the U.S. legally and hoping to extend their status or get a green card, as well as those hoping to join their spouses from abroad. While using public benefits wouldn’t automatically disqualify immigrants from being allowed to stay in the country, it would count against them when government officials are considering their applications. This means that many families would have to weigh the value of getting essential food and health insurance benefits against the cost of potentially being denied legal status.

“The cost will be felt in declining health, declining well-being, and falling future economic trajectories,” said Michael Fix, one of the authors of the Migration Policy Institute report.

Some immigrants, like refugees and asylees, are exempt from the proposed rule. But immigration groups worry that they could be less likely to use public benefits anyway, out of a mistaken belief that their immigration status would be affected.

“For people who don’t read the Federal Register, it’s going to be really confusing,” Fix said. Fix and other researchers who have studied this issue noticed a similar phenomenon in the 1990s, when immigrants were much less likely to use public benefits after the passage of sweeping welfare reforms—even if the reforms didn’t affect their eligibility.

There’s some evidence that immigrants have already become more wary of using public benefits in the past couple years because of deportation fears. After Trump took office, for instance, San Franscisco reported a decrease in food stamp use among immigrant households. Advocates like Fix worry that participation in public benefits could decrease even more if the proposal is put into effect —and that seems to be what the government is hoping for.

“The administration is committed to enforcing existing immigration law, which is clearly intended to protect the American taxpayer by ensuring that foreign nationals seeking to enter or remain in the U.S. are self-sufficient,” a DHS spokesperson told NBC News. “Any proposed changes would ensure that the government takes the responsibility of being good stewards of taxpayer funds seriously and adjudicates immigration benefit requests in accordance with the law.”

The draft is currently being reviewed by the Office of Management and Budget. The proposed rule will be published and opened up for public comments after that review is complete, a U.S. Citizenship and Immigration Services spokesman told Mother Jones last week.