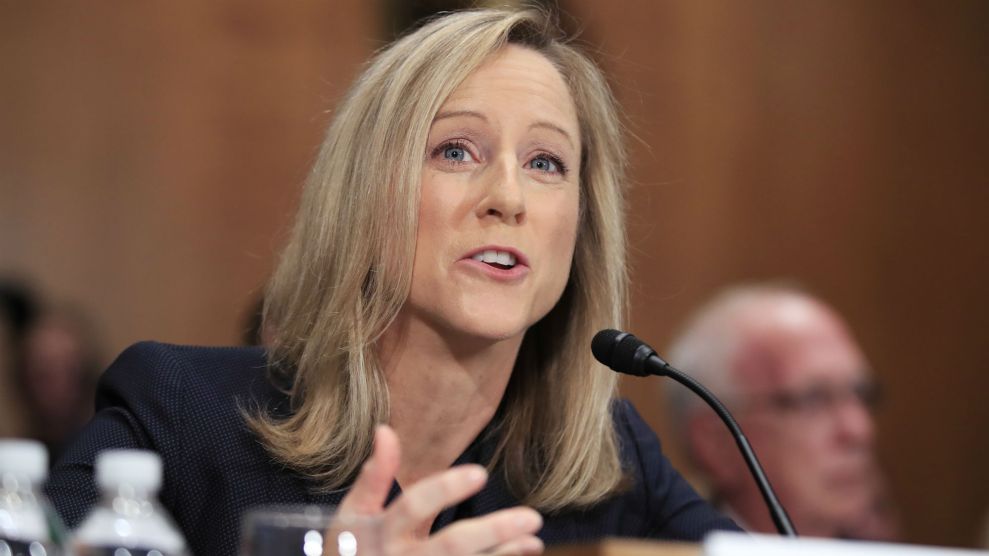 On Thursday, the Senate Banking Committee narrowly approved Kathy Kraninger, currently an associate director at the White House Office of Management and Budget, to be the next head of the Consumer Financial Protection Bureau—the Wall Street watchdog agency established after the 2008 financial crisis to keep tabs on big banks.

The vote to approve Kraninger’s contentious nomination fell on party lines: The committee’s 13 Republicans voted for her, while all 12 Democrats opposed her nomination. They had concerns with her lack of experience in consumer finance and banking, and her continued equivocation over her role in overseeing the two federal agencies—the Department of Homeland Security (DHS) and the Department of Justice—that implemented the administration’s now-discontinued family separation policy.

At Kraninger’s July confirmation hearing, Sen. Elizabeth Warren (D-Mass.)—the original architect of the CFPB, and one of the agency’s major champions in Congress—and other Democratic lawmakers peppered Kraninger with questions about her alleged involvement in family separations. They wanted to know what type of advice she provided for the policy’s roll out during her participation in high-level meetings with officials.

Kraninger gave evasive answers, often repeating that she had no role in “setting” the administration’s family separations policy; Attorney General Jeff Sessions crafted the administration’s “zero tolerance” policy that led to separations at the border. But she also refused to elaborate on any involvement she may have had in the development or implementation of the widely-condemned policy. Her vague statements came after weeks of effort by Sens. Warren and Sherrod Brown (D-Ohio) to get clear answers from Kraninger. In June, the pair sent a joint letter asking OMB and Kraninger asking for documentation detailing her role in the “cruel” administration policy. But given Kraninger’s high-level position at OMB overseeing key homeland security agencies, it’s quite likely she had significant involvement.

“These are innocent children who might be scarred forever because of this policy. It’s fundamentally immoral—and you, you, were a part of it, Ms. Kraninger,” Sen. Warren said at last month’s hearing. “That’s a moral stain that will follow you for the rest of your life. And if the Senate votes to give you a big promotion, then it is a stain on the senators who do so.”

“That’s a moral stain that will follow you for the rest of your life. And if the Senate votes to give you a big promotion, then it is a stain on the senators who do so.”

Senators also questioned Kraninger’s lack of experience in the world of consumer finance, should she be given responsibility for regulating the agency that serves as a check on the financial industry. The White House has argued that Kraninger’s management experience in government and homeland security are sufficient qualifications for her to head the CFPB, a line of reasoning that Warren questioned last month as well. She again pointed to family separations and also to Kraninger’s role overseeing the Federal Emergency Management Agency and its botched response to Hurricane Maria in Puerto Rico. Her office issued a staff report outlining the budgeting problems and planning oversights that, under Kraninger’s watch, led to the “humanitarian catastrophe.”

But on Wednesday, Senate Banking Committee chairman Sen. Mike Crapo (R-Idaho) expressed confidence in Kraninger’s management abilities. He told the Los Angeles Times that “her depth and diversity of public service experience” gave him “confidence she is well prepared to lead the bureau.”

Kraninger’s nomination will now go before the full Senate. If confirmed, she’ll replace her current OMB boss, Mick Mulvaney, and would serve a five-year term. For the last year, Mulvaney has been serving as acting director of the CFPB while also doing his job as OMB director. A longtime foe of the CFPB—as a congressman, Mulvaney cosponsored a bill that proposed shuttering the agency entirely—he’s implemented a number of reforms aimed at diminishing the CFPB’s power. These include dismissing advisory boards, relaxing regulations on predatory lenders, spending down the agency’s reserves, and even changing the agency’s name. Kraninger is widely expected to carry on this deregulatory agenda.

During last month’s confirmation hearing, Kraninger agreed with the assertion Mulvaney has often made that the CFPB’s authority needs to be reined in, because the bureau has too much independence from Congress and the president. “I’m very open to changes in that structure that will make the agency more accountable and transparent,” Kraninger said.