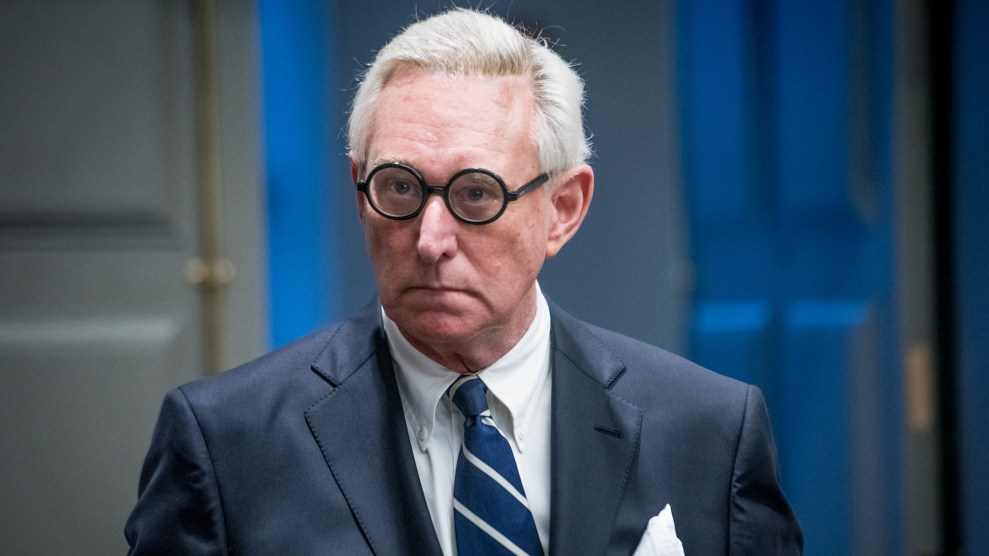 As special counsel Robert Mueller zeroes in on Roger Stone, prosecutors are looking into seemingly threatening emails the longtime Trump adviser sent to a former radio host, sources say. The existence of some of those emails was first reported by Mother Jones in May.

A lawyer for Randy Credico, the radio host, confirmed Friday that he received a subpoena from Mueller’s office requesting that Credico testify before a grand jury in Washington on September 7. The attorney, Martin Stolar, said he believes prosecutors want to ask Credico about his contacts with Stone and also potentially about WikiLeaks founder Julian Assange. Assange called into Credico’s radio show in 2016, and Stone has claimed Credico gave him information from Assange about plans to release hacked emails related to Hillary Clinton.

According to two people familiar with the matter, investigators also want to question Credico about a series of emails Stone sent him earlier this year, after Credico publicly disputed Stone’s claims about their interactions. “They said they saw some emails,” one of the people said, adding that the investigators are interested in the extent to which Credico perceived Stone’s statements as threats.

“I am so ready. Let’s get it on. Prepare to die cock sucker.”

Stone’s story on his contacts with WikiLeaks and Credico has evolved. At a political event on August 8, 2016, Stone said, “I actually have communicated with Assange” about WikiLeaks’ plan to release material on Clinton. But last year, prior to testifying before the House intelligence committee in September, Stone said he had no contact with Assange but that a “journalist” who he later said was Credico acted as his “intermediary” to Assange. Stone’s lawyer later told the committee that “Mr. Stone concedes that describing Credico as a go-between or intermediary is a bit of salesmanship.” But Stone still claims that Credico confirmed for him that Assange’s claim that he had material on Clinton was correct and that Assange planned to release information on Clinton in October.

Credico, a comedian and political gadfly who backed Bernie Sanders’ presidential bid, knows Stone through their mutual work on libertarian-themed campaigns in New York. In 2016, Stone, who also appeared on Credico’s radio show, pressed Credico for information on Assange’s plans, both men say. But Credico says he never conveyed Stone’s questions to Assange and merely referred Stone to Assange’s public statements. This year, Credico appeared to draw Stone’s ire by conducting interviews in which he disputed Stone’s accounts of their interactions.

“I am so ready. Let’s get it on. Prepare to die cock sucker,” Stone emailed Credico on April 9 in response to Credico indicating he would publicly challenge Stone’s description of their 2016 contacts. Credico shared many of Stone’s emails with Mother Jones, and said he indeed interpreted Stone’s missives as threats aimed at deterring him from contradicting Stone’s claims.

Stone has said he was not threatening Credico. He told Mother Jones in May that Credico had “told me he had terminal prostate cancer,” and that the April 9 email “was sent in response to that.” Credico says he does not have prostate cancer and did not tell Stone he did.

In a text message Friday, Stone said that all his messages were “laced with a consistent theme that [Credico] should stop lying and tell the truth.”

In a follow-up text, Stone wrote, “If he is compelled to testify I would urge Mr. Credico to simply tell the truth. Any deviation from these facts as stated would be perjury which I could easily prove.” (Read Stone’s full statement below.)

Credico is one of at least eight Stone associates who have been questioned by Mueller. Several worked in 2016 for a super-PAC controlled by Stone. On Friday, a federal district court judge in Washington, DC, held Andrew Miller, a Stone aide, in contempt of court for refusing to appear in front of the grand jury to answer questions about his work for Stone.

Kristin Davis, another Stone associate, testified before the grand jury Friday afternoon. Davis, who once ran a prostitution ring, has been referred to as the “Manhattan Madam.” She pleaded guilty in 2014 to drug distribution charges after she was caught in a sting buying ecstasy, Adderall, and Xanax pills from an FBI informant. Stone helped run Davis’ longshot 2010 New York gubernatorial bid, in which she ran on a platform of legalizing marijuana and prostitution. Davis, like Miller, has worked for Stone. Stone says he is the godfather of Davis’ two-year-old son.

Prosecutors’ main interest in Stone likely relates to his contact with people involved in Russian interference in the 2016 election.

Last month, Mueller indicted 12 Russian intelligence agents for hacking emails from the Democratic National Committee, the Democratic Congressional Campaign Committee, and Clinton’s campaign. The indictment seems to describe Stone, though he is not named, as an American who communicated with the Russian hackers about the stolen emails. The indictment says that “a person who was in regular contact with senior members of the presidential campaign of Donald J. Trump” exchanged messages with “Guccifer 2.0,” which prosecutors believe was a front for Russian military intelligence. Stone has acknowledged contacts with Guccifer 2.0 and WikiLeaks, which is believed to have helped disseminate emails stolen by the Russians.

Stone has said he is “probably” the Trump associate cited in the indictment. In a July 13 statement, Stone said his contact with Guccifer 2.0 was “benign” and “provides no evidence of collaboration or collusion with Gufficer 2.0 or anyone else in the alleged hacking of the DNC emails.”

Unsealed court documents show that Mueller subpoenaed Miller for information about Stone and about contacts with WikiLeaks, Assange, and Guccifer 2.0, the Washington Post reported.

In June, Stone revealed that he met in May 2016 with a Russian man who offered to provide damaging information about Clinton if President Donald Trump paid him $2 million. Stone says he rejected the offer and has suggested it was part of an FBI effort to entrap him.

Though Stone has responded defiantly to investigators for more than a year, there are indications he is feeling the pressure.

In his interview Thursday on CNN, Stone said that there are “no circumstances” in which he would cooperate against Trump. But, he said, “I would not rule out cooperating if they think I can be helpful in some area.”

“I have testified truthfully before the House Intelligence Committee that Randy Credico was the source who confirmed Assange’s June 2016 CNN interview in which the Wikileaks publisher said he had substantial information on Hillary Clinton. As I testified Credico told me this material would be released in October. I now realize that Credico’s source was a Wikileaks lawyer and not Assange himself. At no time did Credico tell me what the source, content or scope of the WikiLeaks disclosures would be. I would note that Mr. Credico has avoided testifying on these matters under oath. If he is compelled to testify I would urge Mr. Credico to simply tell the truth. Any deviation from these facts as stated would be perjury which I could easily prove.”