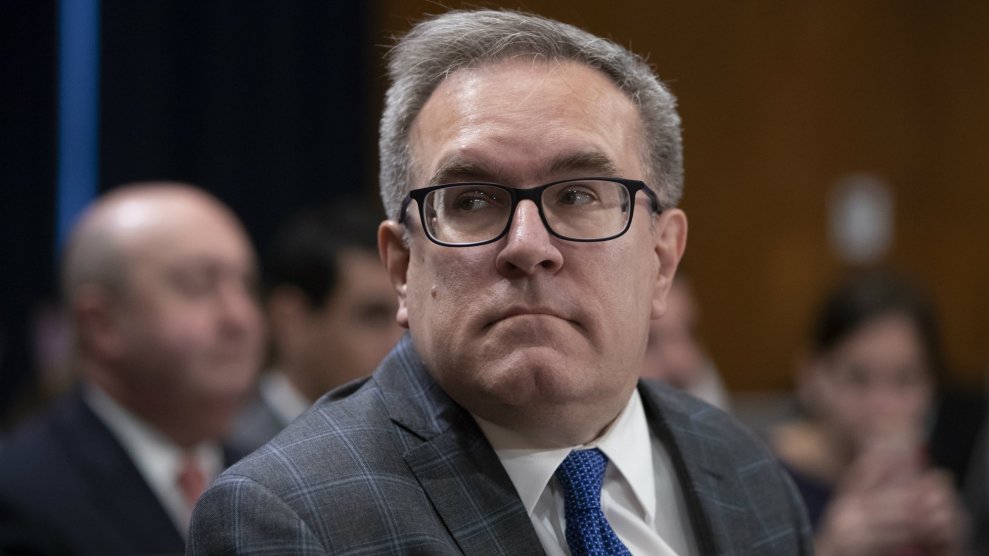 When embattled Environmental Protection Agency head Scott Pruitt resigned on July 5, one of his top critics in the Senate used the occasion to denounce Pruitt’s “brazen abuse of his position” and “possibly illegal behavior.” That lawmaker, Sen. Tom Carper (D-Del.), was singing a very different tune when he addressed Pruitt’s acting successor Andrew Wheeler for the first time Wednesday in a two-hour hearing before the Environment and Public Works committee.

“I’ve been asking for an oversight committee with the EPA administrator for many months, and I’m pleased that our committee is holding that hearing today,” Carper said. “I’m even more pleased that sitting at the witness table is our acting administrator and not his predecessor.” In a nod to the EPA chief’s habit of collecting Coca-Cola memorabilia, Carper followed up his opening remarks with a gift: a bottle of Coke from the Senate cafeteria with the name “Wheeler” on it. Before accepting the gift, Wheeler joked that he would “need to clear that through our ethics in-house.”

Before accepting the gift, Wheeler joked that he would “need to clear that through our ethics in-house.”

Few hearings that begin with a gift exchange from a member of the minority party proceed into more contentious territory, and this one was no different. Democrats pressed Wheeler on the few, major decisions he has made since becoming acting administrator, but mostly stuck to the same criticisms they had levied at Pruitt minus the personal vitriol. During his tumultuous 17 months running the EPA, Pruitt sparked over a dozen federal inquiries into his questionable spending decisions and alleged retaliation against agency employees.

Even though Wheeler, a former coal lobbyist, has signaled that the agency will continue Pruitt’s rollbacks of several Obama-era environmental regulations, Democrats found little to criticize about his personal conduct. This was in contrast to Pruitt, an unabashed Trump acolyte who attributed his election to “God’s providence,” and who was much more combative during his infrequent appearances before lawmakers. Wheeler, a veteran of Capitol Hill from his stint as legislative aide to the Environment and Public Works committee and his role as chief counsel to former chairman Sen. James Inhofe (R-Okla.)—where he had a reputation for “playing hardball“—maintained an amiable and professional decorum throughout his appearances on Capitol Hill.

Nonetheless, Wheeler’s talking points on some of the controversial issues before the EPA remained nearly indistinguishable from Pruitt’s. Sen. Cory Booker (D-NJ) asked if Wheeler intended to uphold Pruitt’s decision to “indefinitely delay” an Obama-era imperative to ban the dangerous chemical trichloroethylene. Booker described an Indiana teenager who died of brain cancer after “high-level exposure” to TCE, whose family members were seated in the gallery. Wheeler would not commit to any set course of action. “We are looking at those pathways,” he said. “I will need to double check with our chemical office on that.” When asked about another chemical, methylene chloride, Wheeler said the agency was moving toward banning it but would not give a timeframe for its decision.

Wheeler echoed his predecessor’s support of the coal industry, another issue close to Trump’s base. The EPA has been the centerpiece of the administration’s multiagency efforts to prop up the struggling industry. “I don’t believe it’s the EPA’s job to pick winners or losers,” he said. “It’s our responsibility to enact the laws Congress passes.” Pruitt gave nearly the same answer when grilled by senators during his confirmation hearing last year.

"We're trying hard to be straight down the road" on the energy sources, @EPAAWheeler tells Congress today. He said he recently visited a solar farm in MA and a fracking site in PA.

Inhofe and current Chairman John Barrasso (R-WY) lavished praise on Wheeler during Wednesday’s hearing and called on Trump to nominate Wheeler formally as Pruitt’s successor. “As acting administrator, Mr. Wheeler has emphasized transparency, while implementing policies that protect the environment and allow America’s economy to grow,” Barrasso said in his opening statement.

Wheeler has granted more interviews to mainstream news outlets than Pruitt did and, last week, urged EPA staffers to “strive for accuracy and integrity” in their communication with reporters. He said the agency recently resolved a 700-case backlog of Freedom of Information Act requests and is looking to hire two additional staffers to deal with a 415% increase in FOIA requests.

In his responses on policy topics, Wheeler expressed his commitment to furthering Trump’s agenda “post haste” and emphasized that agency officials need “to speak with one voice” to provide certainty for states and federal employees.

@EPAAWheeler tells senators that Trump asked him to "clean up the air, clean up the water and provide regulatory relief" for industry. "I believe we can accomplish all three at the same time … We haven’t slowed down, and we haven’t missed a step," he says.

As expected, he parried complaints about the agency’s decision to exempt small oil refiners from the Renewable Fuel Standard and reiterated the administration’s recent plan to challenge California’s fuel efficiency standard. The EPA is expected to release a codified proposal later this week that eliminates year-to-year increases for greenhouse gas emission targets, instead setting longer-term goals.

“It’s this administration’s goal to come up with a 50-state solution that does not necessitate pre-empting California,” he said, adding that there are “important goals on highway safety” that need to be met.

Wheeler also dismissed criticism of his decision to meet with former clients from his time as a lobbyist for Faegre Baker Daniels. On June 26, his calendar included a meeting with Darling Ingredients, a former client who had paid Wheeler’s firm “more than $1.4 million over nine years,” according to E&E News. As deputy administrator, he also reportedly met with two firms that had paid his firm over half-a-million dollars. When asked about his commitment to separate himself from issues on which he has lobbied, Wheeler described an incident where he gave a public speech to two trade associations and a client happened to be in the audience. “I can’t control the people that attend a public speech,” he said.

Wheeler also could not control the people who attended a public hearing. Only a few minutes into his opening statement, Wheeler had to stop while Barrasso ordered a group of protesters to be removed from the chamber. They were holding up “Pruitt Puppet” signs with Wheeler’s face on them.