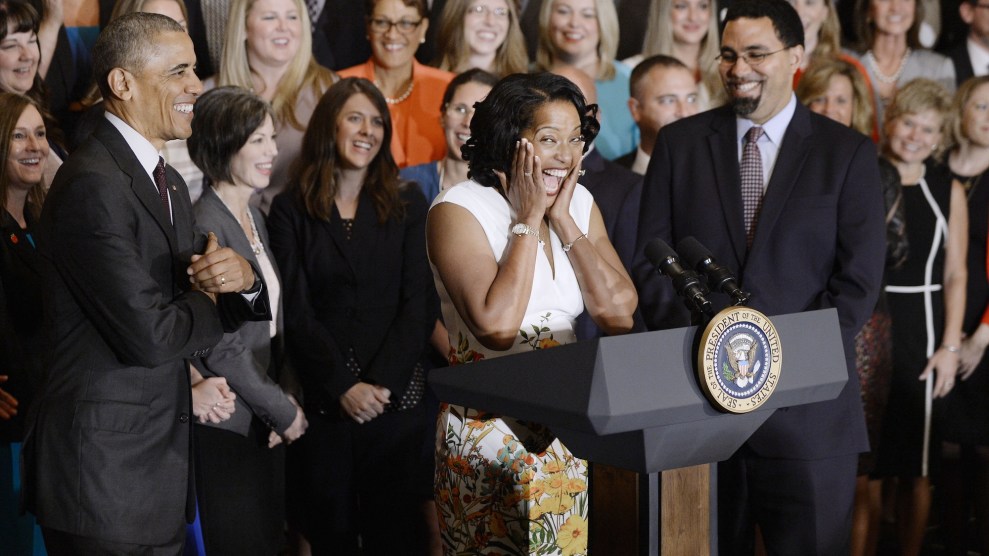 Jahana Hayes reacts as she introduces President Barack Obama during an event at the White House on May 3, 2016.Olivier Douliery/Pool/ABACAPRES.COM via AP

Jahana Hayes—who was named the 2016 Teacher of the Year by President Barack Obama—just won her underdog primary in Connecticut’s 5th Congressional District, bringing her one step closer to becoming the first black Democrat to serve the state in Congress.

Hayes had been teaching history in her hometown of Waterbury, Connecticut, one of the state’s poorest cities, when she received the White House distinction. She was serving as a talent and professional development supervisor for the city’s school district when she entered the congressional race.

A first-time office-seeker, Hayes’ background stands a stark contrast to that of the state’s all-white congressional delegation. In addition to being a teacher, she grew up in public housing with a mother who suffered from addiction. When she was still a teenager, Hayes became a single mother. Now a mother of four, Hayes is married to a police detective.

Should she win in November, she could become New England’s only black member of Congress. (Ayanna Pressley, who is black, is seeking the Democratic nomination for the 7th Congressional District in Massachusetts, which holds primaries next month.)

The incumbent, Rep. Elizabeth Esty (D), declined to run for reelection following reports that she’d continued employing her chief of staff after learning of allegations that he had threatened a former staffer’s life. The unexpected vacancy left national and state Democrats scrambling to find a replacement for the Democratic-leaning district. The Democratic Congressional Campaign Committee asked Mark Barden and Nicole Hockley, two parents who lost children in the 2012 Sandy Hook Elementary School shooting, to run for Esty’s seat. They ultimately declined, opting to dedicate their time to Sandy Hook Promise, the school safety advocacy organization they founded in the wake of their children’s deaths.

Sen. Chris Murphy, who has taken a leading role in the state Democratic Party as he seeks reelection, helped to recruit Hayes into the race in early May. Her opponent, former town first selectman Mary Glassman, had a $75,000 fundraising head start over Hayes and soon thereafter received the state party’s endorsement, a backing that tends to boost candidates in the August primary.

Until Esty’s resignation, Connecticut’s congressional races had been expected to be veritable snoozefests. It’s been 10 years since a Republican has represented Connecticut in Congress, and all the incumbents had expected to waltz to reelection. Though President Donald Trump’s relative success with white, blue-collar voters in the state’s 2nd and 5th districts had encouraged Republicans to list both seats as targets early last year, the party later dropped them.

Should Hayes win the general election, she’ll be the third member of Congress to represent Newtown following the 2012 massacre. On Sunday, she attended the March for Our Lives student rally in Newtown, where she mingled with young activists seeking to curb gun violence. She told Mother Jones that, as a teacher at a different Connecticut school, the Newtown shooting impacted her in a deeply personal way. “I remember students just trying to filter through all of this information that they were getting,” she recalls of her students that day. “As their teacher standing in front of the room, [I was] trying just to keep them calm, to not ignite any hysteria.”

Hayes says she was motivated to run in part by Congress’ failure to address school violence. “It’s the shame of this nation and the shame of this state that we’re still having these conversations,” she says, adding that she’d like to bring the gun laws that Connecticut has passed—like universal background checks—to the federal level.