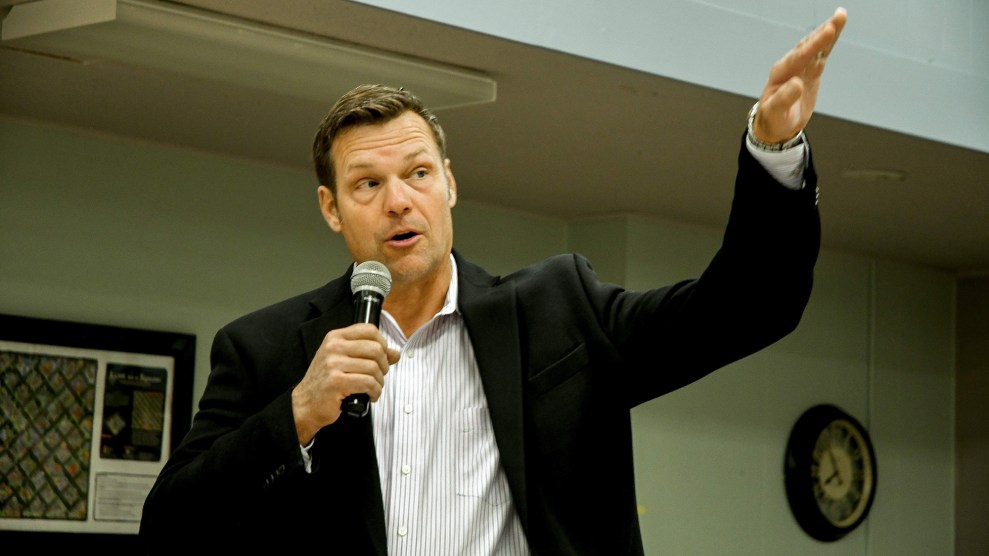 Nearly a week later, last Tuesday’s Republican gubernatorial primary in Kansas is no closer to resolution. Just 110 votes separate Secretary of State Kris Kobach and incumbent Gov. Jeff Colyer, as of Monday morning. And as county election officials begin the process of counting—or casting aside—mail-in and provisional ballots, the two camps can’t even agree on the basic question of whose votes should be counted.

On Friday, Kobach officially pulled back from oversight of the election after Colyer called on him to recuse himself and alleged he was making vote-counting decisions that would benefit his candidacy. In his place, Kobach appointed his top deputy, Eric Rucker, a political hire who Colyer’s campaign said was too close to Kobach to erase the conflict of interest. Now Rucker and Colyer appear at odds over which provisional ballots to count.

Most Kansas county canvassing boards began meeting on Monday to decide what to do with their provisional ballots. On Sunday night, Rucker instructed them in an email to throw out provisional ballots cast by unaffiliated voters. “[T]here has been considerable public discussion regarding whether unaffiliated voters can participate in Kansas party primary elections,” Rucker wrote, according to the Kansas City Star, adding, “If an unaffiliated voter does not complete a party affiliation document, that voter is not entitled to vote at a party primary election.”

It’s unclear how many of the approximately 9,000 provisional ballots were cast for either Kobach or Colyer, in a race with multiple candidates for both parties’ gubernatorial nominations. But the pool of provisional ballots cast by unaffiliated voters may give a critical boost to Colyer, who ran on a more moderate platform than the secretary of state best known for pushing extreme anti-immigrant measures and vote-suppressing policies on a national level.

The question of whether to count these provisional ballots may end up in court. Both sides have cited legal arguments on how unaffiliated voters’ ballots should be handled. Last week, Colyer hired a former US attorney in what appears to be preparation for a legal battle.

Provisional ballots aren’t the only contested terrain. Mail-in ballots present another boondoggle for local officials. Kobach’s office issued instructions to county officials last week not to count mail-in ballots that do not have a postmark proving that they were mailed by 7 p.m. on election day. A Colyer spokesman took issue with that move, arguing to the Star that “receiving a ballot on Wednesday or Thursday by the Post Office is a clear indication from the Post Office that it was mailed on Tuesday or earlier.” Colyer’s campaign also alleged that the secretary of state’s office advised local officials to discard mail-in ballots with smudged postmarks. Brian Caskey, Kobach’s director of elections, denied that Kobach had made that request, but he indicated that if there is no date on a mail-in ballot, it should not be counted. This is the first major election cycle in which Kansas law requires mail-in ballots to specify when they were sent.

In Wyandotte County, Election Commissioner Bruce Newby discarded three mail-in ballots that arrived the day after the election but had no postmark. “We can’t count those,” Newby told reporters on Friday as they observed the county’s process for sorting its remaining ballots. “The thing that really ticks us off is that for all intents and purposes, it’s the Postal Service that’s disenfranchised that voter. And shame on them.”

The vote tally is likely to change by the middle of the week, when many counties make their provisional vote tallies official. Others counties’ canvass boards will not meet until Thursday. The state’s deadline to certify the final results is August 31, but a recount or lawsuit could push a final tally even later.