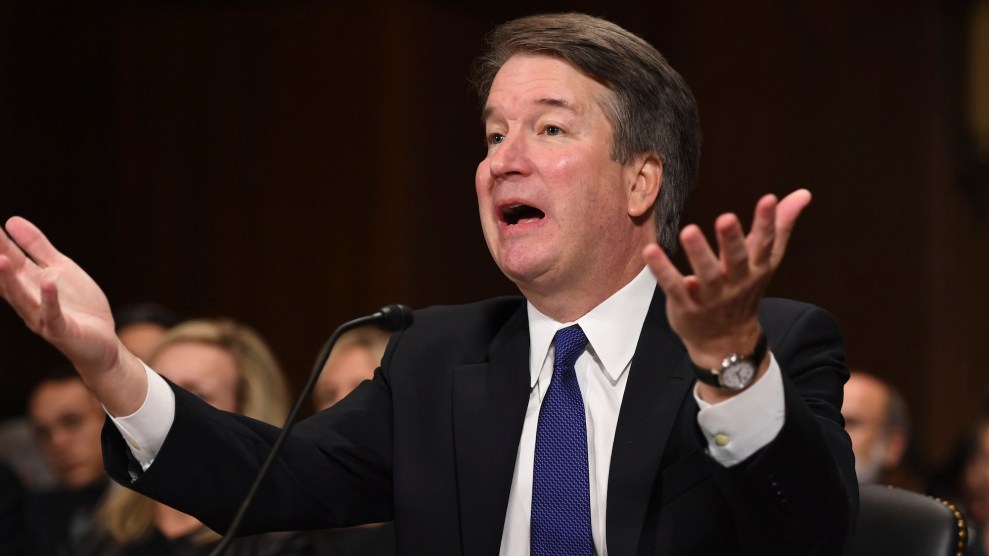 When Brett Kavanaugh was first nominated to a seat on the DC Circuit Court of Appeals in 2003, Democrats were outraged and expressed concern he was too partisan a figure to take a lifetime appointment on an important federal appellate court. Kavanaugh, at the time the staff secretary for President George W. Bush, had worked in the independent counsel’s office investigating the Whitewater land deal under Ken Starr, and co-authored the famous Starr report about President Bill Clinton’s relationship with intern Monica Lewinsky. As part of Starr’s probe of the Clintons, Kavanaugh re-opened the investigation into the death of deputy White House counsel Vince Foster, and spent millions in taxpayer money to investigate wild conspiracy theories suggesting Foster had been murdered. It took Republicans three years to get Kavanaugh confirmed to the DC Circuit.

After 12 years as a federal judge, Kavanaugh may have finally proven his early critics right. During his testimony Thursday, in which he sought to defend himself against allegations he’d sexually assaulted Christine Blasey Ford when the two were teenagers, Kavanaugh launched into a highly partisan speech that was shockingly political for a Supreme Court nominee. He attacked Democrats on the Senate Judiciary Committee, saying, “The behavior of several of the Democratic members of this committee at my hearing a few weeks ago was an embarrassment,” and then suggesting the sexual assault allegations against him from three different women were part of a vast left-wing conspiracy.

This whole two-week effort has been a calculated and orchestrated political hit fueled with apparent pent-up anger about President Trump and the 2016 election, fear that has been unfairly stoked about my judicial record, revenge on behalf of the Clintons, and millions of dollars and money from outside left-wing opposition groups. This is a circus.

His anger, combined with his political attacks, prompted pundits and lawyers to question whether Kavanaugh’s partisan outburst has demonstrated he lacks the judicial temperament to serve on the federal bench, much less the nation’s highest court, regardless of whether the sexual assault allegations against him are true.

It's reasonable to ask how does #Kavanaugh continue serving as a federal judge, much less on #SCOTUS after delivering such an openly partisan attack and identifying so unequivocally as an opponent of the Dem Party? He has validated those who see him as a GOP operative in a robe

To be clear: Lashing out is reasonable. Anger is reasonable. (Whether it's effective is another story). But thoroughly partisan language and conspiracy-mongering just isn't appropriate for someone in his current job, let alone someone who wants to be on the Supreme Court.

Judicial temperament is an ill-defined term, but it’s one presidents are supposed to consider when appointing judges, as well as Supreme Court justices. The American Bar Association, which evaluates candidates for both the federal bench and the Supreme Court, considers a nominee’s “compassion, decisiveness, open-mindedness, courtesy, patience, freedom from bias and commitment to equal justice under the law.” Another legal writer explains, “Judicial temperament, at its best, is a form of restraint that appears as an even-handedness of vision, a thorough-going fairness that eschews anger in favor of reason and clings to respect of all parties as an essential ingredient for the operation of justice.”

Kavanaugh’s performance Thursday comes dangerously close to violating those judicial norms. “The absence of judicial temperament and his unrestrained combativeness toward the Democrats in his opening statement and in his answers to their questions is stunning and entirely counterproductive,” says legal ethics expert Stephen Gillers, a law professor at New York University. “He showed great disrespect to the Democrats in his answers and failures to answer. He spoke over them. Their questions did not invite any of this.”

Still, Gillers doesn’t think Kavanaugh’s testimony rises to the level of something that might result in a successful ethics complaint against him. “I think context matters,” he says. “This is, at bottom, a political process, and he’s in the middle of it. Strategically, it was a foolish way to proceed, but probably aimed at satisfying the president. But an ethics complaint would go nowhere.” Judicial ethics expert Charles Geyh, a law professor at Indiana University-Bloomington, says Kavanaugh’s partisan attacks aren’t likely to require him to recuse himself from cases on either the Supreme Court or the DC Circuit unless those attacks are directly relevant to parties before him.

But it’s hard to imagine how Kavanaugh ever recovers from the perception he’s a biased political operative. And Geyh notes his confirmation experience is likely to color his attitude toward his judicial work. “It is hard to imagine he would not feel humiliated and embittered by this experience,” he says.

If Kavanaugh is not confirmed to the Supreme Court, either because he withdraws or because he doesn’t get enough votes in the Senate, the confirmation battle could still shape the rest of his career. The history of past failed nominees shows two different courses they can take. President Ronald Reagan nominated Douglas Ginsburg, also a judge on the DC Circuit, to the court in 1987, but was forced to withdraw his name because Ginsburg had smoked pot in his youth and well into his days as an assistant professor at Harvard. Ginsburg returned to the DC Circuit and served as an appellate judge until 2011. But the man who preceded Ginsburg as a nominee, Robert Bork, another DC Circuit judge, was voted down by the Senate after a similarly bruising confirmation battle. After that bitter partisan fight, Bork left the bench altogether and became a staple of the right-wing legal circuit. He spent much of his later career bashing the left in books and speeches.

After Thursday, it’s not hard to imagine Kavanaugh taking the Bork career path if he fails to get confirmed to the Supreme Court. If he does get confirmed, his attitude might not be all that different.

Listen: Jamilah King hosts a special breaking news edition of the Mother Jones Podcast, with Supreme Court reporter Stephanie Mencimer and Washington DC Bureau Chief David Corn. Everything you need to know about the historic Kavanaugh hearings—and what comes next.