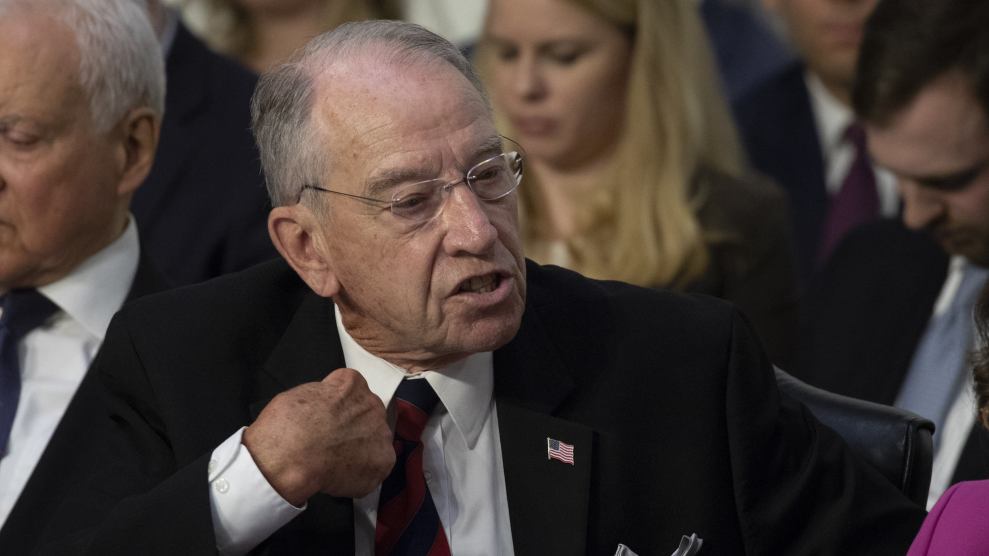 Senate Judiciary Chairman Chuck Grassley during a hearing on the nomination of Judge Brett Kavanaugh to the Supreme Court.Alex Edelman/CNP/ZUMA

Sen. Chuck Grassley (R-Iowa) is blocking the confirmation of a nominee for a top government counterintelligence job in a bid to force the Justice Department to hand over sensitive material on the FBI’s Russian investigation. The Senate Judiciary Committee chairman’s hold is a result of GOP efforts to undercut Special Counsel Robert Mueller, and it has national security ramifications. The veteran intelligence official whose confirmation Grassley is blocking, William Evanina, acting director of the National Counterintelligence and Security Center, is considering leaving the post due to his inability to win Senate confirmation as permanent director, a Senate aide told Mother Jones. Grassley’s decision to block Evanina has irked members of the Senate Intelligence Committee, who hold primary jurisdiction over the nomination.

“He ought to be confirmed soon,” Senate Intelligence Committee Chairman Richard Burr (R-N.C.) told Mother Jones. Burr said he has raised his concerns about the delay directly with Grassley.

While Rep. Devin Nunes has gained notice for his efforts to protect Trump from Mueller’s investigation, Grassley has arguably served as Nunes’ quieter but less inept partner.

Since late 2014, Evanina has served as acting head of the counterintelligence center, which is housed within the Office of the Director of National Intelligence and was created as part of an effort to increase government intelligence sharing in the wake of 9/11. President Donald Trump nominated Evanina, a career government employee who previously led the CIA’s counterespionage efforts, as permanent head of the center in February. The Intelligence Committee unanimously approved the nomination in May.

But in June, Grassley announced he would halt Evanina’s nomination from moving forward. He cited multiple reasons for his hold, including apparent references to Evanina in text messages between FBI agent Peter Strzok, who was fired by the bureau last month, and Lisa Page, a bureau attorney. The texts gained attention because Strzok, who investigated Hillary Clinton’s use of a private email server and briefly served on Mueller’s team, disparaged Trump in some of the messages. It’s not clear why Grassley found mentions of Evanina notable, but he insisted his committee needed “to more fully understand the meaning of the apparent references to Mr. Evanina” in the texts. The senator said he would block Evanina until he received “further context from him and the Justice Department.”

Evanina satisfied that part of Grassley’s request through a classified letter he sent the senator this summer, Grassley spokesman Taylor Foy said in an email. But Grassley is still holding up the nomination, because he wants information on the origins of the FBI’s investigation into contacts between Trump’s 2016 campaign and Russia. The senator says Deputy Attorney General Rod Rosenstein pledged to give him “equal access to materials DOJ and FBI are providing to the House and Senate Intelligence committees.” But the Office of the Director of National Intelligence, Dan Coats, is barring release of the information to Grassley, “thereby impeding the committee’s oversight work,” Foy said in his email. Until that impasse is resolved, Grassley says he will keep blocking Evanina’s confirmation. According to the senator, his hold “is not intended to question the credentials of Mr. Evanina in any way.”

Grassley’s effort to stall Evanina in order to force the release of information contrasts sharply with his approach to the nomination of Judge Brett Kavanaugh to the Supreme Court. Grassley infuriated Democrats by refusing to request records from Kavanaugh’s time as staff secretary in the George W. Bush White House, and he brushed aside their concerns when the Trump administration blocked the release of 100,000 pages of records concerning Kavanaugh’s White House tenure.

Grassley’s hold highlights ongoing GOP efforts to attack the FBI’s Russia investigation by casting doubt on its origins. While House Intelligence Committee chairman Rep. Devin Nunes (R-Calif.) has gained notice for his efforts to protect Trump from Mueller’s investigation, Grassley, who relies on a staff known for being aggressive ideologues, has arguably served as Nunes’ quieter but less inept partner, bombarding the Justice Department and other agencies with letters and document requests for information concerning conservative media hobbyhorses, such as the Strzok texts, the Uranium One deal, and opposition research work of Fusion GPS.

The Iowa senator’s continued objection to Evanina results from a bid to obtain the same information, including details on confidential sources, that Nunes controversially subpoenaed from the Justice Department earlier this year and which has been the subject of months of conflict between the Justice Department and House Republicans.

Grassley’s request would require the Department of Justice to “reveal the names of multiple individuals whose identifies should not be public for safety reasons,” a Senate Democratic aide said. “That is why they are being withheld from a committee that does not have jurisdiction.”

Evanina, frustrated by the delay, is considering private-sector jobs, the staffer noted. “Grassley is kind of hobbling our counterintelligence resources,” the aide added.

Dean Boyd, a spokesman for the counterintelligence center, declined to comment on Evanina’s potential departure. But he said Evanina’s nomination should move forward. “We understand that no member of the Senate has any objections that are specific to Mr. Evanina and Senator Grassley’s concerns about the nomination have been fully addressed,” he said. “We eagerly look forward to working with the Senate to advance Mr. Evanina’s nomination.”

Grassley’s tactics have angered Senate Intelligence Committee members from both parties who say the Iowa Republican’s hold offers an example of how attacks by Trump and his congressional allies on the Justice Department and intelligence agencies may harm national security.

“From brazen Russian espionage, to Chinese IP theft, to insider threats, our country is facing an enormous number of thorny and complex counterintelligence challenges,” Sen. Mark Warner (D-VA), the top Democrat on the committee, said in a statement. “We need a Senate confirmed leader to head our nation’s counterintelligence strategy. Bill Evanina should be confirmed without further delay.”

Intelligence committee members Sen. Marco Rubio (R-Fla.) and Sen. James Lankford (R-Okla.) said that even leaving the center with an acting, rather than Senate-confirmed, director leaves the office less effective. “I’ve seen the impact that not having someone permanently there can have,” Rubio said.

Sen. Susan Collins (R-Maine) said she was concerned that Evanina’s nomination is blocked. “He’s well-qualified for the position,” she told Mother Jones. “So I don’t understand why it’s being held up.”