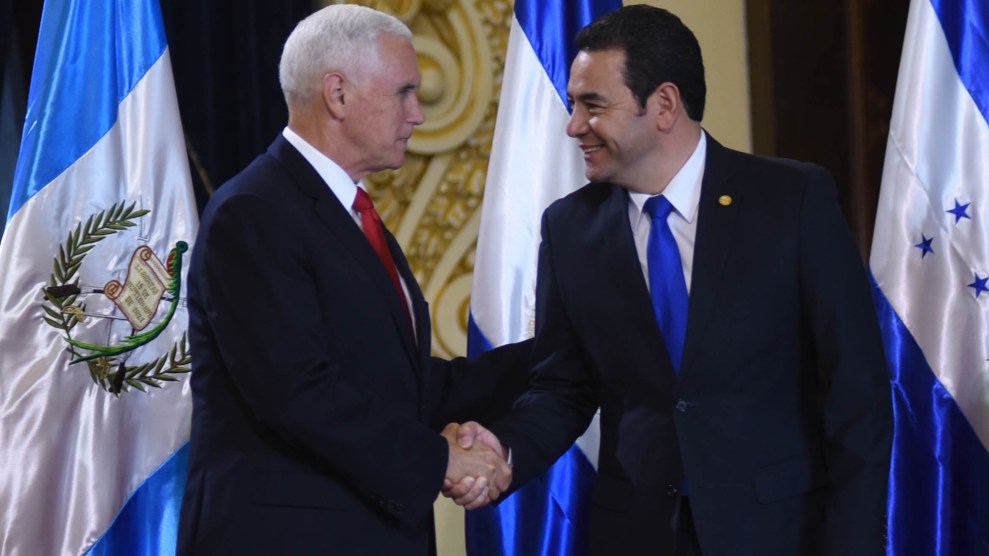 The Guatemalan government has blocked the head of a widely respected anti-corruption body from reentering the country. The move this week follows unsubstantiated allegations from Republican lawmakers about Russian influence over the International Commission Against Impunity in Guatemala, or CICIG, and it has prompted an unusually quiet response from the US government.

Guatemalan President Jimmy Morales’ decision to block CICIG director Iván Velásquez from returning to Guatemala is widely seen as an attempt to obstruct the commission’s probe into alleged wrongdoing by Morales and his family. CICIG has accused Morales of accepting about $1 million in illegal campaign contributions and is trying to strip him of his political immunity. CICIG and Guatemalan prosecutors have also pursued fraud charges against Morales’ son and brother. Morales, who rose to prominence as a comedian, ran on the slogan “Neither corrupt nor a thief.”

Last Friday, Morales—flanked by members of the military and police—said he would not renew CICIG’s mandate after it expires in September 2019 and accused the body of “sowing judicial terror in Guatemala.” Guatemalan military-grade trucks were spotted outside CICIG’s office and the embassies of the United States and other countries shortly before his speech.

Morales wrote last week in a letter to UN Secretary-General António Guterres that CICIG will have to transfer its responsibilities to Guatemalan state institutions. On Tuesday, the Guatemalan government announced it would prevent Velásquez from returning to the country following a trip to the United States, calling Velásquez a threat to order and public security in Guatemala. Guterres said in a statement that he has asked Velásquez to continue running CICIG “until there is more clarity on the situation.” He said CICIG and Velásquez “play a pivotal role in the fight against impunity in Guatemala.”

In June 2017, Vice President Mike Pence emphasized CICIG’s importance and “acknowledged President Morales’ personal dedication” to fighting corruption during a meeting between the two leaders, according to a White House press release. But Morales’ attacks on CICIG have not provoked much outcry from the United States. After Morales announced he would not renew CICIG’s mandate, the US embassy in Guatemala called CICIG “an effective and important partner in fighting impunity” and said the United States will “continue to support Guatemala’s fight against corruption and impunity.” The statement did not directly criticize Morales, whom the Trump administration sees as an ally in the drug war and a strong supporter of Israel. (In May, Guatemala was the first nation to follow the US lead in moving its Israeli embassy to Jerusalem.)

The United States did not join a statement released by Canada and European nations on Wednesday that criticized the decision to block Velásquez from returning to Guatemala. Secretary of State Mike Pompeo called Morales on Thursday and discussed the importance of working with CICIG, according to State Department spokeswoman Heather Nauert. Pompeo also expressed “continued support” for a “reformed CICIG,” but it is unclear what that means.

The US Administration should condition assistance on CICIG’s continued operation.

CICIG is highly popular among Guatemalans and international anti-corruption advocates. As Mother Jones reported in May:

[CICIG] was created in 2007 to help Guatemalan prosecutors take down criminal organizations that coopted government institutions after a 1996 peace deal ended 36 years of civil war. The commission has been seen as a rare bright spot in a region plagued by endemic corruption and has traditionally had broad bipartisan support in Congress. The United States provides about half of CICIG’s funding. [The Washington Office on Latin America] concluded in a June 2015 report that CICIG has “achieved transcendental results” and recommended that Honduras and El Salvador consider creating similar commissions.

But the body has come under scrutiny from Republican legislators in recent months who argue that a Russian family living in Guatemala was unfairly targeted by CICIG for buying fake passports. In May, Sen. Marco Rubio (R-Fla.) temporarily blocked US funding for CICIG due to concerns about Russian influence over the body. Latin America experts said there was no evidence to support claims that CICIG is a Kremlin tool:

Jo-Marie Burt, a professor of Latin American studies at George Mason University and a senior fellow at the Washington Office on Latin America, told the Guardian, “Rubio changed policy after hearing one side…This is a classic fake news scenario.” Adriana Beltrán, a Guatemala expert at WOLA, tells Mother Jones she’s seen no evidence of collusion between Russia and the commission. Eric Olson, the deputy director of the Wilson Center’s Latin American Program, is similarly skeptical. To satisfy critics like Rubio, CICIG’s defenders would have to prove that Russia did not corrupt the commission—a task Olson compares to proving that the moon isn’t “made of Swiss cheese.”

Rubio called Morales a “great friend” of the United States in February and called him “mi amigo” in a Spanish tweet on Thursday, the day before Morales announced he was phasing out CICIG. Rubio’s office has not commented on Morales’ recent actions against CICIG. Reps. Eliot Engel (D-N.Y.) and Albio Sires (D-N.J.), who serve on the House Foreign Affairs Committee, said in a statement that Congress must do everything in its power to “appropriately adjust US assistance to the Guatemalan government” if Morales doesn’t allow Velásquez back in. Engel told Mother Jones in a statement in May that the “only winners from attacks on CICIG are the country’s most corrupt.” He added, “We cannot allow Russia to be used as a bogeyman to damage years of progress in the fight against corruption in Guatemala.”

The Washington Office on Latin America noted on Wednesday that the trucks spotted outside the CICIG office and embassies on Friday were donated by the US Defense Department to fight corruption and drug trafficking. Pompeo singled out those efforts on Saturday.

“Our relationship with Guatemala is important,” he wrote on Twitter. “We greatly appreciate Guatemala’s efforts in counternarcotics and security.” He did not mention Morales or CICIG. Sen. Patrick Leahy (D-Vt.) called Pompeo’s tweet “bizarre,” saying in a statement that it was “a bit like being told that the courthouse is on fire and responding that the stock market is up.”