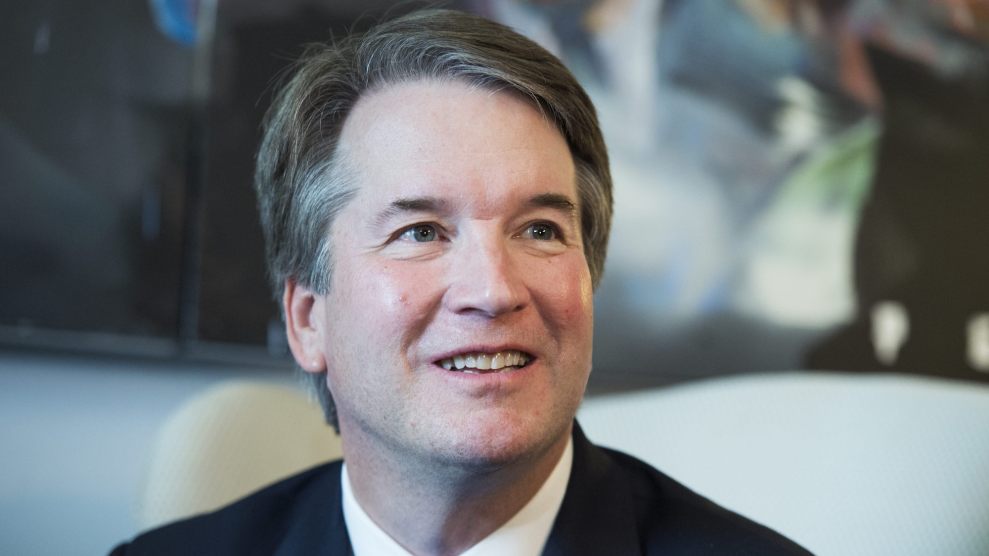 Democrats worry Kavanaugh will side with the First Amendment rights of companies over those of consumers. Tom Williams/CQ Roll Call/Newscom via ZUMA

Fight disinformation: Sign up for the free Mother Jones Daily newsletter and follow the news that matters.
Next week, Democrats will question Supreme Court nominee Brett Kavanaugh during confirmation hearings held by the Senate Judiciary committee, and Kavanaugh’s potential influence on the future of net neutrality will almost certainly be a topic of discussion.
“Make no mistake Judge Kavanaugh would cripple net neutrality… for decades to come,” Sen. Richard Blumenthal (D-N.Y.) told reporters on a press call last Tuesday. “Even if Congress decided to act on the subject of net neutrality, Judge Kavanaugh would still view it in violation of the Constitution.”
Kavanaugh’ record on net neutrality goes back to 2016, when he was a judge in the US Court of Appeals for the DC Circuit. At that time, the court ruled to uphold the Federal Communications Commission’s 2015 Open Internet Order, which instated net neutrality regulations prohibiting internet service providers from throttling internet speed based on content.  In the case United States Telecom Association v. Federal Communications Commission, the court rejected the plaintiffs’ arguments that ISPs were immune from the common carrier laws that phone companies are subject to in order to prevent content discrimination. A petition to appeal the decision was denied by the same court in May 2017. In his dissent from the majority, Kavanaugh argued that “President Obama pressured the FCC to do it,” and that such presidential interference nullified the order.  His main argument rested on two points: that the FCC lacked authorization from Congress to regulate net neutrality and that to do so would violate the First Amendment rights of internet service providers.
“The legal analysis is straightforward: If the Supreme Court’s major rules doctrine means what it says, then the net neutrality rule is unlawful because Congress has not clearly authorized the FCC to issue this major rule,” Kavanaugh writes. “Net neutrality rule is unlawful because the rule impermissibly infringes on the Internet service providers’ editorial discretion.”
But the majority disagreed, stating “both lines of argument are misconceived.” The majority cited the 6-3 vote in the 2005 case National Cable and Telecommunications Association v. Brand X Internet Services,  in which the Supreme Court upheld the authority of the FCC to interpret the Telecommunications Act of 1996, which was designed to reduce regulation of the communications market to increase competition and make room for more internet providers. Kavanaugh’s opinion, which claims that the agency needs specific direction from Congress to interpret the act, goes against the court’s historic deference to the Chevron principle, which established that courts should defer to the expertise of administrative agencies. The majority in the DC Circuit argued that “no Supreme Court decision supports the counterintuitive notion that the First Amendment entitles an ISP to engage in the kind of conduct barred by the net neutrality rule.”
“There’s never been a First Amendment problem here because…ISPs are holding themselves out as offering a public service, promising to connect you to all parts of the internet,” says Tejas Narechania, an assistant professor of law at UC Berkeley who specializes in telecommunications regulation. He says that in contrast to cable companies, which offer a limited selection of channels, ISPs do not claim to curate content and therefore aren’t immune from laws requiring them to treat all content equally.
Democratic lawmakers involved with the original 1996 Telecommunications Act also disagree with Kavanaugh’s interpretation. On Tuesday, 27 senators and 76 House members filed an amicus brief in support of Mozilla Corporation v. FCC, et al, a petition brought by the internet software company asking the court to vacate the FCC’s net neutrality regulation rollback.  The amicus brief was meant to guide the court to the 1996 Telecommunications Act, and several nonprofits and internet rights organizations have filed similar amicus briefs in support of Mozilla’s petition.
“A broadband carrier, like any other common carrier, is obligated to provide nondiscriminatory and equal access to its consumers. The courts have recognized that a broadband provider is merely facilitating the transmission of others’ speech and is not engaged in speech of its own,” Sen. Ed Markey (D-Mass.) told reporters on a press call last Tuesday. “Just because someone uses a soapbox doesn’t mean the soapbox has First Amendment rights.”
In September 2017, AT&T, along with United States Telecom Association and CenturyLink Inc., filed appeals asking the Supreme Court to vacate the decision in United States Telecom Association v. Federal Communications Commission, but the court has sat on the case for nearly a year.  In August, the Department of Justice and the FCC requested that the Court refer the decision back to the DC Circuit Court of Appeals to vacate its previous decision on the grounds that the decision no longer had legal standing based on the FCC’s repeal of its own policy.  In December 2017, Trump’s FCC voted 3-2 to repeal the Obama-era open internet rules. The decision went into effect in June but is being legally challenged in over a dozen states.

Narechania, who also clerked for Justice Stephen G. Breyer,  said it would be impossible to tell how the rest of the Supreme Court Justices would rule if it did decide to take up the case.

In May, the Senate voted 52-47 on a joint resolution to restore net neutrality using Congressional Review. But Democratic lawmakers still see Kavanaugh’s views as a threat, especially as the effort to push through legislation to reinstate net neutrality regulation struggles to gain traction in the House. Even if a midterm swing cleared a path for the bill, Kavanaugh could pose a threat in the future.

“I think the answer is yes—to the extent that Judge Kavanaugh thinks that imposing this obligation on ISP violates the First Amendment, that would limit the ability of Congress to update the Telecommunications Act to give the FCC the ability to regulate net neutrality,” says Narechania.