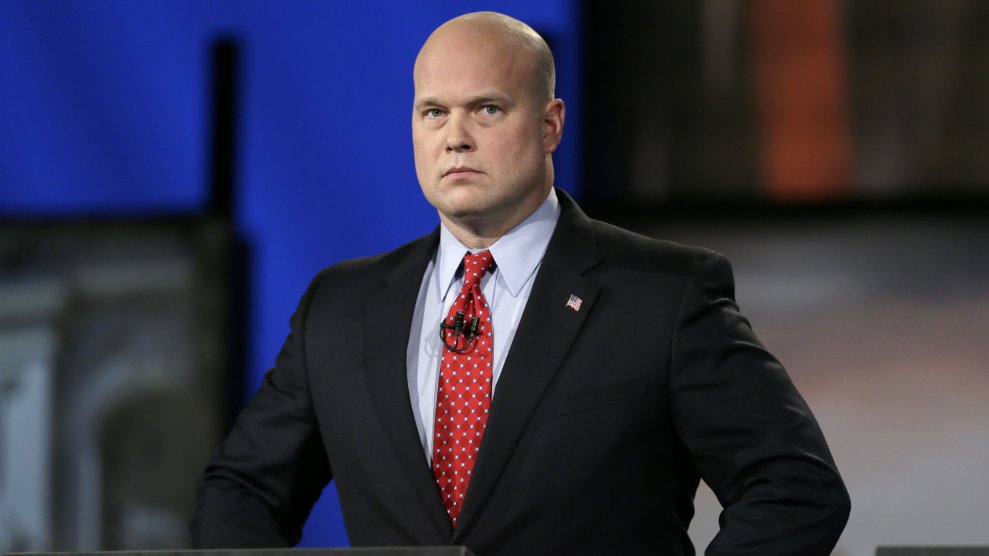 Matthew Whitaker, chief of staff to Attorney General Jeff Sessions and a former US attorney for the Southern District of Iowa, is expected to succeed Rosenstein as the Justice Department’s No. 2, the New York Times reported Monday. Rosenstein, who oversees the Russia investigation following Sessions’ recusal, was summoned to the White House and is expected to resign or be fired, several outlets have reported.

“If [Mueller] were to continue to investigate the financial relationships without a broadened scope in his appointment, then this would raise serious concerns that the special counsel’s investigation was a mere witch hunt,” Whitaker wrote on CNN.com last August. Before entering government as Sessions’ chief of staff last September, Whitaker was a legal commentator for CNN and appeared several times on network programs to opine on Mueller’s probe and the investigation into Trump’s former campaign chairman Paul Manafort.

In an appearance on Don Lemon’s show last summer, Whitaker predicted Trump would put pressure on Rosenstein and “try to get Rod to maybe even cut the budget of Bob Mueller.”

“I think what ultimately the president is going to start doing is putting pressure on Rod Rosenstein, who is in charge of this investigation,” Whitaker said, “and really try to get Rod to maybe even cut the budget of Bob Mueller and do something a little more stage crafty than the blunt instrument of firing the attorney general and trying to replace him.”

A month later, Whitaker wrote in his op-ed for CNN that any investigation into Trump’s personal finances would constitute “a red line” that Mueller is “dangerously close to crossing.”

“It does not take a lawyer or even a former federal prosecutor like myself to conclude that investigating Donald Trump’s finances or his family’s finances falls completely outside of the realm of his 2016 campaign,” he wrote. “That goes beyond the scope of the appointment of the special counsel.”

Whitaker went on to urge Rosenstein “to order Mueller to limit the scope of his investigation to the four corners of the order appointing him special counsel.”

After news broke that Trump’s son, Donald Jr., and senior campaign officials had attended a meeting in Trump Tower with a Russian lawyer offering dirt on Hillary Clinton, Whitaker said on CNN that “you would always take the meeting” and “you certainly want to have any advantage, any legal advantage you can” as a political candidate.

As deputy attorney general, Whitaker would be in a position to influence the course of Mueller’s investigation. Though Mueller currently reports to Rosenstein, the New York Times reported Monday that Noel Francisco, the US solicitor general and third in line at the Justice Department, would oversee the Russia probe directly if Rosenstein is ousted.

On August 6, 2017, Whitaker retweeted a Philadelphia Inquirer article titled “Note to Trump’s lawyer: Do not cooperate with Mueller lynch mob.” Whitaker added, “Worth a read.”

Worth a read. "Note to Trump's lawyer: Do not cooperate with Mueller lynch mob" https://t.co/a1YY9H94Ma via @phillydotcom

Published three months after Mueller was appointed as special counsel, the article by ex-federal prosecutor George Parry urged Trump’s lawyers not to cooperate with the special counsel’s investigation. “The absolute last thing someone in your client’s position should do is cooperate with Mueller,” Parry wrote. “For the target of a grand jury investigation, cooperation is a sucker play guaranteed to result in disaster. If your client is a so-called person of interest or potential target, never, ever allow him to testify before the grand jury. Same thing for giving a statement to an investigator. It’s a trap, plain and simple.”

But during a CNN appearance last summer, Whitaker praised Mueller’s integrity. “There is no honest person that sits in the world of politics, in the world of law, that can find anything wrong with Bob Mueller,” he said, adding that if “something’s wrong with Bob Mueller,” then “our republic is in more trouble than we might imagine.” Whitaker also told the Hill newspaper, “Nobody has a reputation like Bob Mueller,” and he sought to dispel claims that the special counsel would be biased in favor of former FBI Director James Comey. “If you’re assuming his judgment will be skewed because of it, that’s just wrong,” Whitaker said. “He’s a pro.”

Before entering government, Whitaker ran for Senate in Iowa but lost the Republican primary to Joni Ernst. He has also served as executive director of the Foundation for Accountability and Trust, a conservative nonprofit.

Listen to our journalists explain all the twists and turns of Election Day 2018, and what comes next for America, on this special episode of the Mother Jones Podcast: