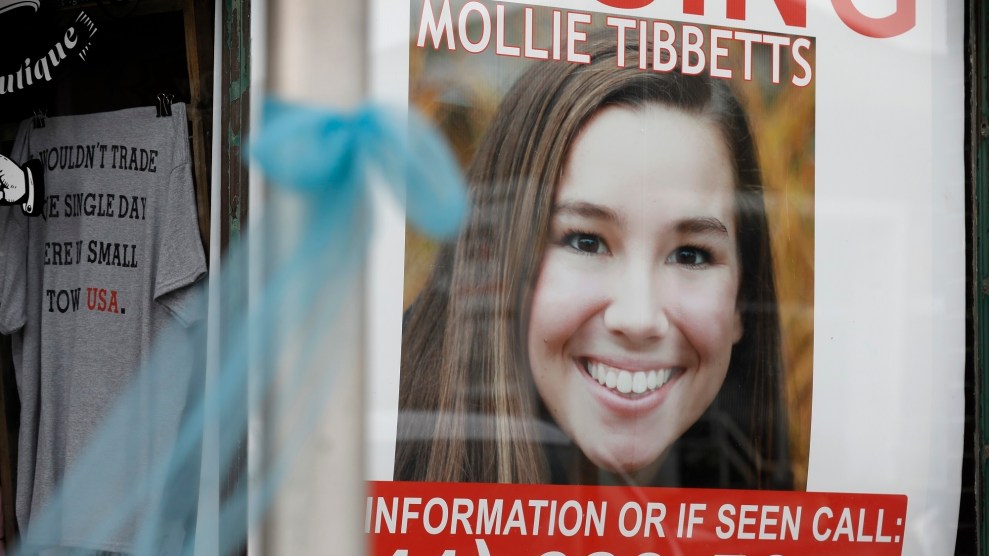 A poster for missing University of Iowa student Mollie Tibbetts hangs in the window of a local business in Iowa. Tibbets was found dead last month. Charlie Neibergall/AP

The father of Mollie Tibbetts is calling on politicians and pundits to stop using his daughter’s death to advance a cause she “vehemently opposed.”

In a column published Saturday by the Des Moines Register, Rob Tibbetts wrote that, while there is room for debate about immigration, “do not appropriate Mollie’s soul in advancing views she believed were profoundly racist.”

The person who is accused of taking Mollie’s life is no more a reflection of the Hispanic community as white supremacists are of all white people. To suggest otherwise is a lie. Justice in my America is blind. This person will receive a fair trial, as it should be. If convicted, he will face the consequences society has set. Beyond that, he deserves no more attention.

To the Hispanic community, my family stands with you and offers its heartfelt apology. That you’ve been beset by the circumstances of Mollie’s death is wrong. We treasure the contribution you bring to the American tapestry in all its color and melody. And yes, we love your food.

Tibbetts, a 20-year-old psychology student at the University of Iowa, disappeared on July 18 after going for a run in her hometown of Brooklyn, Iowa. On July 20, Cristhian Rivera, an undocumented Mexican immigrant, confessed to killing Tibbetts and led police to her body the next day.

President Donald Trump and others on the right quickly seized on Mollie Tibbetts’ death as a way to advance their immigration agenda. One day after her body was found, Trump said that she had been “permanently separated” and used her murder as a justification for building his border wall. On Friday, Donald Trump Jr. blamed Tibbetts’ murder on Democrats and their “radical open-borders agenda” in his own Des Moines Register column.

Make no mistake, Mollie was my daughter and my best friend. At her eulogy, I said Mollie was nobody’s victim. Nor is she a pawn in others’ debate. She may not be able to speak for herself, but I can and will. Please leave us out of your debate. Allow us to grieve in privacy and with dignity. At long last, show some decency. On behalf of my family and Mollie’s memory, I’m imploring you to stop.