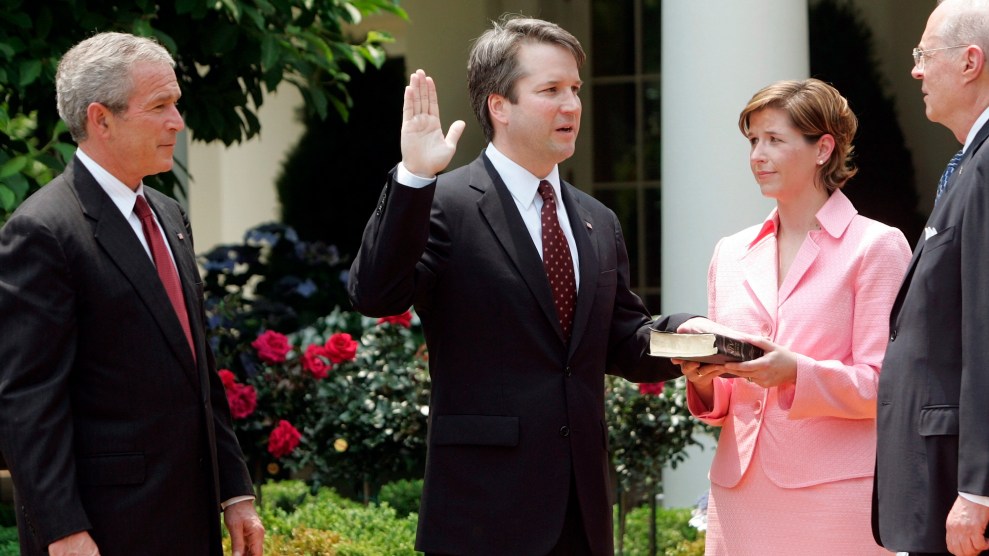 President George W. Bush watches the swearing-in of Brett Kavanaugh as judge for the DC Court of Appeals in 2006.Pablo Martinez Monsivais/AP Photo

Adarand Constructors v. Pena was a landmark 1995 Supreme Court decision. In it, the court took a big swipe at the federal government’s programs to give preferences in contracting to minority companies. The case was brought by a white-owned Colorado Springs company that had been denied a Department of Transportation subcontract, despite coming in with the lowest bid, because the government gave preference to a minority-owned company.

Adarand sued, arguing that it had been unconstitutionally discriminated against. It lost in the lower courts and then appealed to Supreme Court, which overturned the lower courts and required the government to set strict limits on its use of race-based affirmative action programs in contracting. The case went back to the 10th Circuit Court of Appeals to reconsider in light of the new guidelines from the Supreme Court. The 10th Circuit ruled in favor of the Department of Transportation, and in 2001, Adarand asked the high court to revisit the issue, even though by then, the government had radically changed the way it handled minority business contracting to comply with the Supreme Court decision.

Much to the surprise of civil rights leaders—and to the dismay of many of the administration’s conservative allies—the Bush administration took the same position the Clinton administration had and asked the Supreme Court to uphold the Department of Transportation’s minority contracting regulations. In a 2001 email chain with former Attorney General Alberto Gonzales, his deputy Timothy Flanigan, and Noel Francisco (then an associate White House counsel and now President Donald Trump’s solicitor general), Kavanaugh weighed in on the government’s brief in the case. While he made a few suggestions for improving the government’s arguments, it was clear he was skeptical of the government’s affirmative action program, which he predicted the court would strike down. He wrote:

The fundamental problem in this case is that these DOT regulations use a lot of legalisms and disguises to mask what in reality is a naked racial set-aside. I have no doubt that Rehnquist, Scalia, Thomas, and Kennedy will realize as much in short order and rule accordingly…I assume O’Connor will so rule as well, although that is less certain.

Kavanaugh proved to be a bad Supreme Court prognosticator: The court punted on the case altogether, ruling after oral arguments that Adarand’s petition for the court to hear the case had been “improvidently granted.” Essentially, the court found that Adarand was arguing an entirely different case thanks to the changes the government had implemented since 1995, and that as a result, it didn’t have standing to challenge the government’s race-based programs.