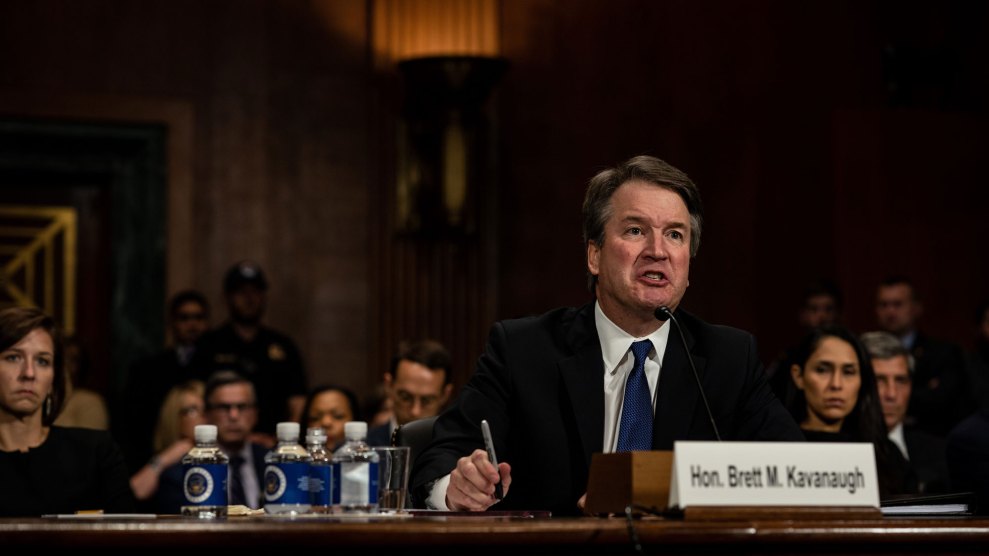 Brett Kavanaugh didn’t give an inch at Thursday’s hearing before the Senate Judiciary Committee. And maybe that was a red flag. Following a compelling, composed, and emotional testimony from Dr. Christine Blasey Ford, who alleges Kavanaugh sexually assaulted her when she was a teenager, Kavanaugh offered a defiant and angry rebuttal. As expected, he denied having assaulted Ford. But he also denied so many other things that have been said about him, on the record, by people who have known him, in rigorously reported accounts over the past two weeks.

Midway through the afternoon session, Sen. Richard Blumenthal (D-Conn.) recited to Kavanaugh a Latin phrase that appears in jury instructions: Falsus in uno, falsus in omnibus. “False in one thing, false in everything,” he translated. Absent additional interviews with third parties (such as Mark Judge, who Ford alleges was also in the room during the assault), the one big thing will almost certainly go unresolved. But on a few key things, central to his own defense of his character, there are clear factual holes in Kavanaugh’s testimony.

One of the more disturbing details to emerge from recent reporting about Kavanaugh is related to a woman named Renate Schroeder Dolphin, who attended a Catholic high school in the DC area. The New York Times reported this week that Kavanaugh and more than a dozen classmates at Georgetown Prep described themselves in their high school yearbook as “Renate Alumni.” The implication of a group whose members had graduated from a specific woman was not lost on Dolphin, who told the Times “the insinuation is horrible, hurtful and simply untrue.”

Kavanaugh’s attorney told the Times the reference was to the fact they had attended one high school event together and kissed afterward. (Dolphin said they never kissed.) At his opening statement Thursday, Kavanaugh drew attention to the story:

One thing in particular we were sad about, one of our good—one of our good female friends who we would admire and went to dances with had her name used on the yearbook page with the term “alumnus.” That yearbook reference was clumsily intended to show affection and that she was one of us. But in this circus, the media has determined the term was related to sex. It was not related to sex. She and I never had any sexual interaction at all. So sorry to her for that yearbook reference. This may sound a bit trivial given all that we are here for, but one thing I want to try to make sure—sure of in the future is my friendship with her. She was and is a great person.

Kavanaugh’s characterization of the graduates club—that it referred strictly to boys who cherished their friendship with her and not those who said they had interactions of a sexual nature with her—appeared to contradict his lawyer’s statement and runs counter to Dolphin’s own understanding.

During his opening statement and again during his testimony, Kavanaugh emphatically insisted the students Ford said were in attendance at the gathering in question have all refuted her allegations—including her good friend at the time, Leland Ingham Keyser. In Kavanaugh’s opening statement, he said:

My two male friends who were allegedly there, who knew me well, have told this committee under penalty of felony that they do not recall any such party and that I never did or would do anything like this. Dr. Ford’s allegation is not merely uncorroborated, it is refuted by the very people she says were there, including by a longtime friend of hers. Refuted.

Kavanaugh and the senators talked a lot about drinking (beer, specifically, a lot of beer). The judge insisted to Sens. Sheldon Whitehouse (D-R.I.) and Amy Klobuchar (D-Minn.), among others, he liked beer and would drink it frequently in high school and college, but that “I did not drink beer to the point of blacking out” and never has. On questioning, he said he had never struggled even a little bit to remember afterward what he’d said or done while drinking.

But as he was reminded during his testimony, that runs counter to what multiple on-the-record acquaintances have said over the past few weeks. His freshman roommate at Yale told the Times that Kavanaugh was “frequently unusually drunk” and would become belligerent as a result. Another classmate, Elizabeth Swisher, told the paper, “I saw him very drunk many times and there is no way he remembers everything about every night.” Asked about Swisher’s comment, Kavanaugh said she never identified any specific incidents in which he might have blacked out, but that’s not a contradiction: The implication from multiple classmates was that Kavanaugh blacking out was simply an unexceptional occurrence.

Kavanaugh’s account of his drinking is also apparently contradicted by a speech he gave at Yale Law School in which he described stumbling out of a bus at 4:45 a.m. after bar-hopping in Boston. The bus had a keg on it. He was asked about the speech Thursday, but characterized it simply as a fun night out with friends.

In addition to the “Renate” reference, the Georgetown Prep yearbook entry includes the question, “Have you boofed yet?” When Sen. Sheldon Whitehouse (D-R.I.) asked him to explain what that meant, Kavanaugh (who had by this point grown increasingly hostile with his Democratic questioners) said it referred to flatulence. “We want to talk about flatulence at age 16 on a yearbook page?” he asked Whitehouse testily. “I’m game.”

Kavanaugh likewise deflected questions about the yearbook’s reference to “Devil’s Triangle,” telling the senators it was a drinking game he played with friends. According to David Enrich, one of the Times reporters who investigated Kavanaugh’s drinking, Kavanaugh’s own classmates say those claims are false:

Based on extensive interviews by me and @katekelly with Kavanaugh's former Georgetown Prep classmates, what he just said about the meanings of "boofed" and "Devil's Triangle" is not true.

Listen: Jamilah King hosts a special breaking news edition of the Mother Jones Podcast, with Supreme Court reporter Stephanie Mencimer and DC Bureau Chief David Corn. Everything you need to know about the historic Kavanaugh hearings—and what comes next.