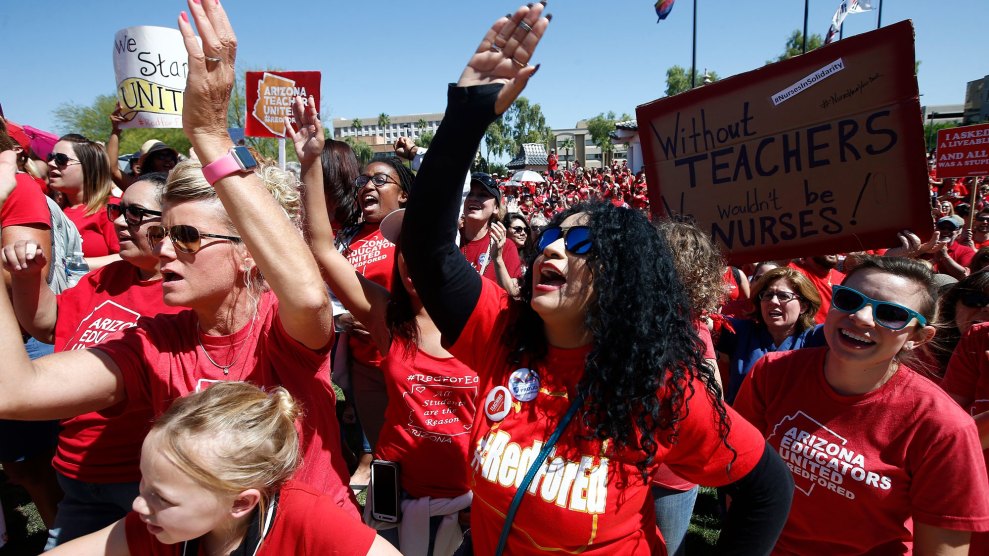 Teachers chant during continued protests at the Arizona Capitol Thursday, May 3, 2018, in Phoenix. Ross D. Franklin/AP

In 2016, newly minted Arizona Teacher of the Year Christine Porter Marsh criss-crossed the state, giving speeches and listening to the concerns of her fellow educators. The Arizona Legislature had been slashing school funding for years—from 2008 through 2015, the education budget saw a bigger drop than anywhere else in the country—and while Marsh had watched her own class sizes grow significantly in her wealthy Scottsdale school district, the teachers she met faced increasingly dire conditions: outdated books, low pay, staff shortages.

A year later, state and local Democratic leaders had started to engineer ways to counter the Republican-led Legislature that had pushed through the harsh education cuts, and they approached Marsh to see if she’d be interested in running for office. Education had been one of the most pressing issues for years among Arizona voters. Local Democrats thought Marsh, with her status as one of the state’s most recognized teachers, had a shot to flip her Republican-held state Senate district, which went for Hillary Clinton by 5 points in 2016. But she wasn’t sure. Marsh, who has worked in the classroom for over 26 years, was just starting a new job at a new school, and she couldn’t imagine teaching and campaigning at the same time as raising her two sons as a single mother. (She has also fostered six kids.)

After just a few weeks, though, Marsh changed her mind. “I realized I wouldn’t be able to look my students in the eyes,” she says, “if I didn’t do everything possible to ensure their future success had as much chance of flourishing as possible.”

Within another year, anger over inadequate school funding would thrust education into the front of political conversations across the country. In February 2018, West Virginia teachers shut down schools to call for raises and rallied outside their state Capitol, the first of a series of protests that would ripple through a half-dozen states. By April, the demonstrations hit Arizona, with crimson-clad educators walking out of class for six days under the banner #RedforEd. Marsh joined her colleagues on the front lines demonstrating outside the state Capitol. “Teachers should not have to run for office. They should not have to go down to the Capitol to advocate for students,” she says.

Marsh now finds herself among a like-minded group of teachers who want to change the system as elected officials. Nationwide, more than 550 current and former educators and school staffers are seeking state office this year, according to the National Education Association, the country’s biggest union. An NEA spokesperson told HuffPost last month that this year was the first time it had tracked such figures, but called the surge of educators running “unprecedented.” They’re even making their way into congressional races, the highest profile of which may be 2016 National Teacher of the Year Jahana Hayes, who would be the first black woman to represent Connecticut in Congress.

In Arizona, Marsh is attempting to unseat moderate Republican Kate Brophy McGee, a former school board president who serves as vice chair of the state’s Senate Education Committee. A first-term senator and former state representative, Brophy McGee has called for increases in school funding, and earlier this year she sponsored legislation that extended Proposition 301, an annual sales tax that will net more than $660 million in school funding over 20 years. But she’s backed by Republican Gov. Doug Ducey, who has championed the expansion of the state’s voucher-like program, as well as charters, while refusing to raise taxes to pay for more school funding. Ducey is facing a reelection challenge from another educator, Arizona State University professor David Garcia.

Marsh views the challenge for Brophy McGee’s seat as a chance for Arizona Democrats to change the conversation in Phoenix. The Democratic Legislative Campaign Committee has identified her race as a “critical flip opportunity,” and Arizona Democrats are hopeful that she can bring them one step closer to winning the three seats necessary to take the state Senate—a chamber Republicans have controlled since 1992. Marsh recently criticized Brophy McGee for calling for more transparency and accountability on charter schools when state Democrats have tried to pass legislation over the years to do just that.

To do that, Marsh will have to capitalize on the momentum of #RedforEd, which she told me has “raised awareness” with voters about teachers’ struggles “to a level [she’s] never really seen in Arizona.” Following the protests, the Red for Ed movement focused its energy on the Invest in Education Act, a statewide ballot initiative that set out to raise taxes on wealthy households and send $690 million each year in classroom funding. Teachers worked throughout the summer to help gather signatures to get it on the ballot, but in late August, the Arizona Supreme Court tossed the initiative off the November ballot because of potentially confusing wording. (For her part, Marsh supported the measure, but also felt conflicted about it, wondering if it could’ve been less divisive by targeting a broader tax base.)

“This race, I say all the time, is bigger than her and it’s bigger than me. It’s about who, metaphorically and literally, holds the gavel.”

Charlie Fisher, the executive director of the Arizona Democratic Legislative Campaign Committee, which is trying to elect Democrats to the Arizona Statehouse, says he hopes the initiative’s removal will inspire voters to turn out. Carrie Pugh, the NEA’s political director, agrees, pointing out that on top of the surge of educators running for office, she’s seeing high levels of engagement from activists and teachers themselves in volunteering to help with campaigns.

Marsh—who has been endorsed by the Arizona Education Association, the union that helped fuel the Red for Ed protests—worked to gather signatures for a separate education-related initiative, Proposition 305. The measure, which appears on the November ballot, asks voters to consider the 2017 expansion of Arizona’s education savings account program, a voucher-like system that allows parents who take their kids out of public schools to get funding to allow them to pay for books or private school tuition.

The experience led to Marsh’s first taste of attack ads. In August 2017, the American Federation for Children, a pro-voucher nonprofit formerly run by Education Secretary Betsy DeVos, ran robocalls in Marsh’s district, accusing her of falsifying petitions for Proposition 305. Marsh, who was later cleared of wrongdoing, told me she now sees the targeting as a “badge of honor.”

Even still, the digital attacks haven’t stopped. A website funded by Senate Victory PAC, which promotes Arizona Senate Republicans, is called MarshIsWrong.com and criticizes Marsh for being “too radical” to serve in the state Senate, for supporting tax increases, and for wanting to repeal the state’s right-to-work policies.

After a summer of door-knocking, phone-calling, and canvassing with her campaign staff, which includes some fellow educators, Marsh says she’s now spending her workdays grading papers and her off hours at the office or local forums. If she gets elected, Marsh says, she would also keep her job as a teacher.

“I really love my job,” Marsh says. “It’s important that we have more legislators who are part of the working world. A lot of them are not. I’m a single mother helping put a son through college, and I have to work. There’s no option.”