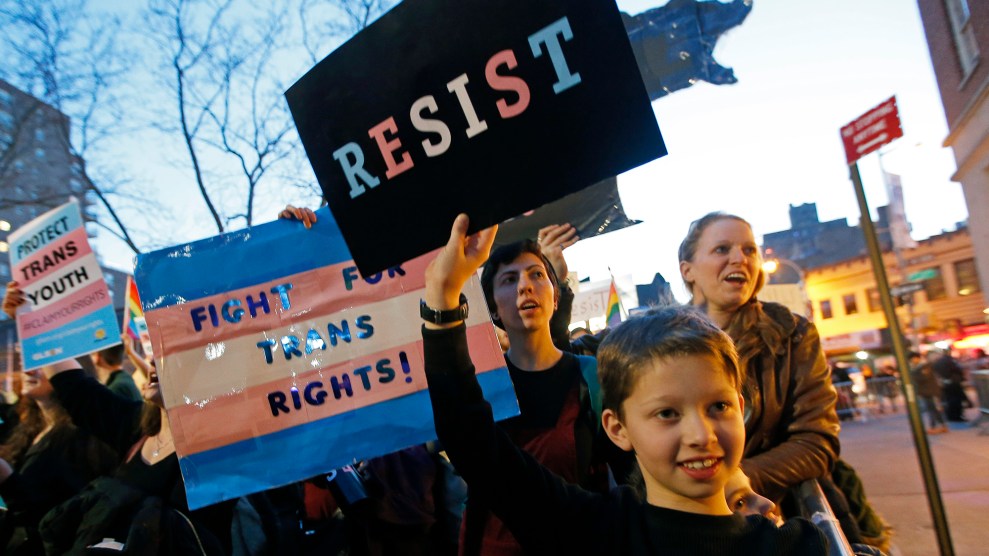 Tal Moskowitz, a transgender eight-year-old, at a rally for transgender youth at the Stonewall National Monument in New York in February 2017Kathy Willens/AP

The Trump administration is taking aim at transgender Americans again: Over the weekend, a leaked memo revealed that for certain legal purposes, the Department of Health and Human Services wants federal agencies to narrowly construe the term “sex” as one of two options—male or female—and treat it as an unchangeable biological condition based on a person’s genitals at birth. The proposal would attempt to exclude transgender, intersex, and other gender-nonconforming people from a host of civil rights protections.

The leaked memo, reported by the New York Times, is the latest slap in the face for the LGBT community under Trump, whose administration has already rolled back Obama-era protections for transgender people in schools, hospitals, the military, and prisons. And it may be no coincidence that it came to light just ahead of the midterm elections—transgender rights advocates say the president may be trying to energize his conservative base.

HHS wants to redefine the concept of gender for the purposes of enforcing two federal laws: Title IX, which prohibits sex discrimination in public schools, and the Affordable Care Act (known as Obamacare), which prohibits sex discrimination by insurance companies and medical care providers. But how easy would it be for the government to follow through with the proposal in the memo? And if it became policy, what exactly would change?

To find out, I talked separately with Shannon Minter, a transgender attorney at the National Center for Lesbian Rights, and Diana Flynn, another transgender attorney who was a top official in the Justice Department for more than three decades before leaving the post a year into the Trump administration to defend LGBT rights at Lambda Legal. Their responses, compiled and condensed for clarity below, shed light on what the president’s team can (and can’t) change for the estimated 1.4 million Americans who are trans.

Mother Jones: If this narrow definition of gender were adopted by the administration, what would be the practical consequences in the short term?

Shannon Minter: The only thing Trump can change are federal rules and regulations. Right now it would only apply to Title IX and the Affordable Care Act; transgender people would have absolutely no protection against being discriminated against in school or attempting to access health care. But I do want to stress: This does not change the actual statutes. Congress writes the laws, the courts interpret them, and the executive branch enforces them, but the executive branch does not get to define what the laws mean. So it’s still going to be up to the courts to decide what these laws mean.

“This does not change the actual statutes…The executive branch does not get to define what the laws mean.”

Diana Flynn: The overwhelming trend in the courts, including the appellate courts, is that discrimination based on gender nonconformity or trans status is covered [by these laws]. It’s a very strong trend throughout the courts of appeals.

SM: It would just create this chaotic situation where all these federal agencies that are supposed to be the first line of enforcement for these statutes would no longer be enforcing them.

MJ: But it seems like the administration already hasn’t been enforcing Title IX claims by students. Trump’s Education Department has said, for example, that transgender students should use bathrooms and locker rooms matching the sex they were assigned at birth.

SM: You’re right; they are already not protecting transgender people under either of those laws, Title IX or the Affordable Care Act, so it would not have any practical impact as far as that goes. And transgender students are still taking their cases to court and still winning. Every single court that has heard a case from a transgender student, with one exception that ended up settling, has concluded that Title IX protects these students. So it won’t change what the courts do and it won’t change what the Department of Education does, because the department has already abandoned these students. But it would certainly send a terrible message. And if the administration tries to use the same definition in other contexts, that could have immediate practical impacts.

“Transgender students are still taking their cases to court and still winning.”

MJ: What other contexts?

SM: I think they are contemplating coming up with a definition that they would try to include in the regulation enforcing every federal sex discrimination law—transgender people would have absolutely no protection against being discriminated against in the workplace if this definition were adopted under Title VII, for example. But it would be very difficult for them to codify their proposed definition in any kind of regulation because the agency that enforces Title VII is the Equal Employment Opportunity Commission, and they do operate with a high degree of independence, and they currently say Title VII protects trans people.

MJ: Could it affect other people besides gender-nonconforming people?

SM: There’s no way to eliminate protections for transgender people without also eliminating a huge chunk of existing protections for women, and for everybody. In 1989 there was a very important case where the Supreme Court held that federal sex discrimination law protected a woman who was denied a promotion because the committee considering her work status said, “Oh, we would promote her, but she’s not feminine enough. She needs to go to charm school and wear a different shade of lipstick and be more accommodating.” They were not discriminating against her because she was “biologically” female; they were discriminating because she did not meet their stereotypes about how a woman should behave. If the definition of sex that Trump is proposing were enacted, in that case, she would not be protected. Gay men are also often targeted in the workplace because they are perceived as being insufficiently masculine.

MJ: The leaked memo said that disputes about a person’s sex would have to be clarified with genetic testing. What issues might that raise?

DF: It’s the most radical part of this proposal. First of all, the relegation of the notion of sex and gender to genetics alone is contrary to the overwhelming view of scientists that work in this area: It is not considered true that the presence or absence of a single chromosome is the principal determinant of sex; many people for whom there would be no doubt whether we consider them a man or woman do not have the precise genetic formulation that you would expect. The science today regards a lot of factors as going into making up someone’s sex or gender and recognizes that many, many people are intersex.

“It is profoundly insulting and an enormous invasion of privacy.”

It raises other troubling questions too. It is profoundly insulting and an enormous invasion of privacy. I couldn’t imagine a court upholding it.

MJ: So far it’s just a leaked memo—what are the next steps for this to be approved?

MJ: Do you think this proposal is a reaction to anything, like court cases concerning transgender students or transgender service members or protections under Obamacare?

SM: I think it is a strategic reaction to the midterm elections. They claim they are responding to a court case, but that case was decided two years ago. So why now? It’s obvious they are trying to rally their base by once again attacking a vulnerable minority.

MJ: How are advocates responding?

DF: I don’t want to talk specifically about the prep we are doing, but if this turns out in a form that we think violates people’s rights—and in the form that’s being discussed, it certainly would—we’ll take the necessary action in court, and we’ll win, just as we’ve been winning throughout this administration as they launch one attack after another on LGBT people.