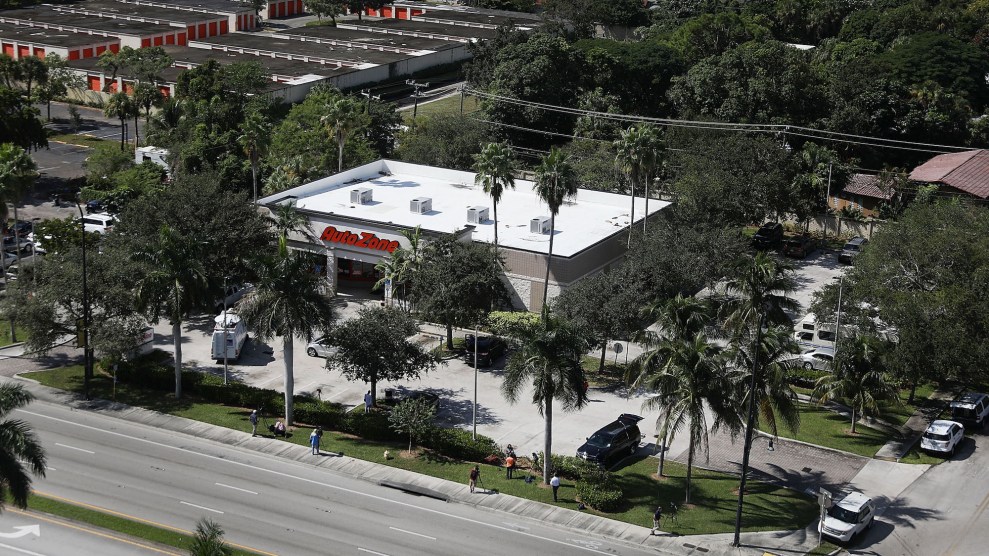 The AutoZone in Plantation, Florida, where Cesar Sayoc was arrested Friday in connection with pipe bombs being mailed to critics of President Donald Trump.Joe Raedle/Getty

The FBI and Justice Department confirmed on Friday that law enforcement authorities had arrested Cesar Sayoc Jr., a 56-year-old resident of Aventura, Florida, as a suspect in the mailing of 13 explosive devices to high-profile Democrats and critics of President Donald Trump this week.

FBI Director Christopher Wray said the bureau was able to identify Sayoc based on a partial fingerprint recovered from one of the devices, sent to Rep. Maxine Waters (D-Calif.), and that DNA collected from two of the devices matched a sample taken from Sayoc during a previous arrest.

Sayoc has been charged with five federal counts, including threatening the life a former president of the United States and interstate mailing of an explosive device. He could serve up to 58 years in prison, pending additional charges.

On Monday, the first bomb was reported at the home of liberal donor George Soros at his New York home. Over the next five days, 12 other devices were discovered, including two on Friday morning in Florida and New York, addressed respectively to Sen. Cory Booker (D-N.J.) and former director of national intelligence James Clapper. None of the devices found so far were activated.

But Wray warned that Americans needed to proceed with caution, and the extent of the operation remains unclear. “We are not out of the woods yet,” said Wray. “There may be other packages in transit now and other packages on the way.”

Wray emphasized that while the FBI was still analyzing the devices to see if they were functional, they were dangerous and “not hoax devices.” Neither Wray nor Attorney General Jeff Sessions would speculate on the suspect’s potential political motivations; both emphasized that the investigation was ongoing.

“I don’t know, other than what you might normally expect,” Sessions said at a press conference Friday. “He appears to have been partisan. That would be determined by the facts as the case goes forward.”