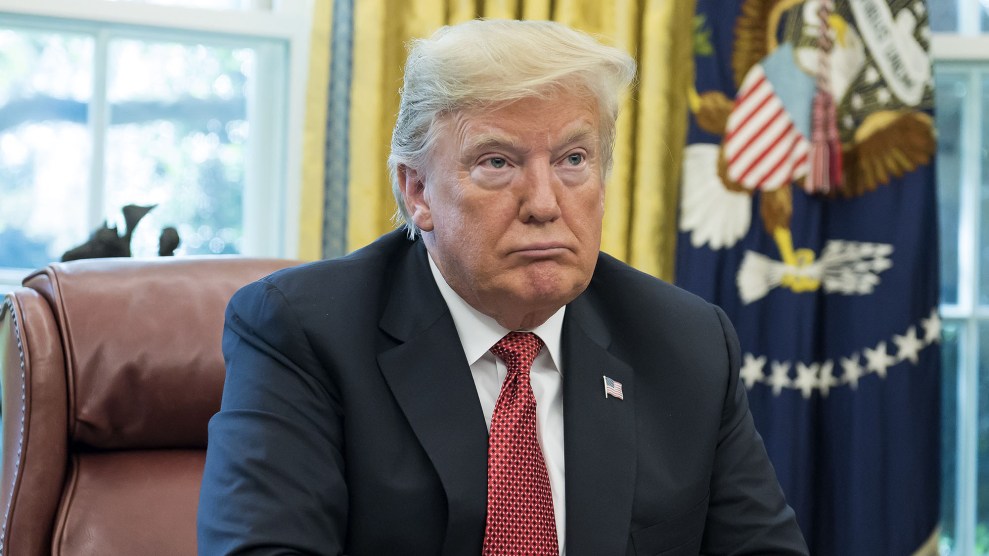 The president is tweeting blatant falsehoods yet again.

All Republicans support people with pre-existing conditions, and if they don’t, they will after I speak to them. I am in total support. Also, Democrats will destroy your Medicare, and I will keep it healthy and well!

This statement bears absolutely no relation to reality. As president, Donald Trump has repeatedly tried—and so far failed—to end the rules that ensure that people with preexisting conditions have access to health insurance.

Trump spent much of the 2016 campaign talking about how once he was president, he was going to repeal the Affordable Care Act (also known as Obamacare), the law that made it illegal for insurance companies to deny coverage or charge higher rates because someone has a preexisting medical condition. But, he reassured people, that would not mean ending those protections.

Then Trump spent much of 2017 boosting congressional Republicans’ efforts to repeal the ACA. While initial versions of the bill would have left many of the preexisting condition protections untouched, in order to win over the more conservative elements of their caucus, House Republicans tacked on a provision that would in fact have allowed states to opt out of a key protection—the ban against insurers charging sick people higher rates—rendering any preexisting condition measures meaningless. When that bill passed the House, the president summoned party leaders for a celebration on the White House lawn.

Even after the GOP failed to overturn Obamacare in the Senate, Trump got busy whittling away at the law from the White House. Earlier this summer, his administration gave its support to a lawsuit filed by Republican state attorneys general, which, if successful, would explicitly overturn Obamacare’s preexisting condition protections. When Attorney General Jeff Sessions announced that decision in a letter in June, he started off by stating that he was acting “with the approval of the President of the United States.” That case is still ongoing, and the Trump administration hasn’t changed its stance.

Now in the throes of campaigning for reelection, Republicans across the country have been trying to rewrite their health care stances, and for good reason: Health care is a top concern among voters. A poll from the Kaiser Family Foundation released Thursday found that voters ranked health care as the most important factor in the election.

Still, that hasn’t stopped some Republicans from being upfront about their true goals. Senate Majority Leader Mitch McConnell (R-Ky.) gave away the game during an interview with Reuters on Wednesday, promising that Republicans would once again try to repeal the ACA if they do well enough in next month’s midterms. “If we had the votes to completely start over,” McConnell said, “we’d do it. But that depends on what happens in a couple weeks…We’re not satisfied with the way Obamacare is working.”