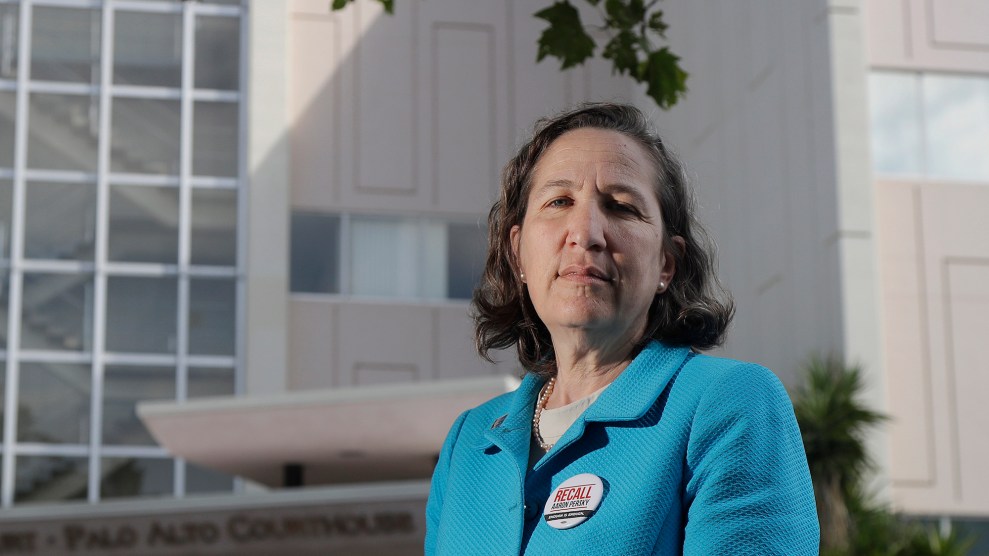 Just imagine: A veteran judge is swept off the bench because of his role in a sexual assault controversy and a Stanford professor who would not stay quiet. After Brett Kavanaugh’s Supreme Court nomination hearings, that might seem like a fantasy. But back in June, Michele Dauber made it happen in California. Two years after Santa Clara County Superior Court Judge Aaron Persky sentenced former Stanford student Brock Turner to six months in jail for sexually assaulting an unconscious woman, Dauber’s campaign to recall the judge won over voters—by a staggering 23-point margin.

Now, the Stanford law professor who orchestrated her state’s first successful judicial recall campaign in 86 years is back, launching a super-PAC she hopes will hold lawmakers across the country accountable for their records on sexual violence. “Our perspective on the recall was that we were putting rape culture on the ballot,” Dauber says. “But all across America, rape culture is already on the ballot. We don’t even have to put it there—because there are many, many elected officials and candidates who have very discrediting records on this issue.”

The Enough is Enough Voter Project will target candidates who have been credibly accused of sexual assault, harassment, or domestic violence, as well as those who have made sexist statements or voted against bills supported by survivors. When the group launched last Monday, just six weeks from the midterm elections, Dauber had a goal of raising $250,000 to inform voters about the records of the five Republican men her group is opposing.

That includes current Minnesota Rep. Jason Lewis, who is running in a tight race against challenger Angie Craig, a Democrat endorsed by EMILY’s List. Earlier this summer, CNN exposed misogynistic comments Lewis made on a radio show in 2012, when he complained at length that he could no longer call women “sluts” and argued that “young single women” who vote based on insurance coverage for birth control pills were “without a brain” and no longer human beings. (He’s also made racist and homophobic statements.)

Dauber’s group is not just focusing on competitive races. “We need to see these individuals exit the political arena at an early stage,” she says. “Think of the amount of damage they could do as they go onto their careers.” Enough is Enough has also honed in on Steve Von Loor, a candidate for a House seat in solidly blue Durham County, North Carolina, who was accused of domestic violence by his ex-wife in 2010. (Von Loor denies the allegations.)

The group has also identified a few state legislators to go after: David Byrd of Tennessee, who is accused of sexually assaulting three teenagers he coached on a high school basketball team; Matt Rinaldi of Tennessee, who voted against a bipartisan bill to extend the statute of limitations for rape victims; and Devon Mathis of California, who was reprimanded for sexual “locker room talk” by the state Legislature and sued by multiple staffers alleging sexual misconduct or retaliation. (Both Mathis and Byrd have denied the claims against them.)

In interviews with the New York Times, multiple candidates on Enough is Enough’s list argued the new super-PAC is a Democratic operation ignoring misconduct by liberal lawmakers. But Dauber says she’s also game to take on Democrats in the 2020 primaries.

Dauber says the greatest lesson from the recall campaign against Persky was the way the issue of sexual violence energizes young female voters. “They will vote in large numbers,” she says. “They will volunteer, they will work harder than they’ve ever worked on anything before.”

Dauber has already proven herself a formidable fundraiser. With her new super-PAC, she’s working with much of the same team that worked on the recall election, including Emiliana Guereca of Women’s March Los Angeles. The group also has the backing of the Feminist Majority, a prominent women’s advocacy group.

Dauber says she hopes her new group will become “a presence” in American politics. “These guys are wrong,” she says. “They should not be in public office, and we are going to take them out.”