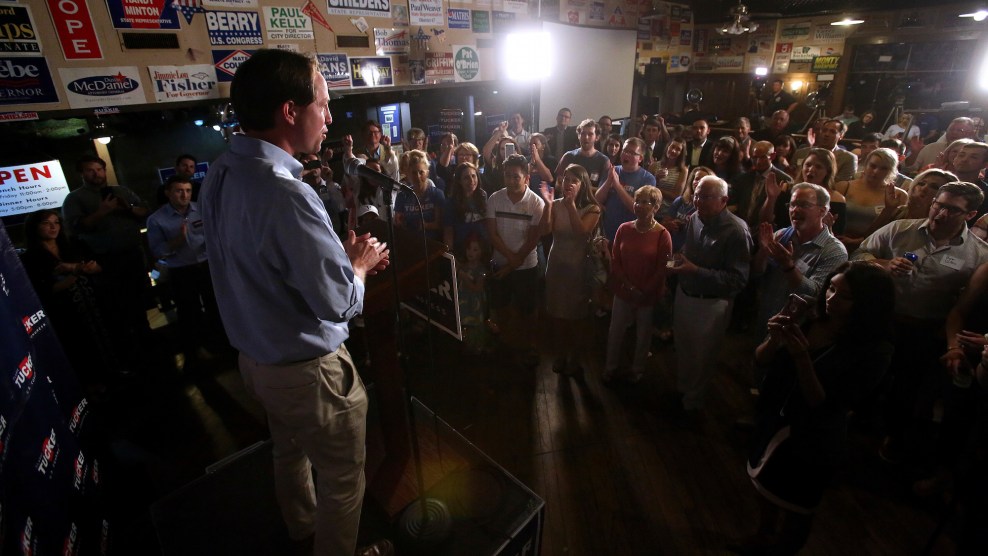 While Republican politicians have lately been backtracking their positions on pre-existing conditions, deep in the heart of Trump Country a Democratic politician is anchoring his congressional campaign on his personal story of beating cancer and his role in expanding access to Medicaid in his home state.

Arkansas’ 2nd Congressional District is typically a reliably Republican area. The district, which includes Little Rock, went for Trump by 10.7 percent in 2016, and two-term incumbent Republican Rep. French Hill won re-election by 22 percent that year. But state Rep. Clarke Tucker, Hill’s Democratic challenger, has turned it into a more competitive seat this time around by pushing health care as a central message, attacking Hill for voting to repeal the Affordable Care Act last year.

The great-great grandson to a 20th century US senator—whose statue at the US Capitol he recently advocated to remove because of his ancestor’s racist views—37-year-old Tucker has a law degree from the University of Arkansas and was elected to serve in the state house in 2014. Once in office, he helped craft legislation that continued the state’s participation in the ACA’s Medicaid expansion, a part of the law that opens Medicaid insurance coverage to people making up to 138 percent of the poverty line. In 2016, Republican Gov. Asa Hutchinson sought to replace the state’s private plan alternative to Medicaid with a plan called Arkansas Works, using expanded Medicaid funds to assist with premiums. But a Republican super-majority in the legislature resisted the move, trying to tack on a special language amendment that would have killed the program. Tucker was praised by Hutchinson for his efforts in making sure the final language of the bill allowed for the amendment to be vetoed.

But just as he was considering running for higher office, Tucker was diagnosed with bladder cancer. He was cleared with a clean bill of health in October 2017, but his personal experience living with a preexisting condition has become a central message in his fight against Hill, who voted to repeal the ACA. “I, like 1 million Arkansans, live with a preexisting condition. For us and our families, the notion of having access to care without going bankrupt or dying is a daily reality,” Tucker wrote in a letter to the Northwest Arkansas Democrat-Gazette in September in light of a lawsuit brought by state Attorney General Leslie Rutledge to eliminate protections for those with preexisting conditions.

Democrats have struggled at times to pick a single defining economic message for elections, but with a botched attempt by Republicans in 2017 to repeal and replace the ACA, they might have found a swing issue for voters. Voting for an incumbent like Hill, who supported Congress’ efforts to repeal Obamacare, is a tough sell for residents of a state that has one of the highest rates of Medicaid coverage  in the country.

Last week, Tucker’s campaign released an ad featuring a former Hill voter who discovered she had cancer just as Republicans in the House were debating to dismantle the ACA last year. “And they chose to celebrate in the Rose Garden. That is not protecting pre-existing conditions,” she says in the 30-second clip.

Hill has denied that his vote would have hurt those with preexisting conditions. “My vote for the health care bill was one aimed solely at fixing the flaws of our current failing health care system, which the Democratic Party, under Nancy Pelosi’s leadership, created,”  Hill said in a statement to the Arkansas Democrat-Gazette. But the bill Hill voted for would have allowed states to opt-out of Obamacare’s rules that prevent insurers from charging people higher rates based on their past illnesses, essentially allowing states to erase the law’s protections for people with preexisting conditions.

While Democratic candidates across the country have been campaigning against their opponents’ votes to repeal Obamacare, in Arkansas there is a particular local concern when it comes to health policy. In March, the Trump administration approved a waiver from the state, which allowed Arkansas to become the first state with a work requirement for Medicaid applicants. While the program does not go into full effect until 2019, over 8,000 people have already been removed from the state’s Medicaid rolls.

As a legislator, Tucker opposed the work requirements. “If we put on requirements we may actually hurt people’s ability to work at the same time we are hurting their ability to have health care,” Tucker said in a local news interview in August, adding that the state’s notorious internet connectivity problems also make the reporting system dangerously burdensome to participants. Hill, on the other hand, joined in a press release with the rest of the state’s congressional delegation applauding the measure, calling it “a common-sense policy with a track record of success.”

Tucker out-raised Hill by $100,000 in the most recent campaign finance report, and he got an 11th-hour assist from the Democratic Congressional Campaign Committee, which earlier this month bought a quarter of a million dollars worth of ad time to support of his candidacy. His campaign has enlisted help from national Democrats on the trail, including Rep. John Lewis who has been campaigning for Tucker in the state’s black community.

Still, Hill is still the favorite to win the district. There hasn’t been much public polling, but the most recent survey in early September found Tucker down by 9 percent. FiveThirtyEight only gives Tucker a 1-in-5 chance of winning, and the Cook Political Report rates the district as lean Republican.
“I do think that it’s a winnable race for Tucker,” says Jay Barth, a professor of political science at Hendrix College. Barth pointed to Tucker’s efforts to sway female voters in suburban, traditionally conservative areas of the district as key. “He’s doing what he needs to do which is emphasizing health care,” Barth says, “and he has the ability to do that from a personal perspective from his own battle with cancer, and he’s effectively communicated preexisting conditions coverage.”