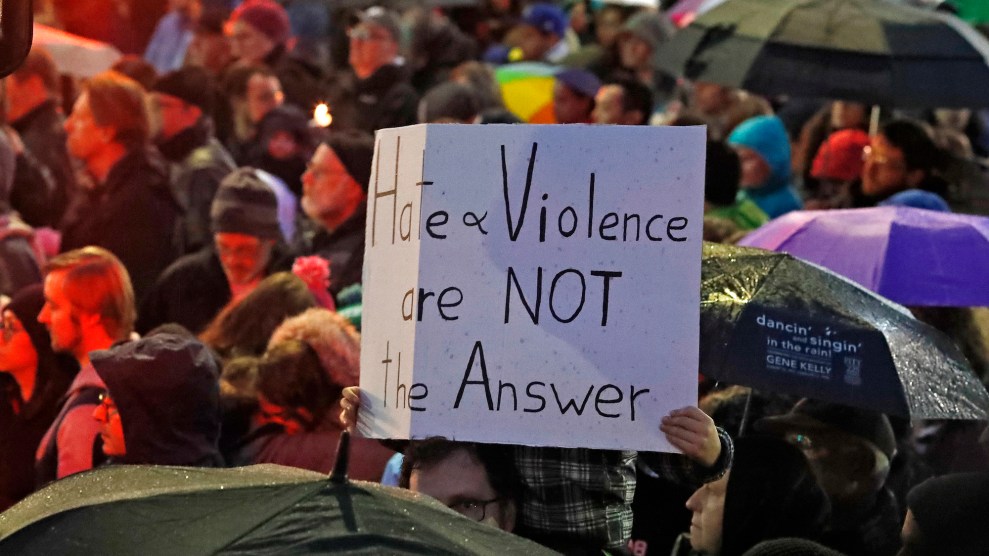 A young boy holds a sign in the Squirrel Hill section of Pittsburgh during a memorial vigil for the victims of the shooting at the Tree of Life Synagogue on Saturday, Oct. 27, 2018.Gene J. Puskar/AP

As news broke that eleven people had been shot dead during Sabbath services at a Pittsburgh synagogue on Saturday morning, I called Shannon Watts, the founder of the national grassroots gun violence prevention organization Moms Demand Action, who has been a leading voice on gun reform since the 2012 elementary school massacre in Newtown, Connecticut. I asked Watts what she had to say about yet another mass shooting—an exercise that’s become somewhat routine.

“People are fed up with the hateful violence in this country, and the gun violence that is plaguing it.”

Instead of answering my question, Watts wanted to talk about a shooting that hadn’t even taken place: She told me the story of a mother who reported a white man to police after he sent her a private Facebook message that said he hoped her “black children get hung.” The man, it turns out, had been scheming to conduct a school shooting against two Kentucky school districts.

Watts brought this up, of course, to illustrate the tragic trend of shootings targeting minority communities that has played out in America this week. The attack on the Tree of Life Synagogue in Pittsburgh—when the shooter reportedly entered the building yelling “All Jews must die!”—comes just days after a white man killed two black patrons of a Kroger grocery store near Louisville, Kentucky. That incident, like the Pittsburgh massacre, is being investigated by the FBI as a potential hate crime, a category of criminal act strongly associated with America’s epidemic of mass shootings.

“People are fed up with the hateful violence in this country, and the gun violence that is plaguing it,” Watts told me. “If you look at all the tentacles that contribute to these heinous acts, easy access to arsenals and bulk ammunition plays a major role.”

There isn’t a lot of data on how much gun violence is motivated by hate. According to an analysis of FBI crime statistics by Everytown for Gun Safety, more than 10,000 hate crimes each year—20 percent of which are religiously motivated—involve a firearm. This could be an undercount: A 2017 report from the Brady Campaign to Prevent Gun Violence estimates two-thirds of hate crimes are never reported, perhaps because historically marginalized victims may not be comfortable reporting to law enforcement. However many there are, it seems there are more and more: A 2018 report from the Center for the Study of Hate and Extremism at California State University at San Bernardino found that hate crimes increased by 12 percent in the nation’s 10 largest cities over the course of 2017.

Gun violence prevention experts say there are concrete measures that can be taken to keep firearms out of the hands of racist or hate-based killers. While six states have banned people with hate crime convictions from purchasing guns, federally-mandated background checks do not currently flag whether the would-be gun owner has been charged or convicted of one. “It’s a gaping hole in our gun laws,” according to Avery Gardiner, the co-president of the Brady Campaign to Prevent Gun Violence. “People we know hate other people based on immutable characteristics are pretty dangerous.”

Gardner also noted that “red flag” laws—which keep guns out of the hands of those who pose a risk to themselves or others—could be used to disarm someone in likely to commit a hate crime. Judges already charged with making such decisions could consider if someone with access to guns was liable “to act on bigotry.” A federal red flag law has been pending in Congress since the Parkland shooting, but it, like all other federal gun violence legislation, has languished without a vote. (More than 10 states have passed red flag laws in recent years.)

Before departing for campaign events in the Midwest, President Donald Trump told reporters that gun laws had “very little to do” with the attack on Tree of Life, and suggested that the shooter, who shot four police officers, might have been stopped by an armed guard.