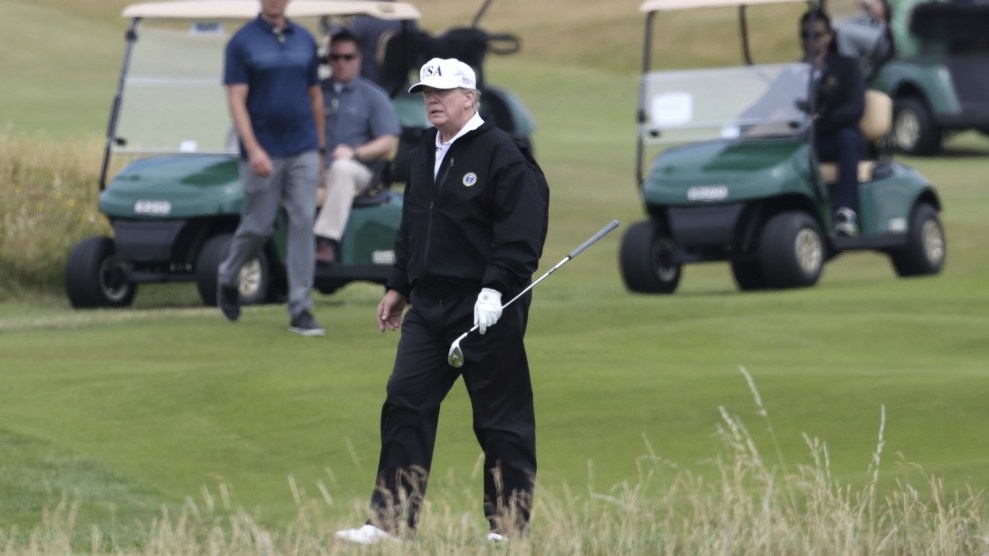 Donald Trump playing a round of golf at his Turnberry resort in July 2018.Press Association via AP Images

A new corporate filing in the United Kingdom shows that Donald Trump’s prized Turnberry golf resort still hasn’t turned a profit for the president. According to paperwork filed last week by the Trump Organization, the Scottish property lost £3.3 million or nearly $4.5 million in 2017.

The new numbers add some less-than-favorable context to the rosy picture Trump attempted to paint of his finances in his annual personal financial disclosure this past spring. On those forms, which are filed with the Office of Government Ethics, Trump claimed the course earned him $20.3 million in “golf revenue.” The UK filings for his company, Golf Recreation Scotland Limited, the parent firm of the Turnberry resort, back that up. But Trump didn’t disclose that he spent far more to operate the course—in other words, that he had taken a loss on the venture. Trump owns two other courses in Europe, including another property in Scotland and one in Ireland. Corporate filings concerning these courses have yet to be filed covering 2017, but in previous years they have lost money.

The Turnberry course, likewise, has been in the red since Trump purchased it in 2014 for $60 million. He subsequently pumped more than $140 million into renovating the property. The Trump family has previously blamed the Turnberry’s losses on the fact that the resort was partially closed. Last year, however, the resort was fully open for business. In 2016, UK filings show that the course lost $23.7 million, when it was only open for 6 months. In 2017, the course brought in more than $18 million, a dramatic increase from the $11.1 million the prior year, but also saw its overhead and operating costs increase. When all was said and done, the course had an operating loss of $1.5 million; depreciation added another $3 million to the loss column.

According to business filings, the course has lost about $44.5 million since 2014.

Trump visited Turnberry in July, playing two rounds of golf before jetting to Helsinki for a meeting with Vladimir Putin. Trump’s weekend visit to Scotland was estimated to cost UK taxpayers up to $6.5 million to cover the cost of security and logistics. The Turnberry’s filings show the business paid $129,000 in taxes last year.

The full corporate filing is below.