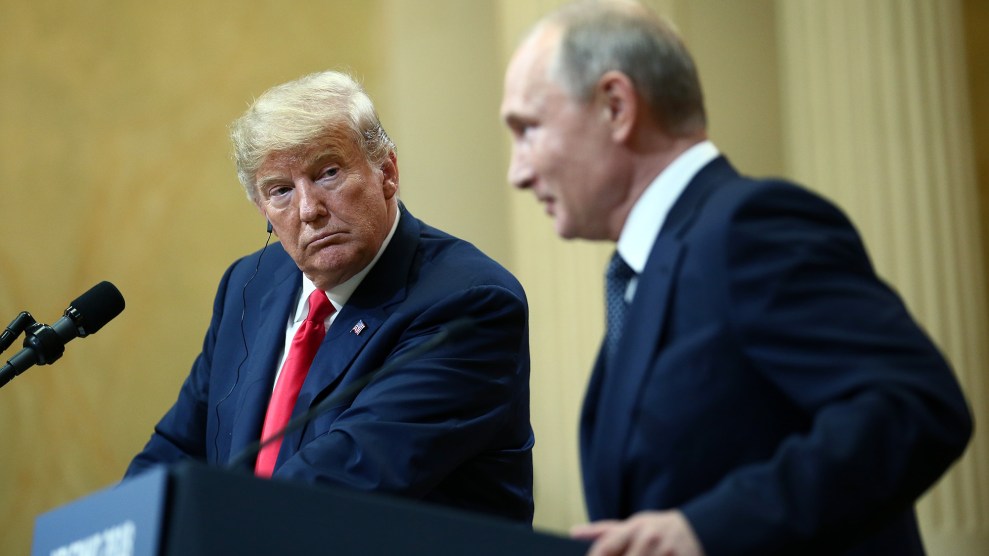 On Friday, the US attorney in the Eastern District of Virginia unsealed a criminal complaint accusing a Russian national named Elena Alekseevna Khusyaynova of conspiring to interfere in the US political system. The document maintains that as a financial officer, Khusyaynova was part of the effort mounted by the Internet Research Agency, a troll farm in St. Petersburg funded by a Russian oligarch close to Vladimir Putin, to use Facebook and Twitter accounts to influence politics in the United States. The IRA’s role in Putin’s attack on the 2016 election—a scheme that was part of what’s known as “Project Lakhta”—has already been revealed. But the complaint highlights a less-known fact: that the Russian attack “continues to this day” and is partially aimed at the 2018 midterm campaign. That is, the United States, as it heads toward a crucial election, remains under assault by the Kremlin.

This Kremlin plot remains active and has targeted the 2018 midterms.

President Donald Trump, whose election, according to a 2017 US intelligence community assessment, was one goal of the Russian plot, has refused to seriously address Russia’s covert exploitation of US social media to undermine American politics. For instance, on September 27, 2017, after Facebook revealed that Russian government operatives had secretly placed political ads on the site during the 2016 campaign, Trump dismissed the matter and tweeted that the “hoax continues, now it’s ads on Facebook.” Yet his own Justice Department now says Russia “to this day” is conducting what Project Lakhta has internally called “information warfare against the United States of America.”

The DOJ contends that the “strategic goal” of the Russian operation is to “sow division and discord in the US political system, including by creating social and political polarization, undermining faith in democratic institutions, and influencing US elections, including the upcoming 2018 midterm elections.” According to the criminal complaint, the monthly budget of Project Lakhta, which does not focus exclusively on the United States, is generally between $1 million and $2 million. In a press release, the DOJ states that “The conspirators’ alleged activities did not exclusively adopt one ideological view.” But most of the examples cited in the criminal complaint—which is full of details indicating the FBI obtained copies of the internal records of several Russian companies involved with the IRA—are actions that bolster Trump and conservatives.

As the complaint puts it, the Russian operation aimed to “inflame passions on a wide variety of topics, including immigration, gun control and the Second Amendment, the Confederate flag, race relations, LGBT issues, the Women’s March, and the NFL national anthem debate,” and that it sought to exploit specific events in the United States, including the Las Vegas mass shooting and the “Unite the Right” rally organized by white supremacists in Charlottesville.

Though the Russian plotters did zero in on both Democratic and Republican targets and pushed tweets and Facebook posts with conservative and progressive bents, the majority of the activity described in the complaint was geared toward messaging that would benefit Trump. Citing internal communications of the Russian “Conspiracy,” the complaint reveals that the “Tasking Specifics” included branding Sen. John McCain “an old geezer” and Trump hater who irrationally opposed sensible border security; casting House Speaker Paul Ryan as an “absolute nobody” for not embracing Trump’s immigration policies; pushing the phony notion that there are millions of illegal voters and that Democrats will use them in upcoming elections “to falsify the results”; assailing anti-Trump Republicans as traitors; denouncing special counsel Robert Mueller as an establishment puppet who cannot run an honest investigation and whose probe was damaging to the United States; boosting the idea that CNN, the New York Times, the Washington Post, and other major media outlets were disseminating fake news and lies about Trump; deriding Sen. Marco Rubio as a fake conservative and traitor to Republican values for not supporting an immigration bill backed by Trump; and depicting Senate Majority Leader Mitch McConnell as a vile liberal for not pursuing all of Trump’s election promises.

One 2017 Facebook post that was part of the clandestine influence campaign included a photograph of President Barack Obama surrounded by Arab-looking men and stated, “Instead [of] this stupid witch hunt on Trump, media should investigate this traitor and his plane [sic] to Islamize our country. If you are true enemy of America, take a good look at Barack Hussein Obama and Muslim government officials appointed by him.”

The complaint alleges Project Lakhta used fake personas on Facebook after the 2016 election to create a Facebook page for a group called “Stop A.I.”—shorthand for “Stop All Invaders”—which published anti-immigration and anti-Islam posts that reached 1.4 million individuals during one week in July 2017. The page overall received nearly 200,000 likes. (The Russian conspirators allegedly even persuaded an American to manage the page, without this person realizing it was a Kremlin operation.)

Some activity described within the complaint did fall on the other side of the political spectrum. A Twitter account identified as @KaniJJackson posted about “controversial social and political topics from a perspective that…would resonate with a liberal audience in the United States,” the document states. And a false Facebook account allegedly set up by the Russians tried to collaborate with three anti-Trump organizations in the United States that were organizing a flash mob at the White House for July 4, 2017. One phony Twitter account created by the Russians called for supporting Democrat Doug Jones in the special Senate election in Alabama against Republican Roy Moore. However, yet another urged voting for Moore, and a third called for small donations to defeat Democrats in the 2018 midterms.

The examples in the complaint show that the Russian attack in 2017 and 2018 has focused on Democrats and Republicans alike, but that, overall, much of the secret Russian activity has favored Trump and his right-wing followers. That means Trump has continued to be aided by Putin’s information warfare operation long after Election Day. Moreover, the complaint is unambiguous: The Kremlin plot, which influenced and shaped the 2016 presidential campaign, is active and targeting the 2018 midterms. This warning is not emanating from any partisan shop; it comes from the Justice Department that Trump (supposedly) oversees. Yet Trump continues to decry Mueller’s investigation of the Russian attack as a “witch hunt”—and says nothing about Russia’s ongoing intervention in American democracy and the current elections.

The Khusyaynova case is one small piece of the picture. But the message presented by the Justice Department is alarming and huge: The midterms are not safe from Russian interference.