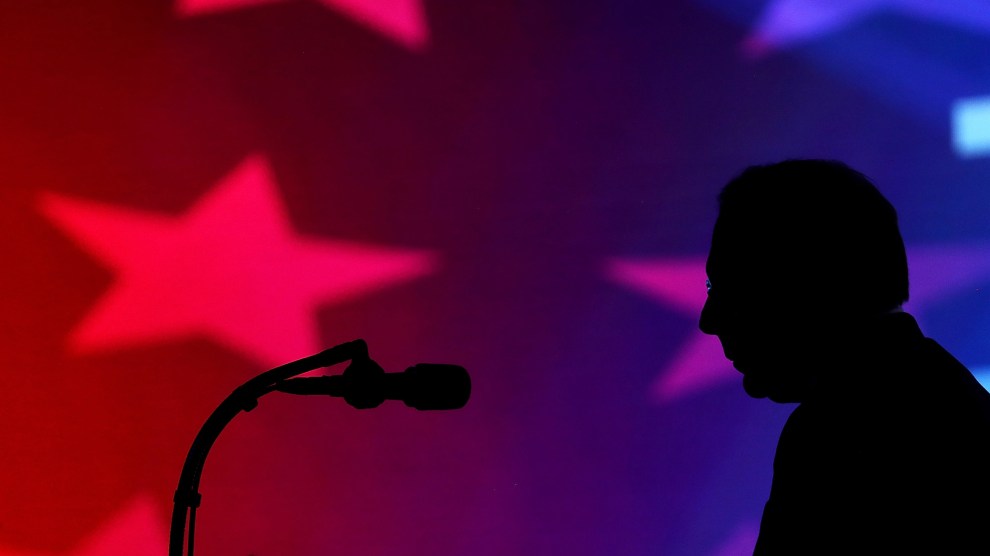 The complaint from the Campaign Legal Center, a nonpartisan watchdog, and Giffords, a gun violence prevention group, raises questions about whether GOP campaign contractors and vendors are facilitating hidden coordination between campaigns and the outside groups who support them. The complaint is the third in four months to accuse the NRA of appearing to use a shell company to circumvent laws against such coordination.

The complaints are based in part on an ongoing investigation by the Trace showing that the NRA’s exclusive political advertising consultant, Starboard Strategic, may be functioning as a front for the prominent conservative political consulting firm OnMessage Inc. (Mother Jones and the Trace have teamed up to further investigate the NRA’s finances and political activity.) Starboard Strategic has received more than $60 million from the NRA since 2013.

Signing under two different names, the complaint says, “The same official placed advertisements on behalf of the NRA [Political Victory Fund] and Josh Hawley for Senate at the same station on the same day.”

Corporate records show that OnMessage and Starboard share the same offices and leadership. The Trace has documented six Senate races in which a Republican candidate hired OnMessage while, in the same cycle, the NRA paid Starboard for ads in support of the same candidate. In 2014, those candidates included Thom Tillis in North Carolina, Cory Gardner in Colorado, and Tom Cotton in Arkansas. Two years later, the arrangement occurred in Wisconsin, with Sen. Ron Johnson. And now it is playing out again, this time in Missouri with Hawley and in Montana with GOP candidate Matt Rosendale.

When campaigns and outside groups use a common vendor, the FEC requires the firm in the middle to establish a strict “firewall” preventing executives and staffers working for either client from sharing information. Starboard’s status as a separate legal entity gives the appearance that the NRA is using a different vendor from the campaigns it supports, even though, according to the Campaign Legal Center, Starboard seems to be “functionally indistinguishable” from OnMessage. Both OnMessage and Starboard have repeatedly declined to disclose details of any such firewall policy.

So far this cycle, the NRA has placed nearly $1 million in ads through Starboard supporting Hawley over Missouri’s Democratic incumbent, Sen. Claire McCaskill. Hawley, meanwhile, has paid OnMessage more than $2 million for its consulting services.

The NRA, the Hawley campaign, OnMessage, and Starboard did not respond to requests for comment.

The latest FEC complaint also alleges a new avenue of potentially illegal coordination: According to Federal Communications Commission records, the complaint says, the NRA is also placing ads in Missouri through Red Eagle Media, which is a “trade name” for a well-known media consultant called National Media Research, Planning, and Placement. At the same time, FCC records show, the Hawley campaign has paid an affiliate of National Media Research, called American Media and Advocacy Group, LLC, for ad buys.

“In at least one instance,” the complaint says, “the same National Media official”—signing documents under Red Eagle for one client, and under American Media for the other—“placed advertisements on behalf of the NRA [Political Victory Fund] and Josh Hawley for Senate at the same station on the same day.”

National Media Research is housed in the same Alexandria, Virginia, office building as Starboard and OnMessage. It did not respond to a request for comment.

The complaint comes a week after nine senators called on the FEC to investigate the NRA’s arrangement with Starboard Strategic, asserting that it is “highly likely” the company has been used for the purpose of “sharing proprietary information.”

Clarification: This story has been updated to reflect Hawley’s most recent payments to OnMessage, which are not yet reflected in the Federal Election Commission’s searchable database.