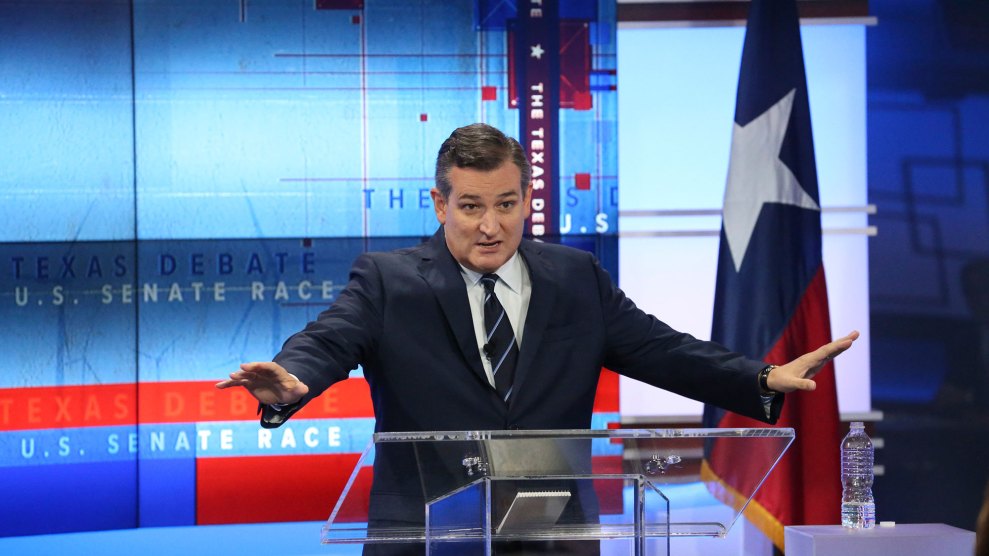 Opponents of Texas Democratic Rep. Beto O’Rourke have tried, with some success, to bring his poll numbers down to earth with a frenzy of attack ads. The Dallas Morning News found that 80 percent of ads by Republican Sen. Ted Cruz and his allies last month were negative spots, attacking the El Paso congressman for, among other things, supporting NFL quarterback Colin Kaepernick’s protest of police brutality, advocating for a less draconian immigration policy, and backing a controversial downtown redevelopment plan in El Paso a decade ago.

O’Rourke’s record-breaking fundraising success—he’s received more money from Texans than Cruz, both proportionately and overall—has been a frequent line of criticism from the GOP incumbent, but Cruz is the candidate who’s benefited most from deep-pocketed donors. Texans Are, a super-PAC formed last year with the express purpose of reelecting Cruz, brought in another $1.5 million over the last month, according to Federal Elections Commission filings posted on Saturday. At just under $33,000, the average donation turned out to be a teensy bit higher than O’Rourke’s $50. Four billionaires made their first contributions to the group last month, joining the 11 others who have already given to Texans Are. This coterie of new contributors includes a collector of Nazi art, a businessman who dresses up as a mattress, and one of America’s largest landowners.

Here’s a quick guide to some of them:

Bob McNair ($100,000): During a wave of player protests in 2017, the billionaire Houston Texans owner, who made his first fortune selling his energy company to Enron, lamented that the league’s “inmates” were “running the prison”—nearly leading to a walkout by his team. “As employers, we set conditions for all of our employees; we don’t allow political meetings or statements or that sort of thing during working hours,” he told the Wall Street Journal. But McNair doesn’t mind bringing his own political views into the office. After the election of Barack Obama in 2008, one former Texans player said last year, McNair dropped by a practice to talk to the team about his concerns: “I know a lot of y’all are happy right now, but it’s not the outcome that some of us were looking for.” As a max donor to Cruz’s campaign and a million-dollar donor to Paul Ryan’s Congressional Leadership Fund, McNair has bankrolled ads attacking O’Rourke and other Democratic candidates for supporting blacklisted NFL quarterback Colin Kaepernick.

Kelcy Warren ($25,000): Warren is the chairman and CEO of Energy Transfer Partners, the company responsible for building the controversial Dakota Access Pipeline from North Dakota to Illinois, as well as the Trans-Pecos pipeline through Texas’ Big Bend region. Both projects made use of eminent domain from ranchers and farmers—a practice Texans Are highlighted in its attacks on O’Rourke. Warren and his partners gave $223,000 to the Texas Railroad Commissioners, who ultimately approved the latter project. His own property on the border, though, has been spared by the wall; he owns Lajitas Resort in far West Texas, a golf resort and outdoorsy base camp which encompasses 20,000 acres along the Rio Grande and is governed (informally) by a beer-drinking goat.

Wayne Hughes Jr. ($50,000): The Malibu, California, billionaire took over Public Storage, the nation’s largest self-storage company, from his father. He’s a major backer of the criminal justice reform group Right on Crime and contributed $117,000 to help elect avowedly pro-immigration and anti-war-on-drugs Gary Johnson for president in 2016—evidence of a libertarian streak that’s at odds with Cruz’s and Texans Are’s law-and-order campaign ads.

Frayda Lindemann ($10,000): The widow of late pipeline and communications billionaire George Lindemann Sr., she and her husband divided their time among their residences in Palm Beach, Florida; Greenwich, Connecticut; and Manhattan. The couple each donated the maximum amount to Cruz’s presidential campaign in 2016.

James McIngvale ($25,000): Known as “Mattress Mack,” McIngvale’s Gallery Furniture megastore is a Houston institution. He’s known for his flamboyant stunts and colorful ads. Unlike most of Texans Are’s donors, McIngvale’s seeks out the political spotlight. Earlier this month, he filmed a campaign ad for GOP Rep. John Culberson where he speaks directly to the camera at his furniture store:

Stacy Hock ($100,000): An Austin native and former IBM executive, Hock is one of the state’s leading advocates for private-school vouchers through the organization she co-founded, Texans for Education Opportunity. She once paid $14,000 for a dozen cronuts at a New York charity auction.

Joseph Sutton ($50,000): Sutton was a former vice chairman of Enron, where he ran the company’s international portfolio. He’s now a limited partner in McNair’s Houston Texans and owns a thoroughbred horse farm in Kentucky. Unlike most of his peers on this list, Sutton gives to Cruz and only Cruz—at the federal level, no other candidate has scored a donation from Sutton over the last four years.

Russell Gordy ($100,000): The Houston oilman, whose company has branched out into real estate and mining, owns $96 million worth of ranches across the West. He contributed to the PAC through one of his companies, Rock Creek Ranch I LTD. In his spare time, he works behind the counter at his high-end gun shop in Houston. A longtime Republican donor, he’s also poured money into down-ballot races that might affect his business interests; in 2011, he helped unseat a Colorado commissioner from Garfield County (where he owns land) and replace him with a friendly Republican who supported his company’s drilling plans.

Harlan Crow ($75,000): The Dallas real-estate developer gained some prominence during the 2004 presidential election, when he was a major backer of Swift Boat Veterans for Truth, which smeared Vietnam veteran John Kerry. (He’s also a big-time donor to the conservative Club for Growth.) Crow built a $5.1 million, 77-car underground garage adjacent to his Highland Park mansion, where his collection of historical artifacts includes paintings by Adolf Hitler and a copy of Mein Kampf.