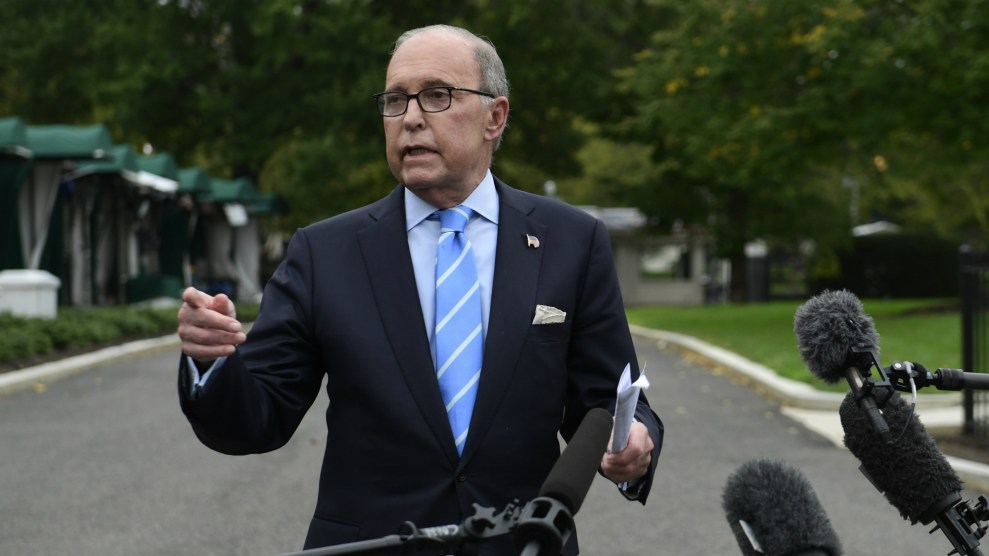 “I won’t say it’s a scare tactic, but I think they overestimate,” Kudlow told George Stephanopoulos on ABC’s This Week on Sunday morning.

Kudlow insisted he wasn’t questioning the science, but then he immediately, well, questioned the science.

Kudlow was asked about the report in the context of Hurricane Michael, which devastated a large section of Florida’s coast late last week.

The UN Climate report, released on Oct. 6, has attracted a great deal of attention precisely because it predicts fast-approaching, catastrophic outcomes from climate change if drastic steps are not taken quickly. Some of the direst consequences that scientists once believed wouldn’t occur for decades, the authors note, could become reality as soon as 2040. The report involved the work of more than 90 scientists, who worked through more than 6,000 studies on the effects of climate change and ways to fight it.

Kudlow, who was appointed director of the National Economic Council in March, has a history of making bad predictions. Most notably, in December 2007, Kudlow wrote several columns for the National Review mocking economic analysis showing a major economic recession was brewing. Kudlow argued that the Bush economy was strong and would continue as such.

Kudlow’s comments to Stephanopoulos are among the first from the Trump administration on the UN’s climate report. Last week, Trump told reporters that the report had been provided to him, but he wanted to find out more information about who put it together.

Kudlow’s skepticism stood in contrast to fellow “This Week” guest Sen. Jeff Flake (R-Ariz.) who told Stephanopoulos that he was concerned about the report’s findings and thought it was politically important for Republicans to acknowledge it.

“I hope that we can move along with the rest of the world and–and address this,” Flake said. “It’s–it’s going to be challenging. Obviously, that report that came out is – is pretty dire, but there are things that we can do and should do and I think Republicans need to be at the forefront if we want to keep–keep our place and keep our seats.”

“The comments a moment ago that Larry Kudlow made are so irresponsible, so dangerous that it’s just hard to believe that a leading government official could make them,” Sanders said. “What the inter-governmental panel on climate change said is that we have 12 years—12 years to substantially cut the amount of carbon in our atmosphere or this planet, our country, the rest of the world, is going to suffer irreversible damage.”

“We are in crisis mode and you have an administration that virtually does not even recognize the reality of climate change and their policies, working with the fossil fuel industry, are making a bad situation worse,” Sanders added.