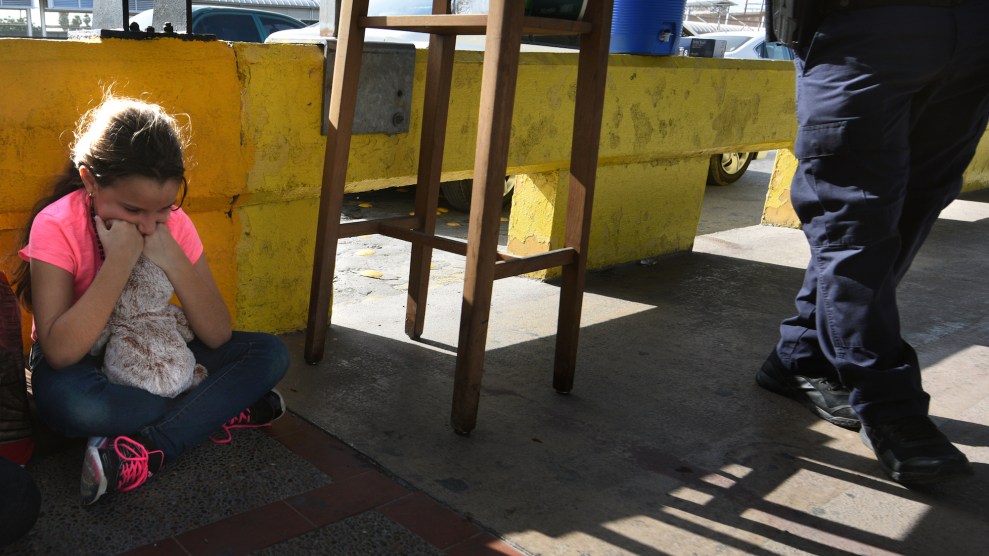 A Cuban family waits to request humanitarian protection after being forced to wait by US border officials in Brownsville, Texas, in July.Carol Guzy/Zuma

The American Civil Liberties Union is suing the Trump administration to stop it from implementing a new policy that blocks migrants from receiving asylum if they cross the US-Mexico border illegally.

President Donald Trump signed a proclamation on Friday morning that makes adults and families ineligible for asylum for at least 90 days if they cross the border between official ports of entry. As Mother Jones reported:

Trump’s proclamation flouts the plain text of US immigration law, which states that migrants are eligible for asylum “whether or not” they arrive “at a designated port of arrival.” But, as with his travel ban last year, Trump is using a section of US law that gives him broad power to temporarily ban groups of people from coming to the United States if he deems their entry to be “detrimental” to the national interest.

The ACLU lawsuit, which was filed in the progressive Northern District of California, argues that the new rule violates two federal laws.  The organization is asking the court to find the new policy unlawful and block it from going into effect. The ACLU states in its complaint:

Together, the rule and Proclamation bar people from obtaining asylum if they enter the United States somewhere along the southern border other than a designated port of arrival—in direct violation of Congress’s clear command that manner of entry cannot constitute a categorical asylum bar. In addition, the Acting Attorney General and Secretary of Homeland Security promulgated the rule without the required procedural steps and without good cause for immediately putting the rule into effect.

“President Trump’s new asylum ban is illegal,” Omar Jadwat, the director of the ACLU’s Immigrants’ Rights Project, said in a statement. “Neither the president nor his cabinet secretaries can override the clear commands of U.S. law, but that’s exactly what they’re trying to do.”

Baher Azmy, legal director at the Center for Constitutional Rights, which joined the ACLU in filing the suit with the Southern Poverty Law Center, said in a statement, “Ever since the horrors of World War II, the world’s nations have committed to giving asylum seekers the opportunity to seek safe haven. The Trump administration cannot defy this most elementary humanitarian principle, in violation of U.S. and international law, with a flip of a presidential pen.”

Read the full complaint below.