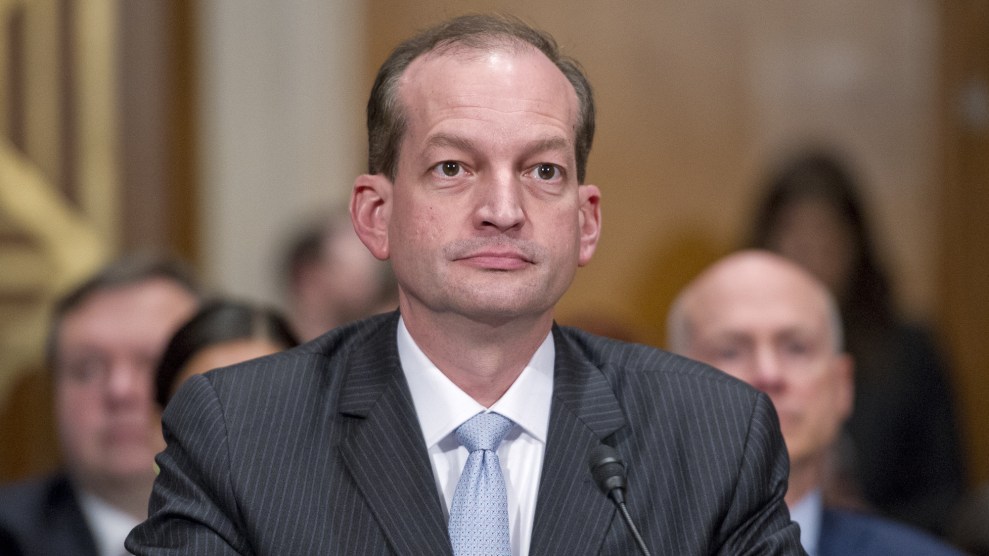 In March 2017 Acosta testified that he could not make details of the plea deal with Epstein public, but would not elaborate as to why.Ron Sachs/CNP via ZUMA Wir

During the March 2017 confirmation hearing for US Secretary of Labor Alexander Acosta, the then-federal prosecutor was grilled by Sen. Tim Kaine (D-Va.) about his role in brokering a plea deal for Palm Beach multi-millionaire Jeffrey Epstein. Back in 2007, Epstein faced a 53-page federal indictment charging Epstein with sex-trafficking and prostitution. Most of the dozens of Epstein’s victims were minors.

But Acosta, then working as the US attorney for Southern Florida based out of Miami, made all of that disappear. He brokered a non-prosecution deal that required Epstein to plead guilty to prostitution charges in state court and register as a sex offender. As the Miami Herald reported on Wednesday, the deal was contingent on Epstein providing “‘valuable consideration’ for unspecified information he supplied to federal investigators.” Shortly after the deal, Epstein was a key witness in the federal prosecution of two Bear Stearns executives for corporate securities fraud. Epstein, a prominent figure in the New York finance world, was one of the largest investors in one of the firm’s hedge funds.

Despite federal law stipulating otherwise, the details of the plea deal were not made available to the victims. During the confirmation hearing, Kaine pushed Acosta on why the agreement wasn’t made public. “If there is something that I have learned or thought about it’s how careful someone should be when something is not made public,” Acosta responded, “because often a very positive outcome—again, not talking about this case but generally—a very positive outcome can become a negative outcome not because of a change in the underlying substance but because by something not looking public it is looked at with suspicion.”

The problem is that the terms of the agreement were, in fact, suspicious. As the Herald reports:

But court records reveal details of the negotiations and the role that Acosta would play in arranging the deal, which scuttled the federal probe into a possible international sex trafficking operation. Among other things, Acosta allowed Epstein’s lawyers unusual freedoms in dictating the terms of the non-prosecution agreement …

During the 13 months Epstein ultimately served, he was allowed to leave his county jail cell freely during the day. These friendly conditions were condemned by Acosta during his confirmation hearing, during which he called them “awful.”

The issues raised by the Miami Herald have also sparked new concerns from Kaine.

“I was extremely concerned about Secretary Acosta’s role in the Epstein deal and pressed him about it at his confirmation hearing,” Kaine wrote in a statement to Mother Jones. “My concern was one of the reasons I opposed his nomination. The Miami Herald report has raised disturbing details about this case and I will closely follow the pending civil litigation challenging whether federal prosecutors broke the law in their handling of the case.”